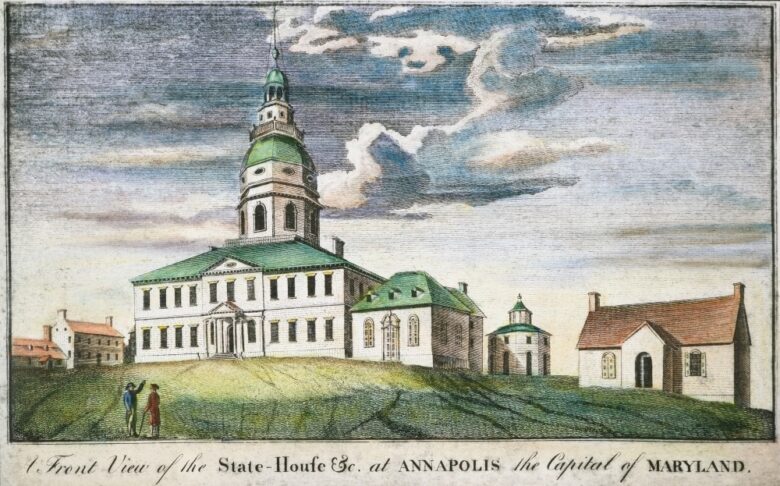 Use this Decision Point immediately following The Articles of Confederation, 1781 Primary Source to help provide students with context for the Constitutional Convention.

On September 12, 1786, a dozen commissioners from five states gathered at Mann’s Tavern in Annapolis, just down the street from the Maryland state house. Their assigned task was to discuss measures to enable the Confederation Congress to regulate interstate and foreign commerce. Instead, when they adjourned two days later, the commissioners had adopted a very different resolution. They invited the states to send commissioners to a second convention, to assemble at Philadelphia in May 1787. Its proposed task would be much more ambitious and open ended. It would “take into consideration the situation of the United States, to devise such further provisions as shall appear to them necessary to render the constitution of the Federal Government adequate to the exigencies of the Union.” The delegates to the Philadelphia Convention would then report their proposed changes to Congress as potential amendments to the Confederation.

The Annapolis commissioners were a small but politically sophisticated group. They included John Dickinson, the lead framer of the Articles of Confederation; Alexander Hamilton, who had served as George Washington’s aide-de-camp through much of the Revolutionary War; James Madison, a veteran member of Congress and Virginia legislator; and Edmund Randolph, soon to become Virginia’s governor. Each believed the Articles of Confederation badly needed amendment; each thought the United States needed a true national government. Each was frustrated by the failure of every previous effort to secure the unanimous approval of all thirteen state legislatures, which was required to amend the Articles.

The Annapolis Convention thus marked a decisive moment in the movement for constitutional reform. Before that point, those who believed the Articles of Confederation left the Continental Congress too weak to govern effectively had followed a strategy of piecemeal reform, hoping the adoption of individual amendments would make people less fearful of the risks of further changes. The first proposed amendment went to the states in February 1781. It would have allowed Congress to collect an impost (or duty) on foreign goods, which it could use primarily to encourage foreign states and investors to loan money to the United States. This amendment failed when tiny Rhode Island refused to approve it and Virginia repealed its initial endorsement.

In April 1783, after extensive debate, Congress proposed a new package of financial amendments, including a revised impost and a proposal to allocate the common expenses of the union among the states not on the basis of land values, as the Articles required, but according to population, with each enslaved African American counting as three-fifths of a free person. A year later, Congress responded to a worsening commercial depression by proposing two more amendments that would vest it with some authority over interstate and foreign commerce. British imports were flooding American markets and threatening the livelihoods of American artisans, while imperial harbors were closed to American ships, thus threatening the profits of American merchants.

None of these amendments secured the required ratification of all thirteen state legislatures. One particular problem was the militant opposition of Rhode Island, one of the nation’s least populous states. Even so, Congress was still considering other amendments in the summer of 1786, when a committee chaired by Charles Pinckney drafted a report with another half-dozen proposals.

By then, however, a different path to reform had emerged in Virginia. At the start of the 1785 Virginia legislation session, Madison began urging his colleagues to endorse the idea of granting Congress permanent regulatory powers over commerce. During the ensuing debates, however, the assembly whittled the proposal down to a point where Madison decided it would be better to do nothing than to pursue a policy that seemed too weak to work. Yet just as the session was closing, a resolution was moved calling for an interstate convention to discuss the idea of giving Congress adequate power over commerce. Madison was not its author, and he initially doubted its prospects. He supported the resolution because it was “better than nothing,” but he still thought that it was “liable to objections and will probably miscarry.”

Yet by the early spring of 1786, when the Virginia commissioners set Annapolis in September as the place and time of meeting, Madison had shifted his opinion. Writing to James Monroe, who had taken his place in the Virginia congressional delegation, Madison argued that “the efforts of bringing about a correction thro’ the medium of Congress have miscarried.” Some other tactic had to be tried. If the planned convention worked in this first instance, it could be repeated again “as the public mind becomes prepared for further remedies.”

The idea of holding a convention to propose constitutional changes remained a source of uncertainty. The Articles of Confederation were quite specific about the rules for their amendment. Changes had to be proposed by Congress, with a supermajority of nine states, and then ratified by all thirteen legislatures. Even holding a convention could be criticized as an insult to Congress and thus work to weaken its authority. Some members jealously guarded the power of the states and resisted the idea of centralizing power in the national government.

Yet the idea of holding a general constitutional convention was not a novelty. Such a proposal had been discussed in the early 1780s. Its strongest supporters were to be found in the officer corps of the Continental Army, arguably the one group whose bitter experience during the war left them most inclined to support a radical strengthening of national authority. No one had a better grasp of the weaknesses of the Confederation, because from one year to the next, they had repeatedly seen how difficult it was for Congress to muster adequate supplies, money, and troops from the states. Their commander in chief, George Washington, may have been a Virginia gentleman, but from 1776 on, he was also a strong nationalist.

Alexander Hamilton shared these nationalist views. After resigning his commission in the Continental Army, Hamilton served in the New York legislature and the Continental Congress in 1782–1783. Once in Congress, he came to know Madison quite well, and together they must have discussed the tactics of constitutional reform. Yet Hamilton was more of a political adventurer than Madison. In 1783, Hamilton was toying with the idea of having Congress issue a call for a general constitutional convention. He abandoned that project because he knew it would not muster the requisite support. But the basic idea retained its appeal.

By the summer of 1786, the deteriorating political situation dictated the conclusions that Hamilton, Madison, and the other Annapolis commissioners now shared. Nevertheless, their decision to propose a general convention to meet in Philadelphia was risky. Not only did it involve a radical change in political strategy, it also marked a desperate gamble with an uncertain outcome. The Continental Congress was essentially bankrupt, and most of the states were balking at levying and collecting the taxes needed to fulfill their financial obligations to the union. And although most nationally oriented political leaders agreed that Congress needed to have its independent sources of revenue and the power to regulate foreign and interstate commerce, there was no firm agreement on what the agenda of a general convention would be.

The appeal issued by the Annapolis Convention was a dangerous gamble, taken by a group of twelve leaders who had no confident idea of how it would turn out. In the spring of 1787, no one was sure whether the Philadelphia Convention would be able to meet the challenges that faced the teetering republic.

1. Which of the following components of the Articles of Confederation frustrated advocates of its reform?

2. Which of the following is not true of the economic situation faced by the United States in the 1780s?

3. Why did some politicians fiercely protect the rights of the states in the Articles of Confederation over the idea of a centralized government?

4. What group was especially open to the idea of a more powerful central government, because of their experience during the Revolutionary War?

5. Which of the following events led many nationalists to articulate the need for a centralized government and lay the foundation for the meeting that would achieve it?

6. What was the original intent of the Annapolis Convention?

7. Who did not support the idea of strengthening the national government by amending or altering the Articles of Confederation?

8. Which of the following describes the primary issue that galvanized nationalists to try to reform the Articles of Confederation?

“That there are important defects in the system of the Federal Government is acknowledged by the Acts of all those States, which have concurred in the present Meeting; That the defects, upon a closer examination, may be found greater and more numerous, than even these acts imply, is at least so far probable, from the embarrassments which characterise the present State of our national affairs—foreign and domestic, as may reasonably be supposed to merit a deliberate and candid discussion, in some mode, which will unite the Sentiments and Councils of all the States. In the choice of the mode your Commissioners are of opinion, that a Convention of Deputies from the different States, for the special and sole purpose of entering into this investigation, and digesting a plan for supplying such defects as may be discovered to exist, will be entitled to a preference from consideration, which will occur, without being particularised.”

Address of the Annapolis Convention, 1786

1. Which of the following was a direct result of the sentiments explained in the excerpt provided?

2. Which of the following gives the excerpt historical context?

“The disinclination of the individual States to yield competent powers to Congress for the [Federal] Government—their unreasonable jealousy of that body & of one another—& the disposition which seems to pervade each, of being all-wise & all-powerful within itself, will, if there is not a change in the system, be our [downfall] as a Nation. This is as clear to me as the A, B.C.; & I think we have opposed Great Britain, & have arrived at the present state of peace & independency, to very little purpose, if we cannot conquer our own prejudices. The powers of Europe begin to see this, & our newly acquired friends the British, are already & professedly acting upon this ground; & wisely too, if we are determined to persevere in our folly. They know that individual opposition to their measures is futile, &boast that we are not sufficiently united as a Nation to give a general one! Is not the indignity alone, of this declaration, while we are in the very act of peace-making & conciliation, sufficient to stimulate us to vest more extensive & adequate powers in the sovereign of these United States?”

3. Which characteristic of the Articles of Confederation was the focus of reform for the Annapolis Convention?

4. Which Revolutionary idea and prevailing political norm was challenged by the address provided?

5. The excerpt reflects a growing belief among a small group of elite individuals that

“An attack was made on Thursday last by a party of Insurgents under Shays, upon the troops commanded by General Shephard at Springfield. . . . Shays retreated that night to Ludlow, and the next day marched to Chicabee.”

6. The “Insurgents” described in the newspaper article provided were most likely influenced by which of the following?

7. What was an indirect result of the turmoil caused by actions such as the one described in the article provided?

Meyerson, Michael I. Liberty’s Blueprint: How Madison and Hamilton Wrote the Federalist Papers, Defined the Constitution, and Made Democracy Safe for the World. New York: Basic Books, 2008.

Morris, Richard B. Witnesses at the Creation: Hamilton, Madison, Jay, and the Constitution. New York: Holt, Rinehart, and Winston, 1985.