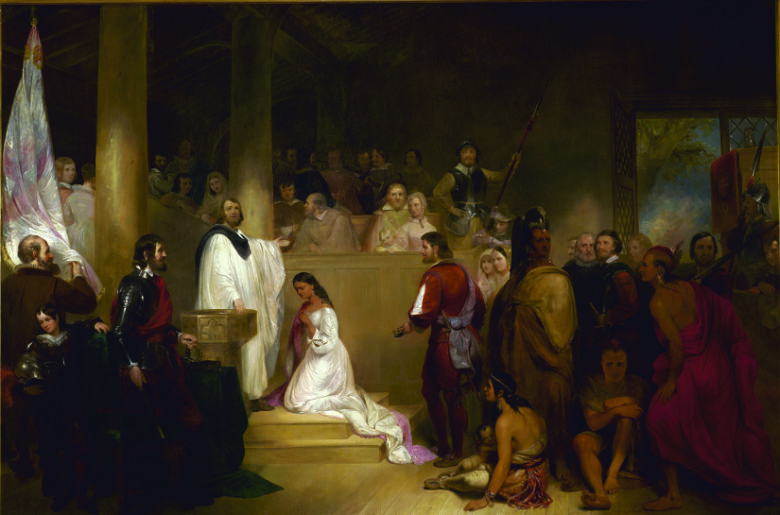 This Narrative should be assigned to students at the beginning of Chapter 2, following The English Come to America Narrative. After reading this Narrative, students can further explore tensions between English settlers and American Indians in the Bacon’s Rebellion Narrative and the Decision Point on King Philip’s War

In 1609, Powhatan, the powerful ruler who controlled most of the tribes in the Chesapeake region, became wary of the English settlers who had built the fort on Jamestown Island. The colony seemed to be growing. Regular supply ships arrived from England, and with each ship came more settlers. During the winter of 1609-1610, Powhatan laid siege to Jamestown. We cannot be certain why. Perhaps he wanted to destroy the colony. Perhaps he only wanted to weaken it significantly. In either case, the Powhatan people refused to trade food with the English, whom they sometimes attacked and killed when the settlers ventured outside the Jamestown fort. The English entered into the period they called the “starving time.” Five hundred strong at the beginning of the siege, by May 1610 they had dwindled to sixty. That winter, they ate all their domestic livestock, as well as rats and snakes, and even resorted to cannibalism to survive. They abandoned the fort in June 1610 to make their way back to England. As they departed down the James River, they met the new governor, Lord De La Warr, and much-needed supply ships. De La Warr ordered them to return to Jamestown.

Tensions between the Powhatan and the English did not end, however. Powhatan sustained his attacks on the settlers, and the English retaliated. In August 1610, the English besieged a Powhatan confederation village, cutting down corn fields, burning houses, and killing the queen and all her children. Relationships remained tense. In 1613, Powhatan’s daughter, Pocahontas, was lured aboard an English ship and held hostage at Jamestown. While living there, she converted to Christianity, took the name Rebecca, and married a colonist named John Rolfe. Powhatan supported the marriage. For Europeans and American Indians, marriage was a traditional way to cement an alliance between two peoples. Powhatan did, after all, have enemies to his west, and an alliance with the English could help to keep these enemies, the Monacans, at bay. The marriage of Pocahontas and John Rolfe brought a period of relative peace between settlers and the Powhatan people. It concluded the period historians refer to as the First Anglo-Powhatan War, and the English settlement grew.

In 1615, Pocahontas gave birth to a son. The following year she, John Rolfe, and their son traveled to England. The trip was an opportunity for Rolfe to cement his business connections for the growing tobacco trade. Several Powhatan Indians accompanied them to see England firsthand and report back. Pocahontas did not return to Virginia. She died and was buried at Gravesend, England, in March 1617. John Rolfe returned. So did Tomocomo, Uttamatomakkin, and other members of the Powhatan delegation. Perhaps they understood that the English would continue to come to Virginia in ever-increasing numbers.

In April 1618, Powhatan died and was replaced by his brother, Opitchapam. Another brother, Opechancanough, served as the chief responsible for diplomacy and the military. The last several years of Powhatan’s life had been relatively peaceful, but Opechancanough was not inclined to tolerate the growing numbers of English settlers. He decided to make clear that the English lived in the Chesapeake region at the pleasure of the Powhatan. Like the many tribes assembled in the Powhatan confederation, they owed fealty to Opitchapam. Over the next two years, Opechancanough carefully planned a strategy to subjugate the English, who were growing in number and expanding geographically.

By the 1620s, the series of English settlements, or plantations, along the James River had expanded significantly. Tobacco was a profitable crop, but it required a great deal of land. And it required labor. In 1618, the Virginia Company of London had established the headright system, granting fifty acres of land to anyone who paid for his own or another Englishman’s transport to Virginia. The settlers came to Jamestown mostly as indentured servants, who were bound to work for three to seven years to pay off the cost of their passage. If they survived to the end of their terms, they would usually receive a small bounty and could then buy their own property to farm. The first Africans were probably indentured servants, until racial attitudes hardened and the decreasing migration of indentured servants from England led to the practice of enslaving Africans for life. As the population expanded, so did land ownership. Increasingly, the Powhatan saw their cornfields and landscape give way to English tobacco fields.

Commerce and exchange had encouraged peace between the two cultures. English settlers, believing they were safe, allowed the Powhatan to come and go openly in the settlements. Then, on March 22, 1622, Opechancanough orchestrated a coordinated attack. In settlements along the James River, Powhatans entered ostensibly as friends. At a prearranged signal, they pulled out weapons and attacked, slaughtering men, women, and children in the fields and homes of several plantations. Jamestown was warned and took steps to defend itself, but nearly everywhere else the attack was devastating. Plantations were destroyed and burned. The Powhatan killed 347 people, or one-third of the English population. This Massacre of 1622 (as the settlers called it) launched what historians call the Second Anglo-Powhatan War.

Opitchapam and Opechancanough did not press their advantage and continue the attack, leaving some historians to believe that perhaps their purpose was not to eradicate the English presence. Rather, they may have wanted to make clear that the English lived there at their pleasure. Other historians argue that Openchancanough tried to debilitate the English to the point where they would abandon the settlements. The chief predicted, “Before the end of two Moons there should not be an Englishmen in all their Countries.”

For the English, however, the attack signaled that the American Indians had to be conquered. Hostilities continued, and the English, isolated and struggling to feed and defend themselves, suffered a second starving time during the winter of 1622-1623. In organized campaigns against the Powhatan, the English burned villages, destroyed crops, and killed warriors, women, and children. The Powhatan responded with raids and attacks against English settlers. In May, Captain William Tucker held peace negotiations and concluded by providing a toast that poisoned and sickened more than two hundred Powhatans. Then the English fired on the Indians and killed several.

The next year, the combatants met in a two-day battle that ended with Indian cornfields destroyed and the Powhatans in retreat. By 1632, the two sides had fought to a draw, and they negotiated a peace. But the balance of power had shifted to the English. More settlers continued to arrive: By the 1640s, there were more than eight thousand. They outnumbered the Powhatan living in the region and continued to expand along the James and York Rivers and up into the middle and northern peninsulas of Virginia. Englishmen had taken land everywhere in the Chesapeake, from the James River to the Potomac River and across the bay to the continent’s eastern shore.

Opechancanough became paramount chief in 1629. In 1644, he launched another ferocious attack that killed more than 400 English settlers, but by then, that represented only a small fraction of their number. The settlers struck back with equal ferocity. In 1646, they captured Opechancanough at his fort on the Pamunkey River. They brought him to Jamestown in chains and treated him like a curiosity on display. English settlers came to gawk at him. Within two weeks he was murdered by one of his guards. His successor, Necotowance, concluded a peace treaty with English governor William Berkeley. Never again, Necotowance pledged, would the Powhatan “wrong the English in any kind, but they would ever hold love and friendship together.”

The interactions between the American Indians and English in the first 40 years of Virginia settlement were often turbulent and fraught with violence. Each side struggled to dominate and control the contested lands and their bounty, but in the end, the Powhatan could not counter the constant arrival of new English colonists who spread across the Chesapeake region. The expanding English colony steadily displaced native people and established a pattern that was repeated over the next two centuries.

1. The “headright system” established in 1616 by the Virginia Company of London is best described as

2. John Rolfe was responsible for

3. After the “starving time” in the winter of 1609-1610, there was a brief period of peaceful coexistence between the English and Powhatans. What was the main reason for this time of peace?

4. The event that directly led to the Second Anglo-Powhatan War was

5. What happened to Anglo-Powhatan relations after the death of Opechancanough?

6. Which statement best describes the precedent established by interaction between the English and Powhatan during the first half of the seventeenth century?

“When the day appointed for the massacre had arrived, a number of the savages visited many of our people in their dwellings, and while partaking with them of their meal the savages, at a given signal, drew their weapons and fell upon us murdering and killing everybody they could reach sparing neither women nor children, as well inside as outside the dwellings. In this attack 347 of the English of both sexes and all ages were killed. Simply killing our people did not satisfy their inhuman nature, they dragged the dead bodies all over the country, tearing them limb from limb, and carrying the pieces in triumph around. . . .

When the occurrence of this massacre became known in the mother country, the English were ordered to take revenge by destroying with fire and sword everything of the Indians; consequently they . . . destroyed both the houses and crops of the Indians, took Opechankenough [Powhatan] prisoner and shot him on the very place where his house stood before it was burned down. On this spot the English then built a new town. By these means the Indians became very much subdued and lived in constant dread of the English.

The English in the meantime became thereafter more prudent in their dealings with the Indians. Moreover, the King of England sent from his arsenals all sort of weapons and ammunition and ordered his subjects to more and more cultivate the land and bring the Indians into submission.”

Taken from Voyage of Anthony Chester, 1707, an account written by an unknown passenger of the ship Margaret and John, which left England in December 1620 bound for Virginia

1. The excerpt best supports which of the following conclusions?

2. Which statement about the Anglo-Powhatan Wars is best supported by the excerpt?

A Relation of the Barbarous Massacre: http://www.loc.gov/teachers/classroommaterials/presentationsandactivities/presentations/timeline/colonial/indians/massacre.html

Horn, James. A Land as God Made It: Jamestown and the Birth of America. New York: Basic Books, 2005.

Price, David A. Love and Hate in Jamestown: John Smith, Pocahontas, and the Heart of a New Nation. New York: Knopf, 2003.

Williams, Tony. The Jamestown Experiment: The Remarkable Story of the Enterprising Colony and the Unexpected Results That Shaped America. Naperville: Sourcebooks, 2011.