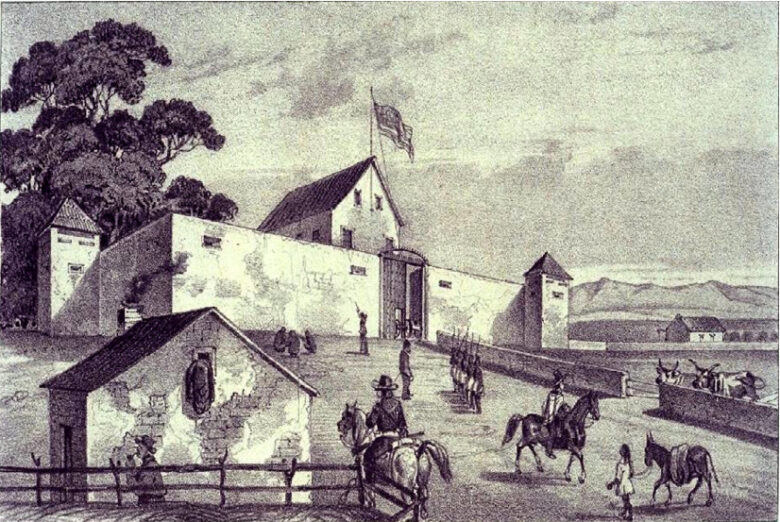 Use this Narrative alongside the Migration West Decision Point to allow students to explore the various motivations people had for moving westward.

“Gold! Gold! Gold from the American River!” Newspaper editor and businessman Samuel Brannan ran down the street in Sacramento shouting the news that gold had been discovered in California. The Mormon entrepreneur then began to promote the story, because he owned the only store between San Francisco and the site of the discovery. When he heard about the gold, he bought up all the picks, shovels, and pans he could, and when men began traveling to the American River to search for gold, he sold those tools to them at a tremendous profit. Promoting the rush to the gold fields, Brannan made it seem as if riches would be easily found. He had purchased for twenty cents each pans used to sift for gold and sold them to prospectors for fifteen dollars apiece. He also began buying and reselling land as more people moved to California. Such ventures soon made him a millionaire. Brannan’s promotion of the gold rush illustrated both the myth and the reality of the experience for the many thousands of prospectors who went to California in hope of finding gold.

Gold had been found in California when it was still part of Mexico, but it was too far away and the costs involved made it economically prohibitive to pursue the discovery. Instead, the foundation of the gold rush was laid in the dreams of a German-born Swiss businessman, John Sutter (his actual name was Johann Suter). Sutter fled Europe for the United States to escape his debts. Seeking a fortune, he traveled widely and eventually came to California, where, in 1840, he convinced the Mexican governor to grant him thousands of acres of land in the northern Central Valley. He promised to build a colony that would serve as a buffer against American Indians as well as encroachments by the United States and Russia.

Sutter built a fort and trading post along the Sacramento River and began making plans for a New Helvetia or “New Switzerland,” as he called his colony. Although he established good relationships with some of the American Indians in the area, others he treated badly, forcing them to work for him. As his plans progressed, Sutter began laying out town sites and prepared to promote his colony to settlers as an agrarian paradise.

Part of Sutter’s preparation was the building of a sawmill that would produce the boards needed to construct buildings in his new colony. In early 1848, Sutter sent one of his most trusted employees, a carpenter named James W. Marshall, who had migrated west from New Jersey, to build a water-powered mill on the South Fork of the American River, near present-day Coloma, California. Sutter offered Marshall a partnership in the mill, and the carpenter set to work, supervising a construction group made up mostly of Mormons who had moved west to find jobs.

Marshall also began to explore the area and, on January 24, 1848, he found flakes of gold in the river bed. He told Sutter, who asked him and the other workers to keep the find a secret while he tried to get clear title to the land. The validity of Sutter’s land claim was unclear because the Mexican-American War had only recently ended and the territory was now part of the United States. But the plan to keep the gold a secret soon went awry. One of the workers took some of the gold and made purchases at Sam Brannan’s store, located near Sutter’s headquarters in Sacramento. Ironically, Brannan was unable to print the story of the discovery in the newspaper he published because his staff all left the office and headed for the gold fields. As mentioned at the beginning of this section, he saw his opportunity and seized the moment, announcing the find himself and buying up land and supplies that he sold to prospectors at a tremendous profit.

Because communications were slow, it took nearly a year for the news to spread to the East Coast. Once it became known, people began moving west. In 1849, thousands of prospectors headed for California hoping to find gold, obtain land, or start a business supplying miners. Some also came to help fulfill America’s Manifest Destiny” to become a continental nation. So many went west that the term “’49ers” was applied not only to those who arrived that year but also to those who followed. Between 1848 and 1855, more than 300,000 people moved to California in search of gold. Most were men, and the majority were white. But there were also some women, African Americans, and immigrants from many different countries. Europeans came in great numbers, and Chinese workers were later imported to work in the mines and on the railroads. The gold rush brought rapid population growth and a tremendous amount of diversity.

By 1850, California had more than enough people to apply for statehood and did so. This set off a firestorm about the territorial expansion of slavery, because part of the state was south of the 36°30′ latitudinal line set by the 1820 Missouri Compromise as the dividing line between free and slave territory. Although the Missouri Compromise line applied only to land that was part of the United States at the time of its adoption, many presumed that slavery would be allowed south of the line as the nation expanded. The resulting Compromise of 1850 dampened the political controversy over slavery, but the gold rush continued.

The arrival of so many 49ers ended the California dream of John Sutter, however. He failed to establish title to the land, and he ended up having to sell what was left of his colony to pay his debts. James Marshall also lost everything because he could not find employees for his sawmill when everyone wanted to find gold instead. He later invested in an unsuccessful mine and died penniless.

Some 49ers moved to California in hope of finding the mythical El Dorado, a term used by Spanish explorers who had searched for a golden kingdom they believed existed in the New World. Few found such incredible wealth. Prospectors engaged in placer mining, panning for gold in streambeds, and digging with picks and shovels. They then sifted through the ore in a sluice that carried water, allowing them to separate gold from dirt and rock. But to develop a mine required the methods of hard-rock mining, using technology and labor to tunnel deep into the ground. Companies hired employees who worked in shifts, engineering tunnels and shoring them up with timber, using steam-powered stamps to crush tons of ore, and then chemicals to separate out the minerals. Such expensive techniques took a toll on the environment as mining companies cut down forests and polluted streams. Some used hydraulic mining technology that used water to blast away the earth in strip mining. Hard-rock mining was dangerous and caused the death or injury of miners. That harsh reality clashed with the romantic image of the prospector with his burro, pick, and pan.

But for the 49ers and those who followed in the early 1850s, the romance of the gold rush made anything seem possible. Long wagon trains moved westward across the continent, and ships brought miners to California from around the world. In addition to wealth and the possibility of a better life, some simply sought adventure. Men vastly outnumbered women, an imbalance that continued in California and the West for decades to come. Some women were able to parley this to their advantage, getting their passage to California paid or promoting their business interests. Other women found harsh conditions, and some ended up working as prostitutes in the mining camps.

Other factors influenced the experience of individuals. White miners tended to do better than African Americans or Latinos, especially because the state of California levied a mining tax on nonwhites. Exploited as a cheap labor force, Chinese 49ers faced racism and discrimination that would eventually lead to the prohibition of their immigration during the rising tide of anti-immigrant, nativist sentiment in the late nineteenth century. The American Indians of California lost their land and culture, and many died of diseases brought by the 49ers. Clearly, not everyone found the gold rush romantic.

The myth of the 49ers does not include storekeepers, but some men, like Sam Brannan, got rich by supplying the prospectors. Another who did so was Levi Strauss, a merchant who began selling the miners denim overalls. As for the 49ers themselves, some lost their lives, while others went bankrupt and returned home “busted.” A few struck it rich. Almost all found conditions in the gold fields to be much harsher than they expected. Still, most got what they wanted when they headed to California. They did not really expect to find El Dorado. Instead, they hoped to make enough to pay off debts, enlarge their business, or buy more land when they returned home. After deducting expenses, more than half the 49ers managed to turn a profit and realize the dream they went west to fulfill. Although the reality was far different from the myth, the majority managed to make a little money from their grand adventure.

2. Which best characterizes those who came to California during the gold rush?

4. In California during the mid-nineteenth century and prior to the Civil War, there were significant economic opportunities for entrepreneurs

5. The California gold rush resulted in

6. The increased demographic diversity caused by the California gold rush resulted in

1. The advertisement reflects which continuity in U.S. history?

2. The events depicted in this advertisement most directly led to

3. Advertisements like the one provided were most directly shaped by

Mason, RB. “Official Report on the Gold Mines.” Museum of the City of San Francisco. 1848. http://www.sfmuseum.org/hist6/masonrpt.html