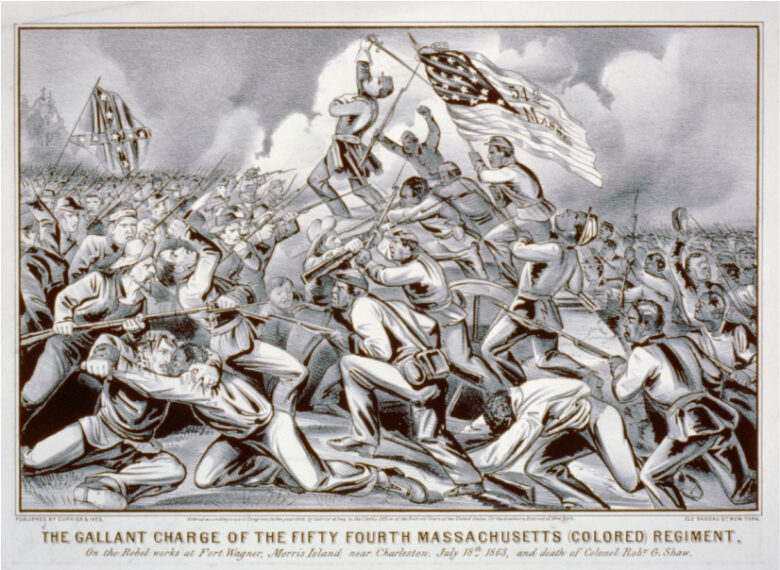 Use this Narrative to provide students an example of the experiences of African Americans fighting during the Civil War.

Colonel Robert Gould Shaw was born in Boston, Massachusetts, on October 10, 1837, to a large, wealthy family that valued education and adhered to abolitionist principles. Shaw’s parents became active members of the American Anti-Slavery Society in 1838, and the Shaw family were close friends of William Lloyd Garrison, the publisher of The Liberator, an abolitionist periodical. Shaw also knew Harriett Beecher Stowe, author of Uncle Tom’s Cabin (1852), and corresponded with women’s rights advocate and abolitionist Lydia Maria Child throughout his adult life. As a young man, Shaw studied French, Latin, Spanish, and Greek, and attended Jesuit Saint John’s College in Fordham, New York. In the early 1850s, he also traveled widely in Europe with his family. While in Switzerland, he read Uncle Tom’s Cabin, which influenced the formation of his identity and his political views. He later graduated from Harvard College, attended antislavery sermons in Boston, and read key abolitionist texts such as Hinton Rowan Helper’s The Impending Crisis of the South(1857). Upon the completion of his studies, Shaw settled in Staten Island, New York.

During the secession crisis of 1860-1861, Shaw joined other members of wealthy, elite society in the Seventh New York Militia, which drilled and prepared for war. He left for the war with full abolitionist fervor, believing the “Slave Power” aristocracy of the South had dominated the United States for too long. He also sought the immediate restoration of the Union – the primary motivation of most Union enlistees in 1861. When the Seventh New York Militia disbanded later that spring, Shaw secured an officer’s commission in the Second Massachusetts Infantry. He received a second lieutenant’s commission and served for 20 months in the regiment, experiencing action at Front Royal and Cedar Mountain in the summer of 1862 during Thomas “Stonewall” Jackson’s 1862 Shenandoah Valley Campaign. His regiment was badly bloodied at Antietam later that September. Shaw himself was wounded slightly at both Front Royal and Antietam.

The U.S. Congress empowered the War Department to enroll free or enslaved black men in the Union Army on July 17, 1862. Between 1862 and 1865, approximately 179,000 African American soldiers served under the direction of the U.S. War Department’s Bureau of Colored Troops. This included 145 infantry regiments, seven cavalry organizations, one engineering battalion, and 13 artillery units. Approximately 74 percent of Northern black men of military age (18-45 years) served in the Union Army during the war – an astonishingly high figure. The black regiments in the Union Army served in 449 different engagements; almost 40,000 of them were killed or died of disease. Racial atrocities at Fort Pillow, Tennessee; “the Crater” at Petersburg, Virginia; and Plymouth, North Carolina, among other engagements, were indicative of the incredible danger of enlistment for black men, who were regarded by Confederates as rebellious slaves. This meant they were rarely granted prisoner-of-war status when surrendering, and if captured in battle, they were then enslaved if not killed outright.

The Fifty-fourth Massachusetts Volunteer Infantry was a personal project of Governor John Andrew of Massachusetts, who offered Shaw, then a captain, the command of the “colored regiment” in early 1863. Recruitment for the regiment, one of the first all-black units recruited in a Northern state during the war, was led by Frederick Douglass and numerous prominent black leaders. Douglass even enrolled his own sons Lewis and Charles. Recruits came from New York, Buffalo, Cincinnati, Boston, and many other areas of the North.

Like many black Union regiments, the Fifty-fourth Massachusetts regiment engaged in labor duty rather than fighting and its men were paid as laborers, not combat soldiers. However, some fought in combat regardless. Others served in ancillary logistical roles, doing block house duty, guarding bridges and supply trains, and working in labor details to free up white Union Army units for combat duty. Black regiments suffered high mortality rates due to disease and labor duty. At first they were led exclusively by white officers, who were selected by a more rigorous process than for white Union army units. During the course of their enlistment, black Union soldiers also protested the official pay discrimination of the U.S. government, which authorized white soldiers to be paid $13 per month but black soldiers $10, with $3 withheld to pay for their clothing. It was not until June 1864 that Congress passed an equal pay bill for all men who had been free by April 19, 1861.

The combat experience of the Fifty-fourth regiment was both heroic and deadly. On July 18, 1863, the regiment spearheaded an assault on Confederate Battery Wagner on Morris Island, South Carolina (the Second Battle of Fort Wagner, shown in, an important fortification guarding the approaches to Charleston and its harbor. During the charge, Shaw’s men fell under withering fire from Confederate cannoneers and rifle muskets within 200 yards of the fort. The fort’s defenders had largely been unhurt by the preparatory Union bombardment, which had fired 9,000 shells. Roughly half the Fifty-fourth regiment stormed over the parapets and pushed their way inside the fort, holding the ramparts for approximately one hour before being driven back. The white Union regiments that followed in support also failed to carry it. One of the men who served in the Fifty-fourth and saw combat on Morris Island was Lewis Douglass, son of the famous abolitionist and recruiter of black troops, Frederick Douglass. The young soldier was grievously wounded but survived.

During the engagement, 272 of Fifty-fourth Massachusetts’ 600 engaged men were killed, wounded, or captured, including Colonel Shaw, whose body was never recovered. Confederate General Johnson Hagood, who commanded the 1,700 defenders, had such contempt for abolitionists that he ordered a large trench dug in front of the fort and the bodies of 20 of Shaw’s men thrown on top of him and then covered with sand. Confederates sustained only 174 casualties in the attack. The Fifty-fourth also fought in the February 20, 1864, Battle of Olustee, Florida, and subsequently at the Battle of Honey Hill on November 30, 1864, during William Tecumseh Sherman’s march from Atlanta to Savannah, the “March to the Sea.” The regiment was discharged at Boston, Massachusetts, in September 1865.

Years later, in 1897, sculptor Augustus Saint-Gaudens unveiled his monument on Boston Common known as “The Shaw Memorial,” which depicted the colonel and his regiment marching to war. By the end of the war, nearly 179,000 African Americans had served in the U.S. Army and 19,000 in the Navy, fighting for liberty in a country that had denied them their essential rights. At the end of the war, President Lincoln supported the Thirteenth Amendment ending slavery and proposed to give the vote to black men who had fought for the Union.

1. Which African American abolitionist played a role in the formation of the Fifty-fourth Massachusetts?

2. For what battle is the Fifty-fourth Massachusetts best known?

3. The Fifty-fourth Massachusetts project was created by

4. The significance of the Battle of Fort Wagner was that

5. What work most influenced Robert Gould Shaw’s thinking on slavery and abolition?

“Oh! not in vain those heros [sic] fell,
Amid those hours of fearful strife;
Each dying heart poured out a balm
To heal the wounded nation’s life.
And from the soil drenched with their blood,
The fairest flowers of peace shall bloom;
And history cull rich laurels there,
To deck each martyr hero’s tomb. . . .
And ages yet uncrossed with life,
As sacred urns, do hold each mound
Where sleep the loyal, true, and brave
In freedom’s consecrated ground.”

1. The context of the main idea expressed in the poem is best described as

2. What was the main idea of this poem?