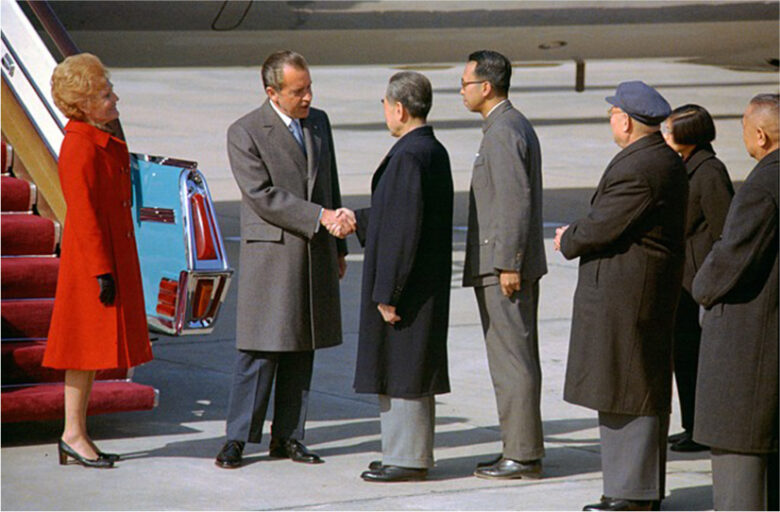 Use this Narrative toward the beginning of the chapter to discuss foreign policy during Nixon’s presidency and the importance of his visit to the People’s Republic of China.

From February 21 to 28, 1972, President Richard Nixon became the first president to visit the People’s Republic of China (PRC), traveling there specifically for talks with communist leader Mao Zedong. The visit, which Nixon dubbed “the week that changed the world,” produced great theater. Nixon met with Mao in the leader’s study, toured the Great Wall of China with First Lady Pat Nixon, and attended a banquet in his honor with Chinese Premier Zhou Enlai.

Meetings between American and Soviet leaders had happened many times over the preceding years. Called summits, these meetings typically produced improved relations between the two superpowers. For example, Nixon’s meeting with his Soviet counterpart Leonid Brezhnev in 1971 led to an arms control agreement known as the Strategic Arms Limitation Treaty (SALT), cultural exchanges, and a trade agreement. The thaw in U.S.-Soviet relations was part of a Nixon strategy known as détente, a means to lessen tensions between the two superpowers and possibly use the Soviets to apply pressure on their North Vietnamese ally to negotiate an end to the Vietnam War.

That Nixon would be the first president to visit “Red China” and negotiate with Mao would have shocked partisans on both sides in the 1950s. The communists had established the PRC in October 1949, after a long civil war that resulted in a communist victory over the American-backed government of Chiang Kai-shek. Chiang fled to Taiwan and installed his Guomindang government on the island. Mao turned to the Soviets for assistance in building up China, securing economic and military aid from Stalin in 1950.

The Americans isolated the PRC and backed Taiwan as the legitimate government of China, refusing to allow the PRC a seat in the United Nations (UN). The Korean War (1950-1953) pitted the two countries against each other again after China intervened in the conflict to support North Korea. At home, anti-communists charged the Truman administration and the Democrats with the “loss” of China to the communists. During his time in the House and Senate, Nixon fervently supported the domestic anti-communism that dominated the politics of the late 1940s and early 1950s, and he strongly backed the effort to keep Mao’s China out of the UN.

Nixon had been chosen as Dwight Eisenhower’s running mate in 1952 in part because of his anti-communist and conservative credentials. He played the role very well during his eight years as vice president. His defeats in the 1960 presidential election (by John F. Kennedy) and in the California gubernatorial race (by Edmund “Pat” Brown) two years later seemed to end Nixon’s political career. However, he regained his stature in the Republican Party and faithfully supported Barry Goldwater in 1964. By 1967, he was well poised to be the frontrunner for the Republican nomination in 1968. With the Democrats experiencing huge problems as a result of the Vietnam War, anti-war protests, race riots, and civil unrest at home, Nixon understood that the GOP had a strong chance of winning the election that year.

In 1967, Nixon’s article “Asia After Vietnam” was published in the distinguished journal Foreign Affairs. In it, Nixon argued that although Vietnam had occupied a significant part of the nation’s attention, development of the economies of the region should be important new goals of American diplomacy. But more than that, Nixon hinted that a new relationship with China could be initiated, and that the United States could begin to end its role in Vietnam by adopting a policy designed to support the South Vietnamese government militarily while ending direct American involvement. The influential article burnished Nixon’s foreign policy credentials.

Both policies came into effect once Nixon became president. He began to withdraw American troops from the war in 1970, after a disastrous invasion of neighboring Cambodia led to massive anti-war protests on college campuses. Nixon “Vietnamized” the war, and by the time of his reelection in 1972, fewer than 100,000 American troops remained in the South.

The opening of China came about thanks to a strategic convergence of events after 1969. Mao had earlier unleashed two disastrous social revolutions in China within a decade’s time. The first was the Great Leap Forward, designed to communalize agriculture and end private ownership of property. Mao encouraged false production statistics and had peasants produce steel in backyard furnaces, melting every metal utensil and cooking pot they could find. But collectivized agriculture was less productive than individual land ownership. China exported many of the commodities it produced in order to repay its debts to the Soviet Union; from 1958 to 1961, however, a famine killed as many as 40 million Chinese people. Mao was rebuked and his power ended.

Five years later, after regaining power and aligning himself with the military, Mao launched the Great Proletarian Cultural Revolution to promote his view of communism. The Cultural Revolution was a disastrous period lasting nearly 10 years (with its high point from 1965 to 1969). The economy was shut down, students roamed the streets punishing those suspected of pro-capitalist “revisionism” against Mao, and a reign of terror featuring massacres of perceived enemies was the norm until Mao changed course and used the military to crack down on the very people he had once encouraged. The regime killed between five and ten million of its own people and imprisoned millions of other supposed enemies of the state during this period.

Meanwhile, relations between the Soviet Union and China disintegrated, and by the time Nixon took office in January 1969, the Soviets and Chinese were openly at war with each other on the Ussuri River. The Soviets even asked how Nixon would respond if they should use nuclear weapons against the Chinese. The president was aghast and said he would not approve.

Because of America’s interest in getting out of Vietnam and China’s interest in reopening itself to the world after the catastrophes of the Great Leap Forward and the Cultural Revolution, both countries had reason to improve relations. Nixon saw an opening, and his national security advisor Henry Kissinger used the Pakistani government as a secret channel to begin talks with China’s Zhou Enlai. Feigning an illness while visiting Pakistan, Kissinger secretly traveled to Beijing for talks with Zhou, which he saw as “historic.” In February 1971, he secured an invitation from Zhou for Nixon to visit China.

Vietnam and Taiwan were major stumbling blocks for both countries on the path to improved relations, however, with the Chinese insisting that the United States break off its relations with Taiwan before relations with China could be normalized. Kissinger and Nixon, for their part, clearly wanted the Chinese to play a role in pressuring the North Vietnamese to negotiate an end to the conflict in Vietnam. Talks were already going on in Paris between Kissinger and North Vietnamese Foreign Minister Le Duc Tho. In April 1971, a U.S. table tennis team was in Japan when they were invited to play in China. This bit of “ping pong diplomacy” represented the first contact between Chinese and American citizens since 1949, a symbol of the hope for improved relations between the two countries.

In June 1971, Nixon stunned the world when he announced he would go to China to meet with Mao. He equally shocked conservative anti-communists, who saw the meeting as a betrayal of America’s Taiwanese ally, with criticism coming particularly from William F. Buckley Jr.’s magazine National Review. On February 21, 1972, Nixon was greeted in Beijing by Zhou Enlai and met with Mao for several hours, discussing the pathway to normalized relations. Then he toured the country and met with prominent Chinese leaders. Final talks at Shanghai produced an agreement to facilitate the normalization of diplomatic relations between the two powers, known as the Shanghai Communiqué. In the agreement, the two sides worked toward diplomatic recognition, with the Nixon administration agreeing that as a result of this normalization, the United States would end its official recognition of Taiwan and withdraw military forces from the island, which China claimed was part of its “People’s Republic.”

On returning from the trip, Nixon immediately reported to a joint session of Congress. His approval ratings shot up, making it clear that the American public approved of his historic trip. However, the Taiwanese government did not approve of Nixon’s opening of relations with China. As a result, Nixon sent California governor Ronald Reagan to assure the Taiwanese that they had nothing to fear, although the Shanghai Communiqué showed that the only way for the United States to normalize relations was to end its support for Taiwan.

Normalization of relations with China was not fully achieved until 1979, when Jimmy Carter and China’s new leader Deng Xiaoping reached an agreement including, as an essential component, that the United States would fulfill its promise to cut off recognition of Taiwan. Zhou Enlai died in early 1976 and Mao a few months later, and Chiang Kai-shek was gone too. Seven years after Nixon’s historic trip, China entered the United Nations and, under the leadership of Deng, soon became a dominant power in Asia and the world economy. Nixon’s opening of China secured the rise of that nation to great-power status. It is unclear what it had achieved for the United States, which, in the ensuing years, faced a government in China often opposed to its interests in Asia and elsewhere.

1. Why were the Chinese interested in meeting with Nixon?

2. U.S. recognition of Taiwan marked a turning point in the normalization of relations with China because

3. Initially, the United States refused to open diplomatic relations with the People’s Republic of China for all the following reasons except

4. Before he was elected president, Richard Nixon wrote in his essay “Asia after Vietnam” that the United States should

5. All the following were major issues the United States and China needed to deal with before they could open normal diplomatic relations except

6. Conservative anti-communists in the United States viewed President Nixon’s visit to China as

“13. Both sides view bilateral trade as another area from which mutual benefit can be derived, and agreed that economic relations based on equality and mutual benefit are in the interest of the peoples of the two countries. They agree to facilitate the progressive development of trade between their two countries.

14. The two sides agreed that they will stay in contact through various channels, including the sending of a senior US representative to Peking from time to time for concrete consultations to further the normalization of relations between the two countries and continue to exchange views on issues of common interest.

Joint Communiqué of the United States of America and the People’s Republic of China (Shanghai Communiqué), February 28, 1972

1. Which of the following best describes the context relevant to the excerpt?

2. Those who criticize the sentiments expressed in the excerpt would most likely also criticize

3. The excerpt of the communiqué provides evidence for which of the following in regard to American foreign policy goals?