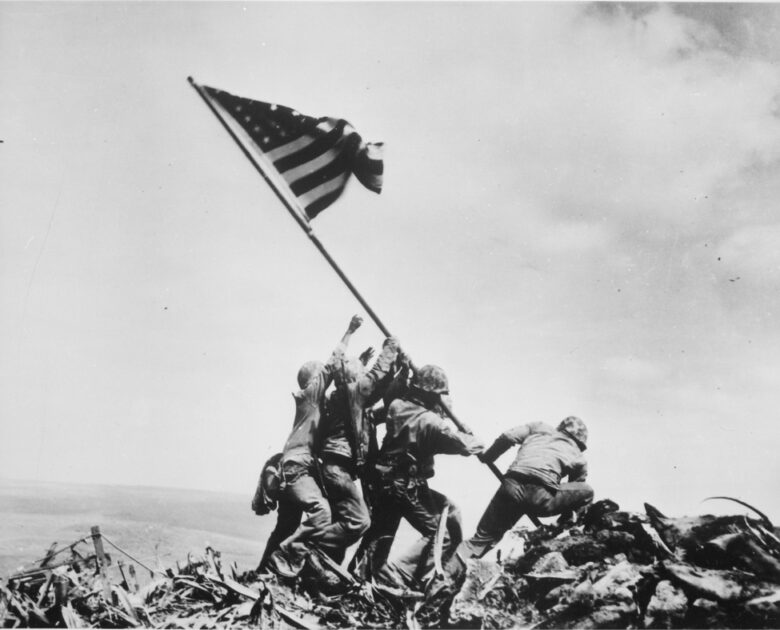 Use this narrative with the D-Day Narrative and the Phil “Bo” Perabo, Letter Home, 1945. Primary Source to showcase American soldiers’ experiences during WWII.

Air power dictated the American decision to assault the Japanese-held island of Iwo Jima early in 1945. The new B-29 bomber, developed at great cost to replace the standard B-17 used for bombing in Europe, possessed immense potential for altering the strategic balance of the war in the Pacific. The B-29 had a longer range and payload than its predecessor and was more heavily armed. It could soar to 30,000 feet to drop bombs, higher than enemy anti-aircraft weapons and fighters could reach – although the bombers would have trouble hitting their targets from that height.

Still, to reach Japan from the American-held Mariana Islands, aircraft had to detour around the Bonin Island chain, which included Iwo Jima, because of Japanese aircraft stationed there. However, capturing Iwo Jima instead of avoiding it would allow the Americans to use its airfields for refueling bombers on the way to Japan and back. It could also become a base for American fighter aircraft that could escort the bombers and allow them to drop bombs from a lower altitude – within range of enemy fighters, but far more accurately. Planners believed heavy and well-targeted bombing of Japan was a necessary prelude to invading the home islands. In the Pacific, the American armed forces used the strategy of “island hopping,” fighting the Japanese on various Pacific Islands and thus closing in on Japan. Sometimes U.S. forces bypassed heavily fortified Japanese positions and concentrated on islands that were not well defended but were capable of supporting the drive to the Japanese mainland. They decided to fight on Iwo Jima.

The Japanese recognized the importance of the tiny volcanic island of Iwo Jima a mere two-and-a-half by five miles in size – and intended to defend it to the utmost of their power. Instead of fighting the Americans on the beaches, however, Japanese troops intended to hold out in deep fortifications built far inland, killing thousands of Americans while their kamikaze suicide bombers inflicted terrible losses on the American fleet. The kamikaze, named after the “divine wind” that had scattered a Mongol fleet invading Japan in 1281, were young Japanese fliers who piloted their explosive-laden planes into American ships. Their introduction in October 1944 had been a mark of desperation by the Japanese, but they also shocked the Americans and were initially effective in sinking numerous vessels.

Three U.S. Marine divisions landed on Iwo Jima on February 19, 1945, and gradually worked their way inland. They faced heavy resistance that an air and naval bombardment failed to subdue because the Japanese were underground in their fortifications. On February 23, the Marines succeeded in capturing the island’s primary landmark, the peak of Mount Suribachi.

Marines planted and raised a flag to mark their capture of the peak, to the delight of American witnesses, but a Japanese grenade attack interrupted them when the enemy heard the Americans cheer for the flag. Joe Rosenthal, a photographer from the Associated Press, then asked the Marines to repeat the ceremony for his camera. Six men – five Marines and one U.S. Navy Corpsman – obliged for a series of photographs that soon became immortal and won Rosenthal a Pulitzer Prize.

The central photograph of the flag raising was reproduced thousands of times in the media for morale and propaganda purposes. For U.S. service members and the public generally, it symbolized the country’s resolve to continue fighting against formidable odds. Few realized it did not capture the actual event of the initial flag raising or all the soldiers engaged in that event. Nor, in fact, did the flag raising mark the end of the fighting for Iwo Jima, which, in fact, had barely begun. However, the symbol was arguably more important for the United States than the reality.

The capture of Mount Suribachi brought possession only of the southern tip of Iwo Jima. The rest of the island had to be captured before its airfields could be used without hindrance. But fighting continued for another month as the Marines advanced foot by foot, usually having to kill the Japanese soldiers within their entrenchments by the use of flamethrowers, satchel charges, and other heavy weapons. By the time the fighting ended on March 24, all but 200 of the Japanese garrison of approximately 20,000 troops had been killed. The Marines suffered terrible casualties as well; 6,000 were killed and about 25,000 wounded.

The Japanese had succeeded in slowing the inexorable American advance toward the home islands. One group, however, had failed to achieve its anticipated impact: the kamikaze. Thanks to Iwo Jima’s distance from Japan, suicide aircraft had been unable to reach the American fleet in significant numbers. But the Japanese took note, and when American forces invaded the island of Okinawa in April 1945, the kamikaze were ready and inflicted serious losses. For the Americans, the lessons of Iwo Jima and Okinawa were clear: invading Japan would entail total devastation on both sides because Japan would put up a suicidal defense of the islands to the last man. This realization played an important role in the later decision to use the atomic bomb at Hiroshima and Nagasaki.

1. American forces launched an assault to capture the island of Iwo Jima in February 1945 because

2. The most significant lesson Americans learned from the Battle of Iwo Jima was that

3. The ultimate success of the Americans during the Battle of Iwo Jima depended on

4. By the time the United States attacked the Japanese on Iwo Jima in early 1945, American military planners

5. The event in the photograph depicted

6. The scene depicted in the photograph influenced the decision to

1. This map most accurately depicts

2. What enabled the strategy depicted in the map?