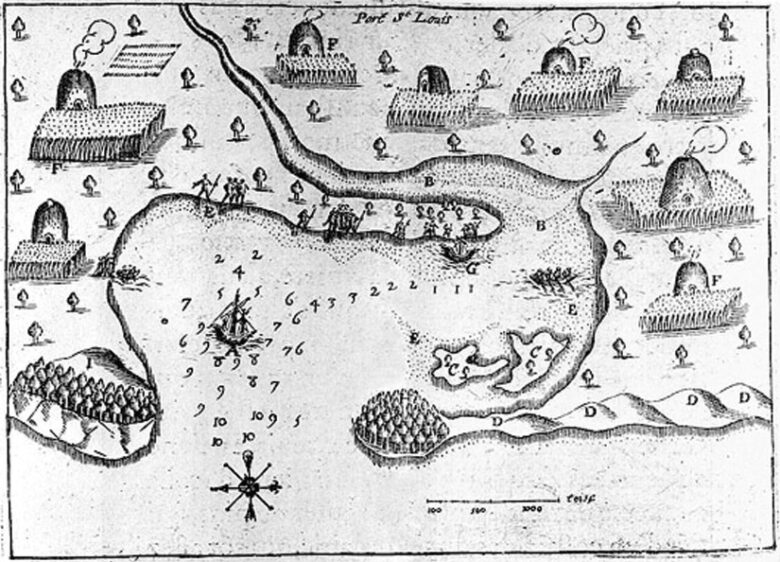 This Decision Point should be assigned at the beginning of Chapter 2. It can be accompanied by The English Come to America, The Founding of Maryland, and the William Penn and the Founding of Pennsylvania Narratives, as well as the A City Upon a Hill: Winthrop’s “Modell of Christian Charity,” 1630 Primary Source to explore the founding and development of regional differences in the colonies.

The Mayflower set sail from the English port of Plymouth on September 6, 1620. A leaky old wine ship, it carried 102 passengers, plus around thirty crewmen and various livestock. The passengers were mostly English members of a dissenting Separatist congregation that had lived in exile in the Dutch city of Leiden, together with their servants. Also traveling on the Mayflower were people the other passengers called “strangers.” These were a mixed group of emigrants recruited by the Merchant Adventurers, a trading company based in London that had invested in the journey as a commercial opportunity.

Separatists were those men and women who believed the Protestant Reformation should have swept all remnants of the old Catholic ritual out of the Church of England. Whereas English Puritans wanted to purify the Church of England from within, Separatists did not believe this was possible and left the church instead. They refused to abide by the teaching of the Church of England (the established or orthodox faith of the land), were persecuted, and fled England for Holland and then New England. Their chronicler and later governor of the Plymouth Colony, William Bradford, described their plight: “Religion has been disgraced, the godly grieved, afflicted, persecuted, and many exiled, while others have lost their lives in prisons and other ways; on the other hand, sin has been countenanced, ignorance, profanity, and atheism have increased, and the papists have been encouraged to hope again.”

The group of Separatists remained in Holland for a decade, suffering persecution and corrupting worldliness. With religious and political tensions rising in Europe, they feared for their security and freedom. Faced with these fears, they saw an alternative in the wilderness of North America. Perhaps there they could find the freedom to pursue their faith and live away from the corrupting influence of the Old World and establish a pure church. They had a choice of whether to remain in the known world and risk continuing persecution or whether to face the dangers of the Atlantic and an unknown continent on which to build a pure church. They chose the path fraught with many difficulties and dangers. They would be pilgrims to the new world.

The ocean crossing was particularly stormy, terrifying everyone on board, especially when a cracked beam threatened to sink the ship. The passengers suffered seasickness and scurvy during the miserable journey and wondered whether they would arrive safely at distant shores. They decided to trust the will of God, and they bravely proceeded. The journey took eight weeks, during which two people died and two babies were born. On November 9, the group sighted Cape Cod, which was several hundred miles north of their intended destination in Virginia.

With North America in sight, this group, later known as the Pilgrims, had to determine the kind of community they were creating. Some passengers were unhappy with the decision to stay in Cape Cod rather than continue to their original destination. The resulting friction led them to draw up an improvised means of preserving order and governing the colony according to just principles—the “Mayflower Compact”:

Having undertaken, for the glory of God and advancements of the Christian faith and honour of our king and country, a voyage to plant the first colony in the northern parts of Virginia, [we] do by these presents . . . covenant and combine ourselves together into a civil body politic; for our better ordering and preservation and furtherance of the ends aforesaid; and by virtue hereof to enact, constitute, and frame such just and equal laws, ordinances, acts, constitutions, and offices, from time to time, as shall be thought most meet and convenient for the general good of the colony, unto which we promise all due submission and obedience.

Those who signed the document bound themselves to a rule of law and cooperation for the common good in facing the dangers ahead. They were now knit together into a government and a civil society. They decided that they would seek the common good through good government rather than merely their own private self-interests.

The first scouts went ashore on November 11 and took maize from American Indians’ grain stores; there is some question whether they stole it or paid for it. They had very few provisions and faced a brutal winter during which their clothes froze on their bodies. When, the following month, Nauset Indians fired arrows at them, the scouts decided to sail across Cape Cod Bay and settle there instead. Meanwhile, their fellow migrants remained on the Mayflower, suffering from cold, malnutrition, and disease. The survival of the colony was very much in doubt.

The survivors did not disembark until March 1621, by which time half the passengers and crew had died. They named their new home Plymouth, after their place of departure, but the American Indians who had lived there had named it Patuxet. Bradford, soon to be governor of the new colony, recorded how the Pilgrims “fell upon their knees and blessed the God of heaven who had brought them over the vast and furious ocean, and delivered them from all the perils and miseries thereof, again to set their feet on the firm and stable earth.”

After disembarking, the Pilgrims were met with more reminders of death: Littering the beach were the bleached bones of American Indians who had had earlier contact with Europeans and been wiped out by diseases to which they had no immunity. Bradford interpreted the death of the local population as part of a divine plan for the Pilgrims to create a commonwealth in North America and spread the gospels to “godless Indians.”

The Pilgrims, the “strangers,” and the crew hauled the ship’s cannon up the hill, where they built a defensive timber fortress within which their settlement of homesteads and storehouses took shape. Massasoit, chief of the Wampanoag confederation, sent an envoy, Squanto, who had survived the epidemic at Patuxet, probably because he had been a slave in London and had acquired some immunity there. Squanto and another American Indian, Samoset, gave the Pilgrims invaluable advice on how to plant maize, and together the English colonists celebrated their first harvest with some ninety Wampanoags in the fall of 1621 to thank God for the bounty and their survival. Colonial Americans continued to hold occasional days of thanksgiving to thank God, and days of prayer and fasting to seek forgiveness. The story of the Pilgrims crossing the Atlantic in the Mayflower to escape religious persecution and live freely and independently in North America is commemorated each November as Thanksgiving Day.

In 1630, the Pilgrims were followed by four hundred nonseparatist Puritans who sought, in the words of Governor John Winthrop, to establish a “city upon a hill” at Massachusetts Bay. That beachhead sparked a massive migration of more than fifteen thousand settlers in the next decade.

3. Which of the following best describes the Pilgrims interactions with American Indians in the first years of their colony?

4. The precedent established in the Mayflower Compact created which of the following foundations for governing?

5. The Pilgrims’ motivation for migrating to North America was

6. William Bradford’s main role in the Plymouth community was

“In the name of God, Amen. We whose names are under-written, the loyal subjects of our dread sovereign Lord, King James, by the grace of God, of Great Britain, France, and Ireland King, Defender of the Faith, etc.

Having undertaken, for the glory of God, and advancement of the Christian faith, and honor of our King and Country, a voyage to plant the first colony in the northern parts of Virginia, do by these presents solemnly and mutually, in the presence of God, and one of another, covenant and combine our selves together into a civil body politic, for our better ordering and preservation and furtherance of the ends aforesaid; and by virtue hereof to enact, constitute, and frame such just and equal laws, ordinances, acts, constitutions and offices, from time to time, as shall be thought most meet and convenient for the general good of the Colony, unto which we promise all due submission and obedience.”

1. What was the purpose of this document?

2. In the excerpt, the term “civil body politic” refers to the idea that