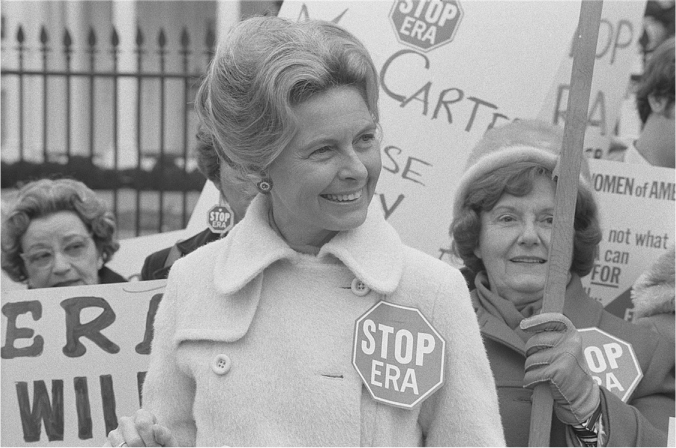 Use this Narrative with The Birth Control Pill Narrative and the National Organization for Women (NOW), Bill of Rights, 1968 Primary Source while discussing the various civil rights movements occurring during the 1970s to specifically target the issues of women at the time.

In 1973, feminist Betty Friedan debated conservative Phyllis Schlafly at Illinois State University in 1973. Friedan, who disliked Schlafly’s opposition to an Equal Rights Amendment (ERA) to the Constitution, said, “I consider you a traitor to your sex.” Schlafly countered by saying that Friedan and her allies were “intemperate, agitating proponents of ERA. . . so intolerant of the views of other people.” Schlafly antagonized liberal and feminist women in the audience with comments like: “I’d like to thank my husband for allowing me to speak here tonight.”

Friedan and Schlafly had much in common: they were both well educated, married with children, and passionate about their respective side in the fight over the ERA. The amendment simply stated: “Equality of rights under the law shall not be denied or abridged by the United States or by any other State on account of sex.” But it was Schlafly whose opposition prevailed in the fight and who strengthened the position of traditional conservatism as a result.

Phyllis Stewart was born in St. Louis and raised during the Great Depression when her mother had to support the family because of her father’s inability to find work. A bright and hardworking student, Stewart graduated from Washington University in St. Louis in 1944, working at a World War II ammunition factory to help defray college costs. She also received an M.A. in government from Radcliffe College, then the sister school of Harvard University. She later received a law degree from Washington University in 1978.

After the war, Stewart worked for a year at the American Enterprise Institute, a conservative pro-business organization in Washington, DC. She left to become involved in a political campaign in St. Louis and eventually ran for Congress herself, and lost, as the Republican candidate in a heavily Democratic district. In 1949, she married Fred Schlafly, an attorney for the Olin Corporation, became active in Republican Party politics, and was a delegate to every GOP convention from 1952 until 2016. She had six children and attended Washington University Law School at night. A strong Roman Catholic and anti-communist, she founded the Cardinal Mindszenty Foundation (named after an imprisoned Hungarian prelate) to educate Americans about the communist threat to religion.

Schlafly gained national attention with the publication of her first book, A Choice, Not an Echo (1964), which attacked the moderate East Coast leaders in the Republican Party and supported the campaign of conservative Arizona senator Barry Goldwater when many party leaders did not. The slim volume of approximately 120 pages was distributed by her own publishing house and sold more than three million copies, catapulting Schlafly to fame within the emerging conservative movement (she used the royalties from the book to fund her children’s college educations). She now had a platform for her views and published a monthly four-page pamphlet known as The Phyllis Schlafly Report, distributing it to thousands of subscribers, many of them women she had cultivated in her role as a member (and later vice president) of the National Federation of Republican Women.

Schlafly’s main interests as a writer and analyst were defense policy and nuclear weapons, and she co-wrote several books about these with former Admiral Chester Ward. She was very critical of Richard Nixon’s policy of détente, the lessening of tensions between the United States and the Soviet Union, as well as of Nixon’s opening relations with Mao Zedong’s China in 1972. She thought the communists could not be trusted to abide by agreements being reached on nuclear weapons and improved relations.

One of the issues that did not interest Schlafly much at all was the feminist movement, which had reemerged during the protest culture of the 1960s. Betty Friedan had helped shape feminism in the 1960s by the publication of her book, The Feminine Mystique (1963), which discussed how the domestic sphere of motherhood, for educated women like herself, was akin to a “cultural concentration camp.” In 1964, Friedan helped form the National Organization for Women (NOW) and fought for equity issues like equal pay for equal work and women’s opportunities to have careers in the professions, such as medicine, higher education, and law. But the cultural revolutions of the 1960s, from civil rights to the anti-Vietnam War protests, reshaped feminist responses and radicalized women, who now saw their concerns linked to political issues in a very personal way.

Even as members of protest movements, women often found themselves treated as second-class citizens, with very few in leadership positions and most serving as secretaries and romantic partners to the male leaders of the movement. Women began to discuss their thoughts about these issues, and the resulting consciousness-raising sessions led to an explosion of feminist organizations in the late 1960s and early 1970s. Cultural and radical feminists bore no hostility toward the economic and political concerns of NOW, but they pushed the movement further, urging control over their own reproductive decisions and their sexuality. They also believed men and women were equally competent and should be treated as equals in the workplace and in their freedom to make personal decisions.

The feminist movement resurrected the ERA (initially proposed in the 1920s) and moved for its adoption. Congress passed it in 1971 and, by early 1973, 30 states had ratified it, leaving it only eight states short of adoption. Moreover, several states had also legalized abortion and, in 1973, the Supreme Court legalized abortion nationwide in a 7-2 vote in the case known as Roe v. Wade. Then Phyllis Schlafly entered the debate, publishing “What’s Wrong with Equal Rights for Women?” in the February 1972 issue of The Phyllis Schlafly Report.

Schlafly’s argument was that women’s rights were already protected under the Constitution and that the ERA would undermine the family, “the basic unit of society, which is ingrained in the laws and customs of our Judeo-Christian civilization”. The modern American woman would lose the protection of father and husband and the “Christian tradition of chivalry,” which supported the family and shielded women in the case of divorce or separation. Schlafly also attacked the ERA as undermining the protections that women already possessed and that the ERA would leave women vulnerable to the military draft. Although she supported equity for women in careers and pay, she also defended motherhood and the home in her essay. She also later claimed the ERA would lead to coed bathrooms and the promotion of homosexual marriage.

Schlafly’s essay led directly to the formation of a movement of Christian evangelicals, Mormons, Catholics, and other traditional groups to fight against the ERA in an organization called STOP ERA (Stop Taking Our Privileges-ERA), led by Schlafly. ERA supporters were often white, middle-class, secular, and well educated; they tended to be single or, if married, in one of the professions. They were also divided among many feminist organizations, such as NOW and others dedicated to securing passage of the amendment. STOP ERA members were married women with children, religious, middle class, and older, and they saw links between attacks on religion in the courts and the feminist movement as threats to motherhood and the home. Democrats and Republicans, including Presidents Gerald Ford and Jimmy Carter, as well as celebrities and the media, supported the ERA, and making headway against it was an uphill climb, but Schlafly’s organization and dedication to the cause prevailed. Schlafly linked the ERA fight to the fight against abortion and drew support from the emergence of a religious right at the grassroots level in the 1970s.

Schlafly took the lead in challenging feminists in debates and in making appearances in the national media, while her grassroots supporters lobbied at the state level, often bringing cookies to appeal to the men who dominated state legislatures. Five states proved crucial battlegrounds: Florida, Missouri, Illinois, Oklahoma, and North Carolina. In each state, the STOP ERA forces prevailed. Even after a five-year extension for ratification was allowed by Congress, Illinois’s decision not to ratify the amendment in 1982 effectively killed the effort for passage. By that time, Ronald Reagan was in the White House and the conservative movement was at its peak, with the majority of STOP ERA members, including Schlafly, giving their full support to the White House and its policies.

After the defeat of the ERA, when Schlafly came under verbal and physical assault from supporters of the amendment, she converted STOP ERA into a pro-family, traditionalist organization named Eagle Forum. As one of the leaders of the rising conservative movement of the 1960s and 1970s, she remained an active Republican and conservative activist for the rest of her life. The STOP ERA fight was one of the main reasons conservatism as an ideology became crucial to Republican politics. The grassroots activists in the STOP ERA fight remained committed to the conservative cause and to traditionalism within American society.

1. Phyllis Schlafly began her grassroots activism in the 1950s with which of the following organizations?

2. In her early political career, Phyllis Schlafly was most interested in which issue, on which she co-wrote many books?

4. The failure of which state to ratify it guaranteed the rejection of the Equal Rights Amendment becoming part of the U.S. Constitution?

5. The origins of the Equal Rights Amendment trace back to the

6. The ideals of the women’s rights movement of the 1960s were similar to those of all the following groups except

“The real liberation of women from the backbreaking drudgery of centuries is the American free enterprise system which stimulated inventive geniuses to pursue their talents. . . . The great heroes of women’s liberation are not the straggly-haired women on television talk shows and picket lines, but Thomas Edison who brought the miracle of electricity to our homes to give light and to run all those labor-saving devices-the equivalent, perhaps, of a half-dozen household servants for every middle-class American woman. . . . Or Henry Ford, who mass-produced the automobile so that it is within the price-range of every American, man or woman. A major occupation of women in other countries is doing their daily shopping for food, which requires carrying their own containers and standing in line at dozens of small shops. They buy only small portions because they can’t carry very much and have no refrigerator or freezer to keep a surplus anyway. Our American free enterprise system has given us the gigantic food and packaging industry and beautiful supermarkets, which provide an endless variety of foods . . . In America, women have the freedom from the slavery of standing in line for daily food. Thus, household duties have been reduced to only a few hours a day . . . “

1. The sentiments expressed in the excerpt best represent the

2. Which of the following events most directly led to the ideas expressed in the excerpt?

3. Which of the following groups would most likely have agreed with the sentiments expressed in the excerpt?