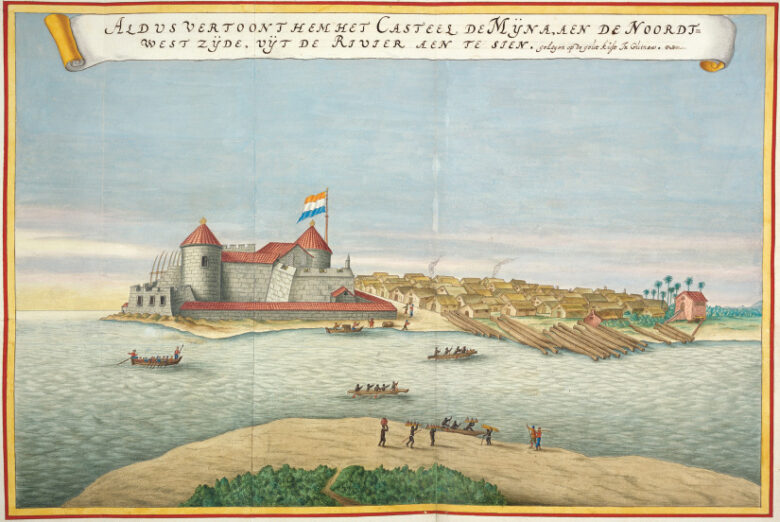 This Narrative can be assigned to students after the Life in the Spanish Colonies Narrative. Connections can be drawn between this Narrative and the Las Casas on the Destruction of the Indies, 1552.

In 1734, British sea captain William Snelgrave stated that Africans had been trafficking in slaves long before the Europeans arrived and explained the various ways Africans could become enslaved in their native country. Slavery could result from crimes committed or unpaid debts; parents could also sell their children into slavery. Yet the most common source of slavery was the taking of war captives by an enemy tribe or state. Snelgrave argued that the slave trade between Europeans and Africans was moral and just and, in fact, benefitted the African slaves. According to him, Europeans had an economic incentive to treat slaves better than their African counterparts because of the expense incurred in their purchase. Furthermore, European slavers would introduce African slaves to Christianity, thus saving their souls for eternity. Many Europeans shared Snelgrave’s opinions, as did the Catholic Church and its popes, who issued several decrees concerning Africa beginning in the mid-fifteenth century and authorizing the enslavement of non-Christians.

Although grossly exaggerating the improved treatment of slaves by Europeans, Snelgrave was right in that the slave trade was just that: a trade. Contrary to popular understanding, Europeans were generally prevented by disease and Africans wielding metal weapons from raiding the African continent and stealing away people they then enslaved. These limitations forced them to deal with Africans as equal business partners. After all, the business of slavery had existed in Africa and been controlled by the African elite since the seventh century. Some historians estimate that, before the arrival of the Europeans in the fifteenth century, Africans had sold upward of eleven million slaves to the Islamic world. When the Portuguese arrived on the coast of Africa, African merchants and rulers were more than happy to exchange enslaved Africans for various commodities. In other words, Europeans simply accessed the preexisting systems of slave trading and provided a new means of transport across the Atlantic to the Americas.

It is important to view slavery and its deep history not as a “white” versus “black” racial issue, but as a longstanding example of “us” versus “them” exploitation. Slavery has existed in various forms since at least ancient times and throughout many world cultures. Before the Industrial Revolution, the invention of advanced labor-saving technology, and the development of markets for free labor, forced or coerced human labor was used by civilizations from Sumeria, Egypt, and Greece to Rome, and eventually African and European nations. Cultures and nations routinely used other cultures and nations deemed different or inferior as sources of slaves. In other words, European and African involvement in a slave trade was just one link in an already long chain of examples.

In Africa, slaves served in a variety of roles. Some worked on the agricultural estates of nobles and kings; some served in domestic roles or as indicators of wealth and prestige; some performed hard labor in gold mines or as soldiers; and others served as artisans, concubines, tutors, and in many other roles. Slaves in Africa were seen as a form of property, and slave markets abounded throughout west and central Africa. The all-too-real danger of becoming enslaved due to violent raids by other Africans prompted many African communities to use the natural geography of cliffs, lakes, mountains, and caves, and the construction of walls around communities, towns, and cities to protect themselves from aggressive neighbors.

The discovery of the Americas and the increased demand for the labor-intensive production of sugar led to an increased European demand for slaves, and Africa provided the perfect solution. Not only was it close to the trade routes going west to the Americas but it had a preexisting system of slavery that facilitated the trade. Business-savvy African merchants and rulers knew they held a product highly valued by Europeans and adjusted their price accordingly. Some demanded cowry shells for their slaves; others requested European goods such as rum, tobacco, guns, iron bars, axes, knives, and textiles. These goods enhanced the prestige of their African owners while also providing a military advantage over their rivals.

A typical slave-trading venture might begin with a European ship captain, before his departure, obtaining from his government the necessary permissions and paying the necessary fees to trade in slaves. He would hire a crew and check the local ports for men returning from Africa to ascertain the current value of slaves and the goods African traders sought. After purchasing supplies and desired trade items, he would set sail for the African coast. For their part, African rulers and merchants would acquire slaves, often through violent raids, and bring them to coastal forts, such as the one shown in, to be held until they were purchased by Europeans.

Having arrived, the European captain would likely offer “gifts” or pay “dues” to the local African traders and kings in exchange for the opportunity to trade with them. The captain would then purchase as many slaves as the African merchants had available and continue this process all along the coastline as he sailed to various vendors until he had purchased his desired number of slaves. A trip could last weeks or even months, depending on the number of enslaved people available at each stop.

During the purchasing process, the crew outfitted the boat for its trans-Atlantic voyage. They installed planks in the storage hold on which to keep the slaves, and nets around the deck to prevent escape or suicide. Enslaved people spent the hellish voyage across the Atlantic Ocean shackled together in the cramped, dark, and foul confines below deck. Approximately 10 to 15 percent of the 12 million Africans in the slave trade – more than one million people – died on the voyage of disease, mistreatment, or suicide.

Known as the “Middle Passage” of the triangular trade between Europe, Africa, and the Americas, the ordeal took one to two months. After arriving in the Americas, the captain would sell his slaves for local goods including cotton, rum, sugar, dyes, and logwood. These goods would then be transported back to Europe for sale. Although European and African slavers saw the slave trade as beneficial and lucrative, the Africans who had been kidnapped and enslaved suffered inhumane exploitation, mistreatment, and denial of the fundamental individual rights to life, liberty, and ownership of their labor and themselves.

Before 1820, four of every five people bound for North or South America arrived in chains. Once purchased and transported from Africa, slaves ended up in a variety of places. A small portion was taken to Europe. Nearly one-third of slaves were sent to Brazil, which received more than four million slaves to work on its numerous sugar plantations, to mine and pan for gold, and eventually to grow coffee. Caribbean islands owned by the British, French, and Dutch likewise received millions of slaves, as did Spanish America, where enslaved people commonly worked in the mines, in artisan trades, and around ports as laborers and sailors. Contrary to popular belief, British North America received only about six percent of the captives transported in the slave trade. Demand was greater in the sugar islands of the Caribbean, whereas North American labor needs were met, in part, by white indentured servants and a naturally reproducing slave population. In the end, however, Africa and Europe worked together to supply the Americas with their primary source of immigrants in the colonial period: African slaves.

1. What was the final destination for most slaves coming to the New World?

2. Before 1820, approximately how many people coming to the Americas were enslaved?

4. The first European country to participate in the slave trade was

5. African rulers and merchants participated in the Atlantic slave trade by

6. Historians looking to study the role of African rulers and merchants in the Atlantic slave trade would likely consult

7. Which statement best describes the interaction between Europeans and Africans in capturing slaves on the African continent?

8. Before European involvement in the Atlantic slave trade, what was the most common form of slavery in Africa?

“The inhabitants of . . . the sugar colonies, are composed of Whites and Blacks, or in other words of British subjects and African slaves. It is from the skill and industry of the former, supported by the painful and indefatigable labour of the latter, that not sugar only, but various other commodities . . . are raised in those countries, and exported to different parts of the world. It is to the cheapness of the labor of these poor people . . . that those costly and extensive works, which are necessary in a sugar plantation, are derived, as well as . . . the affluence of our countrymen in these isles, who are their masters.”

John Campbell, Candid and Impartial Considerations on the Nature of the Sugar Trade; the Comparative Importance of the British and French Islands in the West Indies, 1763

1. According to this source, what was the main motivation for the origins of slavery?

2. Which piece of evidence would best support this source’s argument for the motivations of slavery?