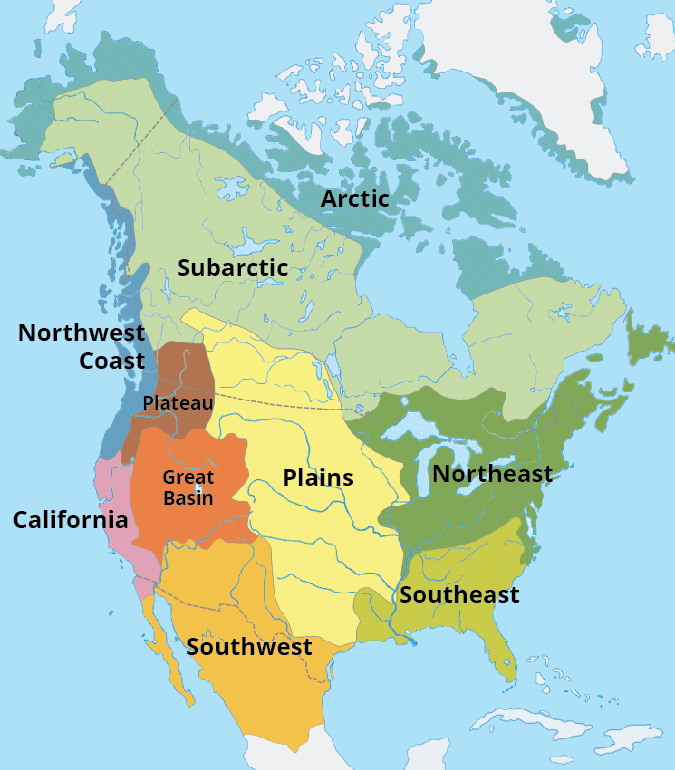 Written by: Andrew H. Fisher, The College of William & Mary

This narrative should be assigned to students at the beginning of their study of chapter 1 and can be used in conjunction with the Question Formulation Technique (QFT): Map of 1491 vs. 1754 Lesson and The Oral Tradition of the Foundation of the Iroquois Confederacy Primary Source.

United States history did not start with Columbus sailing west, John Smith meeting Pocahontas, or Pilgrims celebrating the first Thanksgiving. For at least twelve thousand years before those events took place, North America was home to a diversity of human communities whose living descendants are now called Native Americans or American Indians. Contrary to a persistent but outdated view of history, says historian Colin Calloway, “What Columbus ‘discovered’ was not a ‘new world,’ but another old world, rich in diverse peoples, histories, and cultures.”

By 1492, the area north of Mexico contained between seven million and eighteen million people, divided into hundreds of distinct cultures that had evolved and adapted to the varied environments of North America. Along the Northwest Coast, for example, rich ocean resources and abundant salmon runs enabled Native Americans to develop societies of unique complexity. Without agriculture or domesticated animals, they sustained large, mostly sedentary villages featuring immense plank houses and elaborate artwork. Totem poles were one marker of the social stratification that also distinguished Northwest Coast cultures north of the Columbia River. Hereditary elites controlled access to valuable resources, seized captives from enemy groups and made them slaves, and held potlatches, lavish ceremonial feasts, to reinforce their high place in society by redistributing surplus food and goods to those of lower status.

Northwest Coast Indians also traded with Native Americans to the east, on the Columbia Plateau of present-day Oregon and Washington. This region has a semiarid climate that supported smaller human populations in more egalitarian societies. Tribes such as the Nez Perce, Yakama, and Okanogan followed a seasonal way of life that took them from semipermanent winter villages to fisheries and foraging areas used by many different Indian nations. Salmon was their major source of protein, but the bulk of their calories came from the wild plant foods gathered by women, who shared a roughly equal amount of power and responsibility with men. Women often led work groups and ceremonial gathering expeditions. They also butchered and cleaned the large amounts of game and fish that were exchanged for other goods in the great, intertribal marketplace on the Columbia River.

Trade networks linked the Northwest to California, one of the most densely populated and culturally diverse parts of North America. At the time of first contact with the Spanish in 1542, approximately 300,000 Indians occupied the coastal areas and river valleys west of the Sierras. They spoke as many as one hundred different languages but lived a similar lifestyle based on hunting, fishing, and foraging. California’s extensive oak woodlands were an especially important source of food, furnishing perhaps 600,000 tons of acorns annually to gatherers. Women gathered and ground the acorns into a highly nutritious meal, while men hunted and fished.

The harsh climate and scarce resources of the Great Basin forced the Paiutes, Shoshones, and Utes to move frequently and kept their populations relatively low. At a few locations, such as Pyramid Lake in Nevada, adequate supplies of water and fish did allow sedentary communities to form. Paiutes in the Owens Valley dug irrigation ditches to encourage the growth of edible bulbs. Ute territory in western Colorado and Utah also yielded a greater variety of resources. For most groups, however, survival required seasonal migration to take advantage of changes in the availability of small game, waterfowl, and wild plants. Traveling in small bands or family units, Paiutes and Shoshones stored caches of food and equipment to see them through the winter. Whenever possible, Basin Indians supplemented local products with trade items from beyond the region, including buffalo hides from the Great Plains.

The Native Americans of the Plains had been hunting bison for centuries. Plains tribes did not have horses until the Spanish brought them from Europe; to slaughter buffalo, they used bluffs or cliffs called buffalo jumps to drive herds to stampede over the edge.

The tribes followed the migration of bison and other game animals that filled their bellies, clothed their bodies, sheltered their families, and equipped their toolkits. Buffalo robes also served as a valuable trade item that could be exchanged for corn and other crops. The Pawnee combined horticulture and hunting to support permanent earth-lodge villages along the Platte River (in modern Nebraska). In these semi-agrarian societies, women tended the fields and controlled the produce, which gave them economic and social power.

Maize cultivation, which had spread north from Mexico, also shaped many native cultures of the Southwest. After prolonged droughts undermined the Ancestral Puebloan civilization in the thirteenth century, people migrated east and west to establish the mesa-top Pueblo, Zuni, and Hopi villages that greeted Spanish conquistadors. These societies staged elaborate dances to the spirits known as kachinas that they believed brought rain to their fields. All had uneasy relations with the Apache and Navajo bands that moved into the region during the fifteenth century. Although some Navajos cultivated crops in the canyons of northern Arizona, they and the Apache lived primarily by hunting and gathering, and by raiding their agrarian neighbors. They also began herding sheep and goats, which were introduced by the Spanish.

East of the Mississippi River, epidemics and violence unleashed by Spanish expeditions in the early sixteenth century destabilized the great chiefdoms that had dominated much of the Southeast. The ancestors of the Cherokee, Chickasaw, Choctaw, and Creek gradually abandoned settlements such as Moundville in Alabama and Etowah in Georgia, where they had built huge earthen pyramids surrounded by plazas, palisades, and farms.

By the time English colonists arrived on the eastern seaboard, few large chiefdoms existed. One exception was the Powhatan confederacy, which controlled most of eastern Virginia through conquest and diplomacy. Another was the Five Nations, or Iroquois confederacy, in the Northeast. Formed in the centuries before European contact, this “Great League of Peace” ended rampant warfare and established intertribal cooperation among the Mohawk, Oneida, Ononondaga, Cayuga, and Seneca (and later a sixth tribe, the Tuscorora).These Iroquois nations and other tribes of the Eastern Woodlands lived in matrilineal societies (i.e., they traced their ancestry through the female line). They also accorded considerable power to clan mothers, who decided the fate of captives, chose or removed sachems (chiefs), and participated in councils. Because women grew the corn, beans, and squash that sustained war parties, they could withhold food if they deemed an attack to be against Iroquois interests. By the seventeenth century, though, the Five Nations had waged many wars against Algonquian-speaking enemies such as the Delaware, Huron, and Ojibwe. European imperial powers exploited these rivalries by seeking allies in their own wars of conquest, while the Native Americans, in turn, used the Europeans for their own purposes.

Changes were already underway during the sixteenth century as fishermen and merchants from England, France, and other maritime nations began introducing Indians along the Atlantic Coast to exotic goods and exposing them to terrible diseases. Although North America was an old world in 1607, European colonization would soon make it, as one historian wrote, “a new, and often nightmarish, world for Indian peoples.”

1. The highest population estimate for North America (excluding Mexico) in 1492 is

2. The Native Americans of the Northwest Coast and Columbia Plateau relied upon and revered which of the following food?

3. Before European colonization, which region was among the most densely populated and culturally diverse in North America?

4. After forming their Great League of Peace, the Five Nations of the Iroquois

5. Many Native American cultures differed dramatically from contemporary European societies in terms of

“Sir . . . although they [Indians] are well-made men of commanding stature, they appear extraordinarily timid. The only arms they have are sticks of cane . . . with a sharpened stick at the end, and they are afraid to use these. Often I have sent two or three men ashore to some town to hold converse with them, and the natives came out in great numbers, and as soon as they saw our men arrive, fled without a moment’s delay. . . .

They are so unsuspicious and so generous with what they possess, that no one who had not seen it would believe it . . . in the first isle I discovered, I took by force some of the natives. . . . they are always ready to assert that I come from heaven.”

Christopher Columbus’s letter to back to Iberia, dated June 1493 to Luis de Santangel

1. In this excerpt, Columbus describes the native populations as

2. Columbus’s depiction further prompted him to assert that the Native Americans

Kopper, Philip. The Smithsonian Book of North American Indians Before the Coming of the Europeans. Washington, DC: Smithsonian Institution, 1986. 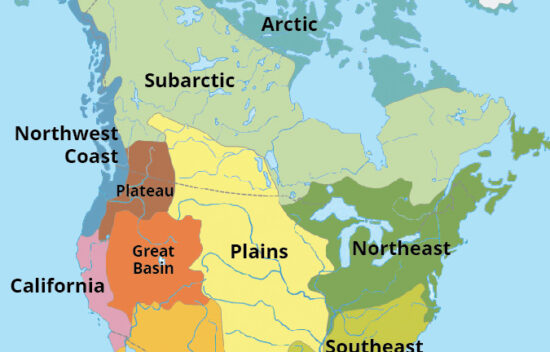 How did natives interact with each other before European contact? 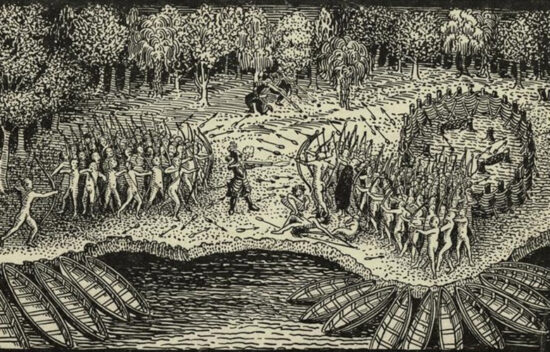