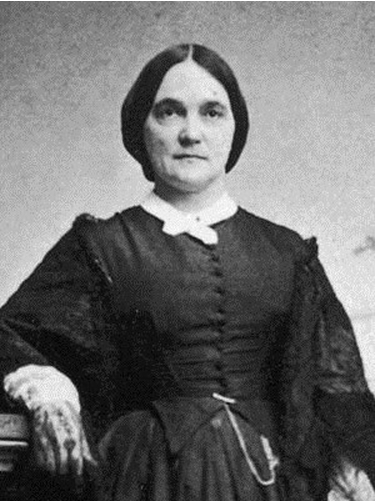 Mary Boykin Chesnut was born Mary Boykin Miller on March 31, 1823, in South Carolina. Her father, Stephen Decatur Miller, was a politician who promoted states’ rights and argued in favor of the position – held by other southerners such as John Calhoun – that slavery was a “positive good.” Miller became governor of South Carolina in 1828 and a U.S. senator in 1830. As the daughter of an elite southerner, Chesnut was educated in Charleston, South Carolina, at Madame Talvande’s French School for Young Ladies. She was a celebrated beauty in Charleston society who traveled widely throughout the United States during the antebellum years, including to the American West and New Orleans.

In April 1840, Mary married the wealthy James Chesnut, Jr., a Princeton graduate, and the two settled at his family home, Mulberry, outside Camden, South Carolina. James was one of South Carolina’s most influential politicians and served as a U.S. senator in the 1850s, during the sectionalism crisis that led to the Civil War. In 1860, Mary Chesnut traveled to Florida to see her sister and was on the return journey when she heard of Abraham Lincoln’s election to the presidency. James Chesnut quickly resigned from the Senate and played an important role in drafting the South Carolina ordinance of secession. He was later part of the negotiating party sent to receive the surrender of Fort Sumter in Charleston Harbor in April 1861, putting the family at the center of the secession crisis.

Mary Chesnut’s wartime diary has become a leading account of the elite white southern woman’s experience during the Civil War era. Noted southern historian Drew Gilpin Faust called Chesnut the “most ambitious among these would-be historian diarists.” While her husband worked for the war effort, Chesnut lived in Richmond, Virginia, during the summer of 1861 before moving back to South Carolina. During the final months of the war, she fled South Carolina and her home because of the invasion of Union General William Tecumseh Sherman’s army, which eventually devastated Columbia, South Carolina, near Camden. The experience of becoming a refugee in North Carolina stripped her of the finery and trappings of gentility she had enjoyed her entire life. While living with a wealthy woman from North Carolina, she found opportunity to both praise and criticize. “Mine hostess is young & handsome, very well educated, talks well, seems so ladylike & kind,” but, Chesnut added, she “lives amidst dirt in a way that would shame the poorest overseer’s wife. A Lady evidently, she is manners & taste! & surroundings worthy a barbarian.”

With hundreds of thousands of white men away serving in the ranks of Confederate armies, southern women frequently experienced the collapse of the institution of slavery firsthand. Chesnut claimed not to have feared her slaves, but the murder of her cousin Betsey Witherspoon by her own slaves caused her and many of her neighbors to reconsider. Chesnut’s assessment of slavery focused on the social evils of the institution for white women, in that it gave white men virtually unfettered sexual access to black women.

The Civil War changed the nature of both leisure pursuits and work for plantation wives. Elite women of the South passed many hours reading during the war, though they often lamented the lack of reading material, partly a phenomenon of the South’s prewar dependence on periodicals from northern states and abroad. Chesnut borrowed Edward Creasy’s Fifteen Decisive Battles of the World from a library in Columbia, South Carolina, in early 1862 and read that historical work with an eye toward understanding the conflict occurring around her in the 1860s.

The war threw many white southern women into the public world of work in new ways. Chesnut deplored the idea of white women working as laborers and secretarial staff in the Confederate government’s burgeoning war machine. She was especially concerned about the freedom this gave younger women to interact with men unsupervised by other and older women.

Between November 1863 and early May 1864, Chesnut was again living in Richmond. She worked briefly at a Richmond hospital as a nurse, but she had to give up the work after fainting regularly because of what she saw. She spent time raising money and procuring medical supplies, only to feel pressure from other women to return to nursing work. When she did, it was only for half a day, feeding injured soldiers at a wayside hospital where patients had only minor injuries. She continued to object to the new social interactions between soldiers and unmarried women working in hospitals, primarily because of the soldiers’ inappropriate flirting and advances. The difficult work of nursing reinforced her feeling of inadequacy and her inability to function in a world without her accustomed privilege and protected femininity. This led her to reassert the superiority of her elite, protected position and disdain the “Florence Nightingale business.”

During the course of the war, Chesnut continued to support the political career of her husband. Historian Douglas Southall Freeman argues that James Chesnut’s various posts in the Confederate Senate, as executive council on military affairs in South Carolina, and as an aide to Jefferson Davis, made him the de facto liaison officer between South Carolina and the Davis administration. At one point, Mary Chesnut lived in a house directly across from the “White House” of the Confederacy in Richmond, becoming a confidant of the First Lady of the Confederacy, Varina Davis.

Ultimately, Mary Chesnut produced seven volumes of wartime records. After the war, she wrote three unpublished novels and revised her diaries of the war years. Eminent southern historian C. Vann Woodward received the Pulitzer Prize for History in 1982 for Mary Chesnut’s Civil War, his edited version of her diary. Chesnut’s reflections on the Civil War are an invaluable resource to study the conflict from the perspective of a wealthy, politically connected Confederate woman.

1. Why would a historian find Mary Chesnut’s life useful in a narrative about the American Civil War?

2. Before the Civil War, Mary Chesnut could be best described as

3. During the Civil War, Mary Chesnut volunteered as a

4. What did Mary Chesnut’s father and husband have in common?

5. While Mary Chesnut lived as a refugee in North Carolina, she wrote in her diary about

“Unlike the South, the North was never reduced to extremities which led the wives of Cabinet officers and commanding generals to gather in Washington hotels and private drawing-rooms, in order to knit heavy socks for soldiers whose feet otherwise would go bare: scenes like these were common in Richmond, . . . Nor were gently nurtured women of the North forced to wear coarse and ill-fitting shoes, such as negro cobblers made, the alternative being to dispense with shoes altogether. Gold might rise in the North to [$]2.80, but there came a time in the South, when a thousand dollars in paper money were needed to buy a kitchen utensil, which before the war could have been bought for less than one dollar in gold. Long before the conflict ended it was a common remark in the South that, ‘in going to market, you take your money in your basket, and bring your purchases home in your pocket.’

In the North the counterpart to these facts were such items as butter at 50 cents a pound and flour at [$]12 a barrel. People in the North actually thrived on high prices. Villages and small towns, as well as large cities, had their ‘bloated bondholders’ in plenty, while farmers everywhere were able to clear their lands of mortgages and put money in the bank besides.”

1. The hardships described were most likely caused by the collapse of the Confederate economy due to the

2. The hardships described in the excerpt were most likely similar to those suffered by

3. On the basis of the experiences of Mary Chesnut, a historian could draw the conclusion that

4. A historian could use the work of Mary Chesnut to support which of the following claims about the effects of war on women?

“Photographs of Women During the Civil War: Selected Images.” Library of Congress. http://www.loc.gov/rr/print/list/107_civw2.html