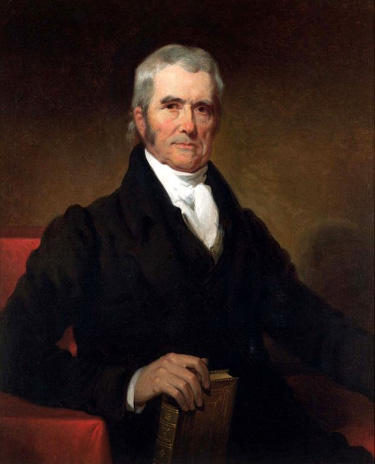 This Decision Point should be assigned at the beginning of the chapter, following the Chapter 5 Introductory Essay: 1800–1828. It can be paired with the Was the Election of 1800 a Revolution? Point-Counterpoint to introduce students to the Age of Jefferson. It can also be paired with the John Marshall’s Landmark Cases DBQ Lesson to expose students to other Supreme Court cases decided by John Marshall.

In the unanimous 1803 Supreme Court decision Marbury v. Madison, Chief Justice John Marshall famously declared: “It is emphatically the province and duty of the judicial department to say what the law is. Those who apply the rule to particular cases, must of necessity expound and interpret that rule. If two laws conflict with each other, the courts must decide on the operation of each.” And although Marbury is best known for clearly establishing the concept of judicial review, it is also a case that was defined at every level by the political battles of the early 1800s between the Federalists, who were fighting to retain political power, and the Jeffersonian Republicans, who were fighting to consolidate it after their electoral victory.

Among the midnight appointments of Mr. Adams’ were commissions to some federal justices of the peace for Alexandria. These were signed and sealed by him, but not delivered. I found them on the table of the department of State, on my entrance into office, and I forbade their delivery. Marbury, named in one of them, applied to the Supreme Court for a Mandamus to the Secretary of State, (Mr. Madison) to deliver the commission intended for him.

When Jefferson entered the presidency and decided not to have the commissions delivered, he did so in the political context of the election of 1800, which saw John Adams and the Federalists lose not only the presidency but also both houses of Congress. After this electoral defeat, Adams had written to John Jay, “In the future Administration of our country, the firmest security We can have against the Effects of visionary Schemes or fluctuating Theories will be in a solid Judiciary.” It was apparent to Adams that after the election, only the judicial branch of government would remain in Federalist hands. But in December 1800, he and the Federalists were dealt another political blow: Oliver Ellsworth, the staunch Federalist then serving as chief justice of the U.S. Supreme Court, resigned. For Adams, it was a matter of first importance to nominate and confirm a successor before the Jeffersonian Republicans took office.

Adams appointed his loyal colleague and secretary of State, John Marshall, who accepted the nomination. Marshall was quickly confirmed by the lame-duck Federalist Congress and was sworn in as chief justice on February 4, 1801. At Adams’s request, Marshall also continued to serve as secretary of State through March 3, 1801, the last day of Adams’s presidential administration.

On February 13, 1801, Congress passed the Circuit Court Act, which established six new circuit courts with sixteen judges, all of whom were to be appointed by Adams and quickly approved by the Federalist Congress before Jefferson and the Republicans took office. It was part of a suite of legislative and executive activity aimed at keeping Federalist control of the federal judiciary. Marbury turned on an act passed on February 27, 1801, authorizing Adams to appoint forty-two justices of the peace for the District of Columbia and Alexandria, Virginia, each to serve for a five-year term. The Senate confirmed all these appointees on March 3, 1801, just one day before the national government changed political hands. The judicial commissions were handled by John Marshall’s office, because he was still serving as secretary of State, but by midnight on March 3, at least four of them had not yet been delivered.

When Jefferson took office, he directed his secretary of State, James Madison, not to deliver the remaining commissions, one of which was for a man named William Marbury. On December 21, 1801, Marbury sued in the U.S. Supreme Court seeking a writ of mandamus to force Secretary of State Madison to deliver the commission. A writ of mandamus means “we command” and is a court ordering someone to do something. James Madison, believing the suit improper, declined to acknowledge it. In fact, he did not secure legal counsel to represent his and the administration’s interests in the case.

Marbury’s lawyer, Charles Lee, who had served as attorney general in the Adams administration, believed a mandamus action was proper. In making this argument, he invoked Section 13 of the Judiciary Act of 1789, which authorized the U.S. Supreme Court to issue writs of mandamus.

The Supreme Court faced a dilemma in deciding Marbury’s case: The justices knew that if the Court were to order Madison to deliver Marbury’s commission, and he disregarded it, the powerlessness of the last Federalist stronghold of the national government, the federal judiciary, would be revealed for the whole nation to see. The Court, therefore, had to devise a legal theory that would allow it to dismiss the claims advanced by Marbury and his legal counsel but at the same time address the injury caused to Marbury by Madison and Jefferson.

Marshall achieved this goal when he delivered his eleven-thousand–word opinion on February 24, 1803, just thirteen days after the case was argued. First, he found that Marbury’s appointment had been completed when his commission was signed and sealed, and because the appointment was for a five-year term, “the appointment was not revocable, but vested in the officer legal rights, which are protected by the laws of this country. To withhold his commission, therefore, is deemed by the court not warranted by law, but violative of a vested legal right.” Marshall found that to repair the injury to Marbury, a writ of mandamus directed to the secretary of State was a proper remedy.

However, at the same time, Marshall also found that Section 13 of the Judiciary Act of 1789, which authorized the Supreme Court to issue a writ of mandamus was not consistent with the Supreme Court’s authority as described in the U.S. Constitution. Issuing the order directing Madison to deliver the commission did not fall within the Court’s appellate jurisdiction. Such an order would also not fit within the Court’s original jurisdiction as a trial court, because the Constitution limits that authority to cases involving high officials of foreign nations and cases to which a state is a party. Marbury’s case did not fit either category.

This posed for Marshall the fundamental question of the case: Was a law duly enacted by Congress, but inconsistent with the Constitution, valid? Marshall concluded that such a law was invalid, and that courts were the proper bodies for deciding whether a law and the Constitution were in conflict. In drafting this part of the opinion, for which Marbury is best known, Marshall mirrored the language and logic of Federalist Paper No. 78, written by Alexander Hamilton in 1788,

The interpretation of the laws is the proper and peculiar province of the courts. A constitution is, in fact, and must be, regarded by the judges, as a fundamental law. It therefore belongs to them to ascertain its meaning as well as the meaning of any particular act proceeding from the legislative body. If there should happen to be an irreconcilable variance between the two, that which has the superior obligation and validity ought of course to be preferred; or in other words, the constitution ought to be preferred to the statute, the intention of the people to the intention of their agents.

Having announced that the federal judiciary had the authority to declare a statute void on constitutional grounds, Marshall, writing on behalf of the full and unanimous Court, found that Section 13 of the Judiciary Act of 1789 was void because it attempted to expand the Supreme Court’s original jurisdiction beyond what was laid out in the Constitution. The Supreme Court could not properly act as a trial court in a suit for mandamus against a public official. As a result, Marbury’s claim had to be dismissed.

Marshall’s opinion had achieved a delicate political balance. It clearly recognized the injury to Marbury but sidestepped a confrontation with President Jefferson, who was likely to refuse to deliver the commission regardless of the Court’s opinion, especially with the Republican Congress working to reconfigure the federal judiciary to minimize the role of Federalist judges and expand opportunities for Republican ones. With no enforcement power of its own, the Court risked appearing powerless. However, Marshall also carved out a powerful and important role for the Supreme Court and the federal judiciary by clearly laying out the power of judicial review, or the Court’s authority to judge the constitutionality of a law.

Watch this BRI Homework Help video on Marbury v. Madison for a summary of Chief Justice Marshall’s decision and the principle of judicial review.

Six days after announcing its opinion in Marbury, again to avoid a political conflict, the Supreme Court upheld the Judiciary Act of 1802 in the case of Stuart v. Laird. It was another fifty-four years before the Supreme Court again invalidated an act of Congress. That instance was the case of Dred Scott v. Sandford.

1. Why were the federal courts a central focus of political battles in the early 1800s?

2. According to the decision in Marbury v. Madison, a law is invalid when it

3. The constitutional principle best exemplified by the issues in the Marbury v. Madison case is

4. The constitutional principle best exemplified by the issues in the Marbury v. Madison case is

5. Which of the following represents the constitutional question at the center of the Marbury v. Madison case?

6. The Marbury v. Madison decision established the precedent of

7. A main result of the decisions rendered during the Marshall Court years was

“[John] Marshall clarified an ambiguous document, injected new content into silent passages, and through judicial statesmanship, shaped a powerful federal system capable of meeting the challenges of a new age. Without his work there would be no ultimate arbiter of central authority, no security in business arrangements, no constitutional safeguards against the power of the state. Using a paper tool, this architect of a modern nation-state . . . strengthened the central government and the property rights of the well-to-do . . . he altered the Supreme Court from an institution of faint respect into an admired panel of last resort.

Many Marshall Court decisions enunciated for the first time the interrelationship between federal and state authority. Translating Hamiltonian doctrines into judicial dicta…”

1. The “ambiguous document” referred to the excerpt is the

2. The “challenges of a new age” mentioned in the excerpt included all the following except