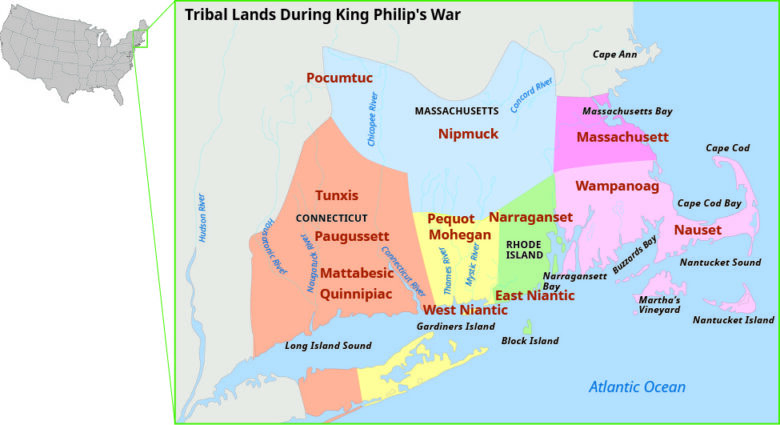 This Decision Point should build on students’ knowledge of tensions between American Indians and English settlers discussed in The Anglo-Powhatan War of 1622 Narrative. After reading this Decision Point, later tensions can also be explored in the Bacon’s Rebellion Narrative.

In what is now Massachusetts, the period between the Pilgrims’ landing in 1620 and the 1661 death of Massasoit, chief of the Wampanoag confederation, was one of mostly peaceful coexistence between the colonists and the local tribes. The American Indians, however, were suffering. Their population had been decimated by European diseases. Moreover, they had lost tribal lands due to legal sales to the colonists and illegal land grabs, which meant they had less area for hunting and agriculture. It was clear to American Indian leaders that English power was increasing while the power of the Indians was declining.

Upon Massasoit’s death, his two sons took control of the Pokanoket tribe within the Wampanoag confederation of Indians. Massasoit’s elder son, Wamsutta (also known as Alexander), died under mysterious circumstances after having been interrogated by Plymouth authorities about rumors that the Pokanokets were amassing muskets and discussing possible warfare. Wamsutta’s brother, Metacom (also known as King Philip), now took control of the Pokanokets. He knew what was coming and had to decide how he would react to the expansion of the English. “I am determined not to live until I have no Country,” he said. An act of violence would be the catalyst for his decision to fight the English.

Tensions increased further in 1674 when the English accused the Pokanokets of killing one of their interpreters, a Christian Indian named John Sassamon. Sassamon had recently decided to live among the English, and his body was discovered in a pond under the winter ice. His death was thought accidental until another Christian Indian, Patuckson, accused three Pokanokets of murdering Sassamon. An English court of twelve jurors and an auxiliary Indian jury found the three Pokanokets guilty of the murder and hanged them. Just one year later, the situation reached a boiling point when Philip’s warriors, probably without his consent, killed some English cattle in the town of Swansea. The English responded by shooting one of the warriors. The war had begun.

Wampanoag warriors were quickly joined by warriors of the Nipmuck and many smaller tribes along the Connecticut River. In the opening months of the war, the Indians were highly successful through a combination of raiding English frontier towns, killing hundreds of settlers, and ambushing the English militia. In fact, one of the worst losses suffered by the English was the ambush at Bloody Brook (in South Deerfield, MA), when Indian warriors killed 76 colonists in a lightning-fast strike. They also attacked several towns, including Brookfield and Springfield. After driving off an attacking Indian army, the English sent one hundred American Indian women and children into slavery.

Meanwhile, the Wampanoag and their allies captured English colonists who, if they survived, might be released in exchange for ransom payments. One such colonist was Mary Rowlandson from Lancaster, who suffered more than two months of captivity. She later chronicled her ordeal in a best-selling book, describing how the band of American Indians who held her was always on the move and hungry. Their forced mobility impeded the Indians’ ability to conduct warfare, but they were not able to grow their crops, because the colonists had located many of their villages and burned them to the ground. The American Indians conducted what now is called guerrilla warfare, but being constantly on the move was wearing them down.

Because the English were losing the war in the opening months, they took a calculated gamble and planned an attack on the powerful Narragansetts. The Narragansetts (living in what is now Rhode Island) were a neutral tribe, but the colonists feared they would soon join King Philip’s warriors and the other hostile tribes. English authorities decided a sneak attack on the Narragansetts was worth the risk, and in December 1675, Massachusetts Bay Colony, Plymouth Colony, Rhode Island, and Connecticut sent one thousand militia to spring an attack on a major Narragansett winter encampment. Between three hundred and six hundred Narragansett warriors and men, women, and children were killed in the assault, as were many of the colonists. The Narragansetts retaliated by raiding several English towns and killing many colonists in the first four months of 1676.

The attacking English had been assisted by Mohegans, illustrating that not all the Indians of New England were aligned with Philip in the uprising. The inability of the tribes to unite against the English was a major reason the tide of the war shifted in the spring of 1676. Friendly Indians acted as guides for the English, helping prevent the English from walking into ambushes. One English militiaman, Captain Benjamin Church, became very adept at learning from his Indian allies, and he had considerable success killing and capturing hostile American Indians.

The battle that broke the back of the Indian war effort occurred at modern-day Turners Falls in May 1676. American Indians had used Peskeompskut, a village on the banks of the river, as a place to rest and resupply before setting out on more raids. They must have believed they were relatively safe because the village was north of any sizable English town, so they posted few guards. However, Captain William Turner marched his troops north from the Hadley, Northampton, area and surrounded the village during the night. At dawn, the soldiers attacked, killing many unsuspecting Indians.

By June 1676, it was clear to the Indians that the English were just too strong in southern New England. Many went north and joined the Abenakis. Others surrendered, only to be either executed or sold into slavery to toil in the sugarcane fields of Bermuda or the Caribbean. King Philip returned to his home grounds at Mount Hope (Bristol, Rhode Island) with a handful of Indians still loyal to him. Perhaps he knew the war was over and wanted to go down fighting in the land he knew best. But his stay at Mount Hope was short. Benjamin Church, using friendly Indians as guides, tracked him down with the help of one of Metacom’s men who betrayed him. Church located Metacom’s camp; a handful of Indians still loyal to Metacom were hiding in the woods alongside their leader. Church positioned his men in a wide circle around the camp, so that if Metacom and his men tried to flee, they would be intercepted by musket fire. Church chronicled in his diary what happened next. When Metacom realized he was discovered, he ran within range of an Englishman and his Indian ally. “They let him come fair within shot,” Church recorded, “and the Englishman’s gun missing fire, he bid the Indian to fire away, and he did so to purpose: sent one musket bullet through his heart, and another not above two inches from it. He fell upon his face in the mud and water, with his gun under him.”

With Metacom dead and the remaining hostile Indians fleeing to northern New England, the war in Massachusetts and Rhode Island sputtered to an end. It was the costliest war in American history in terms of casualties as a percentage of the population. The American Indians were driven out of their villages in southern New England, but the colonists suffered almost as much: More than half the English settlements were attacked during the war, and many colonists were left homeless. The king of England responded by tightening the reins on New England’s freedom, which the colonists later resisted.

Many of the American Indians who survived the war sought their revenge by aligning themselves with the French in Canada. Not long after King Philip’s War ended, the long nightmare of the French and Indian Wars began.

1. In what region of North America was King Philip’s War fought?

2. Which American Indian nation was the primary adversary of British settlers during King Philip’s War?

3. All the following contributed to the start of King Philip’s War in 1674 except

4. All the following military strategies were successful for the Wampanoag confederation during King Philip’s War except

5. Which best explains what happened to King Philip (Metacom) during the war?

6. In the New England region, all the following were direct effects of King Philip’s War except

“The loss to the English in the several colonies is reckoned to amount to 150,000 pounds. . . . There having been about 1,200 houses burned, 8,000 head of cattle killed, and many thousand bushels of wheat and other grain burned . . . and upward of 3,000 Indian men, women and children destroyed, who if well managed would have been very serviceable to the English.”

Edward Randolph, “The Causes and Results of King Philip’s War,” 1675

1. What additional impact of King Philip’s War on New England can be inferred from the excerpt provided?

2. Which of the following best describes a long-term effect of King Philip’s War?