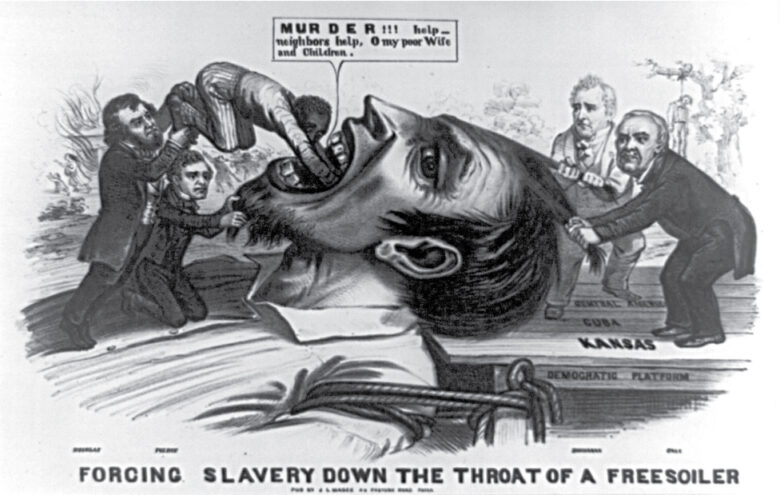 Use this Narrative with The Election of 1860 Narrative and the South Carolina Secession Debate, 1860 Primary Source to allow students to see the consequences of the Kansas-Nebraska Act and growing sectionalism.

In December 1844, after the election of his party’s avowedly expansionist candidate for president, freshman Democratic representative Stephen A. Douglas introduced a bill for organizing the Nebraska Territory whereby he sought protection for commerce with California and New Mexico and for emigration to Oregon by building a transcontinental railroad. If the bill had passed, under the terms of the Missouri Compromise of 1820, slavery would have been prohibited because Nebraska was part of the Louisiana Purchase and the validity of the quarter-century-old legislation would not have been seriously challenged. Nine years later, however, when Douglas, as chair of the Senate Committee on Territories, pushed for another bill organizing Nebraska, the question of slavery could not be sidestepped.

Douglas was recognized nationally for his role in the Compromise of 1850 and promoted as a serious contender for the Democratic presidential nomination in 1852. By the opening of Congress in December 1853, he felt emboldened to organize a stable territorial government over the vast Nebraska area to facilitate the building of a Pacific railroad, thereby fulfilling his vision of an integrated transcontinental United States. On January 4, 1854, he supported a Nebraska bill that had been submitted by an Iowa senator weeks earlier, but now with an important twist: without mentioning the Missouri Compromise or the slavery ban it mandated, the bill empowered the inhabitants of the territory to decide the question of slavery for themselves. This policy, the report claimed, was consistent with the “principles and spirit” of the 1850 Compromise, which had left the decision to the settlers of New Mexico and Utah.

What did this language imply for the Missouri Compromise, which the report acknowledged was a “cardinal article of faith” for both parties? Pressed by southern senators, who chafed that the Mexican Cession had been closed to slaveholders, Douglas secured President Franklin Pierce’s reluctant approval of a new bill that divided the territory into two parts, Nebraska and Kansas. The latter was adjacent to Missouri, where slavery had been permitted under the 1820 Missouri compromise. That Compromise was now explicitly declared “inoperative” and superseded by the principles of the Compromise of 1850, which established territorial self-determination. Although the division of the territory was interpreted as an implicit sanction of slavery in Kansas, the most intense reaction focused on the repeal of the Missouri Compromise.

Although his motives were debated and he was denounced for giving in to southern pressure, Douglas genuinely believed in popular sovereignty, the doctrine that the majority of territorial inhabitants should have the same right as those of a state to decide all domestic matters, including slavery. Claiming to be neutral about the morality of slavery, Douglas argued that American history showed the institution had been continued or abolished by local majorities, not by federal mandates, even in territories where Congress had prohibited it.

Douglas celebrated this diversity and vitality of local self-government. He had been raised in rural Vermont and moved to upstate New York with his widowed mother when he was 17 years old, leaving at age 20 years because the requirements to become a lawyer there were too stringent. In Illinois, the rules and enforcement were very loose; therefore, before his 21st birthday Douglas had opened his own law office and immediately gained political prominence. Diversity among the states had enabled him to rise, and he wanted to extend that diversity to territories, despite the constitutional provision (Article IV) that authorized Congress to make all rules and regulations for federal land.

A persuasive orator and a brilliant debater, Douglas secured overwhelming support for the Kansas-Nebraska Act in the Senate (37 votes to 14) on March 4, 1854, but opposition in the House delayed a vote until May 22, when it passed 113 to 100 with minor changes to which the Senate acceded. President Pierce signed it into law on May 30, more than six months after the original bill had been introduced. For Douglas, the highest moral goal was the preservation of the Union, and to that end, he expected the Kansas-Nebraska Act would serve as a compromise comparable to what he had helped achieve four years earlier. His faith in popular sovereignty as a democratic principle led him to inflate its appeal and underestimate the anger that repeal of the Missouri Compromise would provoke. His vision of popular sovereignty was also predicated on an indifference to slavery and its expansion, because he believed in the superiority of the white race. Moreover, he did not anticipate how problematic implementing self-determination in Kansas would be.

The Kansas-Nebraska Act demonstrates how public policy can have unintended consequences. In the aftermath of the Kansas-Nebraska Act came the transformation of the political party system and a bloody multiyear fight over slavery in Kansas. With sectional ties in the North and South threatening to override party loyalty, Douglas had intended to heal the sectional divisions over slavery that threatened the nation and the national party system. But while northern Democrats in the House split their votes evenly on the Kansas-Nebraska Act, all but two southern Democrats supported it. All northern Whigs opposed it, as did one-third of the southern Whigs in the House and two members of the Senate. The motivation of southern Whigs who joined their northern colleagues against the bill was expressed by Senator John Bell of Kentucky: “The tendency of this bill is to stimulate the formation of a sectional party organization . . . the last and most fatal evil which can befall this country, except the dissolution of the Union.”

In fact, the Kansas-Nebraska Act sounded the death knell for the Whig Party. In the North, “anti-Nebraska” Democrats, Free-Soilers, Whigs, and abolitionists joined the newly formed Republican Party, a wholly sectional organization with no outreach to the South. Abraham Lincoln, out of public office for five years, re-emerged to condemn his long-time Illinois rival Douglas and the Act. Lincoln conceded that states had the right to regulate their own affairs but denied that “slavery, a moral social and political evil,” should exist in a territory over which the federal government had control. He ran unsuccessfully for the Senate from Illinois that fall and afterward supported the fusion of the Whigs with the new Republican Party. For Lincoln and the new party, the threat of disunion was less menacing than the spread of slavery.

The second major consequence of the Kansas-Nebraska Act was bloodletting on the plains of Kansas. Douglas believed that if the settlers there were left to decide the issue on their own, controversy over the legislation would be forgotten. He could not have made a more serious miscalculation. Whereas a flood of migration to California forced congressional deliberations on its statehood, the Nebraska legislation stimulated movement to the organized territories. At the time the act was passed, there were some 800 white settlers in Kansas. By the first census the following March, there were more than 8,000 whites plus nearly 200 enslaved persons. More than half the settlers were from adjacent Missouri and other slave states.

Migration to Kansas quickly became a contest between organized pro- and antislavery groups seeking to establish their respective versions of popular sovereignty. Each supported its own territorial government: The federally appointed governor and locally chosen legislature at Shawnee, later Lecompton, opposed by the antislavery “free-state” government at Topeka. The contest was not confined to balloting. Violence and intimidation occurred before and during elections as each side tried to remove people it considered interlopers whose only intention was to vote, not to settle the land. Which faction had a legitimate majority that would be permitted to decide the future of the territory?

In March 1856, the report from Douglas’s Committee on Territories endorsed the proslavery position, and Douglas prepared a bill for Kansas statehood. Republicans countered with their own free-state bill and a call to investigate election fraud in Kansas. Deliberations in Congress paralleled the eruption in the territory. Within one week in May, three explosive events occurred: Several hundred proslavery men sacked the free-state bastion of Lawrence, burning the elected governor’s home, demolishing newspaper offices and the hotel, and looting homes. The strategy of nonresistance turned the sack into a moral victory for Free Staters. In Washington, Republican Senator Charles Sumner of Massachusetts condemned “the crime against Kansas” in a two-day speech in which he personally attacked Democratic Senator Andrew Butler of South Carolina. Butler’s cousin in the House, Preston Brooks, also a Democrat and from South Carolina, then caned Sumner into a bloody mess at his desk in the legislative chamber and gave him a concussion. Two nights later, abolitionist John Brown and his sons abducted and killed five proslavery settlers at Pottawatomie, Kansas. “Bloody Sumner” and “Bloody Kansas” brought the sectional division clearly into American consciousness.

1. Stephen Douglas wanted to organize the Nebraska Territory to

2. Opposition to the Kansas-Nebraska Act primarily focused on

3. One major consequence of the Kansas-Nebraska Act was that it

4. Proslavery and Free-State forces in Kansas both

5. Stephen Douglass genuinely believed the constitutional republic would best be served by

6. A notable aspect of the creation of the Republican Party was that

7. What needed to be repealed for the Kansas-Nebraska Act to work?

8. Passage of the Kansas-Nebraska Act led to

1. Which of the following motivated the viewpoint in the cartoon?

2. The conditions in the provided image influenced the

3. The image most directly reflected a growing belief that

Sumner, Charles. “The Crime Against Kansas. Speech of Hon. Charles Sumner in the Senate of the United States.” U.S. Senate. https://www.senate.gov/artandhistory/history/resources/pdf/CrimeAgainstKSSpeech.pdf

For the various iterations of the Nebraska bill in the Senate, see Bills and Resolutions, 33rd Congress, Session I, S. #22. https://memory.loc.gov/cgi-bin/query/S?ammem/hlaw:@filreq(@band(@1(Read+twice,+and+committed+to+the+Committee+of+the+Whole+on+the+state+of+the+Union++Ordered+to+be+printed++An+Act+To+organize+the+Territories+of+Nebraska+and+Kansas+)+@field(FLD003+@1(llsb+c33)))+@field(COLLID+llsb))

For the final Kansas-Nebraska Act, see U.S. Statutes at Large, 33rd Congress. Session I, 277 at https://www.loc.gov/law/help/statutes-at-large/33rd-congress/session-1/c33s1ch59.pdf

Holt, Michael F. The Fate of Their Country: Politicians, Slavery Extension, and the Coming of the Civil War. New York: Hill and Wang, 2005.