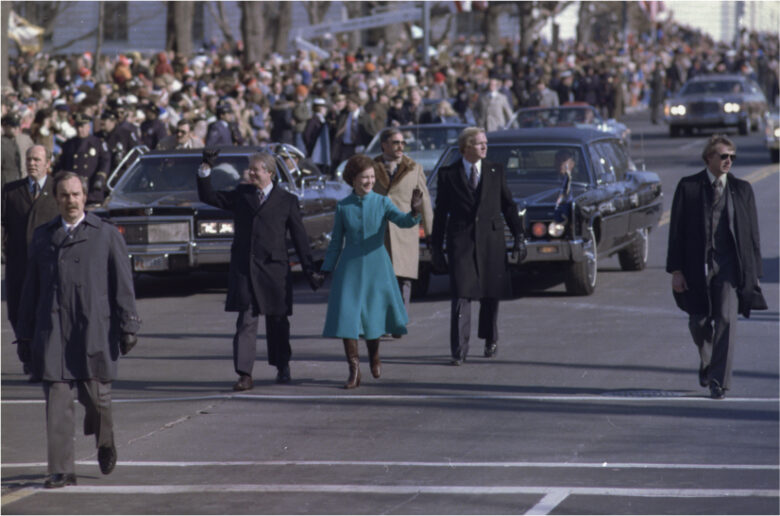 The American economy in the 1970s suffered from high inflation, high unemployment, an energy crisis, a declining dollar, high government spending, and jobs going overseas because of deindustrialization that had been accelerating since World War II. In 1972, Washington Post columnist Joseph Kraft labeled the phenomenon “stagflation.” It would have taken a skillful leader to deal with these problems simultaneously affecting the American economy. However, Richard Nixon was distracted by the Watergate scandal and forced to resign in August 1974; Gerald Ford was a caretaker president who pardoned Nixon of all crimes related to Watergate and thus seemed to ensure his own electoral defeat in 1976. Jimmy Carter, an outsider in Washington, DC, who had served one term as Georgia’s governor before announcing his candidacy for the presidency in 1974, won only a narrow victory and became linked to the stagnant economy, a factor contributing to his defeat by Ronald Reagan in 1980.

Few economists could explain the simultaneous rise of inflation and unemployment. The reigning orthodoxy of British economist John Maynard Keynes was that there should be a tradeoff between inflation and unemployment: when one was up, the other was down. But this idea did not seem to apply in the 1970s as, inexplicably, both indicators rose at the same time, slowing economic growth to 1.3 percent from 1973 and 1982. Stagflation challenged the very notion of Keynesian stimulus, the idea that the government could “prime the pump”of the economy through increased spending, because additional government spending or tax cuts (to encourage private spending) would further fuel inflation, whereas decreased government spending or tax increases would exacerbate stagnation. One group of economists wanted to stimulate economic growth through tax cuts, providing an incentive to investors that they believed would contribute to economic growth. This “supply-side revolution,” driven by tax cuts, was the primary policy behind the Reagan era of the 1980s.

What had caused high inflation in the first place? Years of government spending on the Vietnam War and Great Society domestic programs of Lyndon Johnson, combined with Johnson’s refusal to raise taxes to pay for the costs of government, led to massive inflationary pressures with rapidly increasing prices in the early 1970s. Large increases in government spending and the decision of the Federal Reserve Board to keep interest rates low (from 1969 until 1979) led to the “great inflation” as prices soared throughout the decade. Nixon’s attempt to deal with inflation was to apply wage and price controls on the economy. Dubbed the New Economic Policy, the phased-in controls did nothing to tamp down inflation, and when the initial controls were lifted, inflation skyrocketed.

Added to this was the emergence of global competitors from Japan to the European Common Market (the predecessor of the European Union), which challenged American dominance in manufacturing during the postwar period, especially in steel and automobiles. Nothing hurt more than the emergence of the energy cartel known as OPEC (Organization of the Petroleum Exporting Countries). As western economies became more dependent on imported foreign oil, OPEC showed its power by embargoing oil in retaliation for America’s support of Israel in the Yom Kippur War in 1973, and again during the 1979 Iranian revolution. Each time, oil prices skyrocketed, leading to gasoline lines, shortages, and higher prices for consumers, industry, and transportation. American consumers used to cheap gasoline now saw a gallon of gas triple in price.

Jimmy Carter came to the presidency determined to get a handle on these problems. A detail-oriented manager, Carter was a business executive and not beholden to the traditional spending policies or dominant liberalism of the Democratic Party. A fiscal conservative consumed with controlling government spending, he also believed the administration could control inflation, in part by cutting regulations and, therefore, prices on the airline, trucking, and railroad industry. Thus, he often antagonized special interests and those on Capitol Hill who believed in the continuation of the status quo.

Carter tackled the energy issue first, a costly mistake. Wearing a cardigan sweater, he addressed the nation in February 1977, asking Americans to turn down their thermostats to 65°F at night. He also endorsed having a national 55 mile-per-hour speed limit and conserving energy as much as possible. He called the energy crisis “the moral equivalent of war,” but energy was not a top priority for the electorate, whereas jobs and inflation were. The bill Carter endorsed took more than two years to pass Congress, which haggled over cutting regulations on natural gas production and other difficult issues.

Carter urged cuts in government spending, refusing to endorse a congressional jobs bill that would have triggered government-funded employment if the unemployment rate were greater than 5 percent. He also shook up the Federal Reserve Board in 1978 by appointing Paul Volcker, who was determined to get rid of inflation through interest-rate increases. This would make money expensive to borrow and would thereby slow economic activity and rising prices. Carter backed the policy and did not undercut Volcker’s efforts. The result was interest rates as high as 18 percent on consumer loans by 1980, and this helped push the economy into a recession just as Carter was running for reelection.

Before that election, Carter was worried about polls that showed a crisis of confidence among the American people. Pat Caddell, Carter’s young pollster, had already told him the electorate was losing faith in democracy and the government’s ability to deal with problems. The United States had withdrawn from the Vietnam War and done nothing to prevent the North Vietnamese from uniting the country under communist control in 1975. The resulting Vietnam “malaise” had suggested there was little positive the United States could do in the world anymore. The polling data told Carter that many Americans no longer believed the future was theirs to make.

Carter invited dozens of American politicians and ordinary citizens to the presidential retreat at Camp David to voice their concerns. They not only told him about the problems the nation was facing with energy but, as Carter summed it up, they said, “Mr. President, we are confronted with a moral and spiritual crisis.” Carter took these criticisms to heart, and on July 15, 1979, he addressed the nation from the Oval Office about the crisis of confidence in the nation. Although he never used the term, critics soon dubbed this address the “malaise” speech.

It was as honest and soul-searching a speech as any modern president ever delivered. Carter called the problems facing the nation a “crisis of confidence”:

“It is a crisis that strikes at the very heart and soul of our national will. We can see this crisis in the growing doubt of the meaning of our own lives and in the loss of unity and purpose as a Nation. The erosion of confidence in the future is threatening to destroy the social and political fabric of the nation.”

Carter said the malaise was caused by a profound distress, beginning a generation earlier, at the fact that the government seemed no longer to work for a majority of Americans. Citing Caddell’s polls, Carter said: “A majority of our people believe that the next 5 years will be worse than the past 5 years. Two-thirds of our people do not even vote. The productivity of American workers is actually dropping, and the willingness of Americans to save for the future has fallen below that of every western nation.” Carter called for people to have “faith in each other, faith in our ability to govern ourselves, and faith in the future of this Nation.” He urged Americans to say something good about the country once in a while.

Although his White House staff was leery of the speech and of the honesty with which Carter described the problems facing the nation, polls afterward were very positive. But the next year, interest rates were rising, industries collapsing, and joblessness increasing, all while Carter was in the midst of the 444-day hostage crisis in Iran that strained the last year of his presidency. The words of his earlier speech rang hollow and were easily mocked as the “malaise speech.” As Reagan said, “people who talk about an age of limits are really talking about their own limitations, not America’s.” One scholar who summed up the speech noted that Carter had run in 1976 promising “a government as good as the people” but in the “malaise speech” suggested that the American people themselves were no good.

Few politicians could have survived the tumultuous problems Carter faced in his four years in office. Given an opponent like Ronald Reagan, who was optimistic, touted plans to develop economic growth and confront the Soviet Union, and possessed of a sunny faith in America, Carter was easily defeated.

Reagan led off his campaign with the quip: “A recession is when your neighbor loses his job. A depression is when you lose yours, and a recovery is when Jimmy Carter loses his.” The malaise speech did not cause Carter’s defeat, but politically it did not help him, especially when things grew worse after he delivered it.

1. As a nontraditional Democrat, President Jimmy Carter believed he should

2. A primary economic concern of the American people during the Carter administration was

3. Jimmy Carter’s economic policies included all the following except

4. In interpreting his own pollster’s data, President Carter believed

“In a nation that was proud of hard work, strong families, close-knit communities, and our faith in God, too many of us now tend to worship self-indulgence and consumption. Human identity is no longer defined by what one does, but by what one owns. But we’ve discovered that owning things and consuming things does not satisfy our longing for meaning. We’ve learned that piling up material goods cannot fill the emptiness of lives which have no confidence or purpose.

The symptoms of this crisis of the American spirit are all around us. For the first time in the history of our country a majority of our people believe that the next five years will be worse than the past five years. Two-thirds of our people do not even vote. The productivity of American workers is actually dropping, and the willingness of Americans to save for the future has fallen below that of all other people in the Western world.”

President Jimmy Carter, Energy and the National Goals – A Crisis of Confidence, July 15, 1979

1. Which of the following was a significant impact of the speech excerpted here?

2. Which of the following post-World War II developments contributed most to the situation described by President Carter in the excerpt?

3. Which of the following economic policies did President Carter support as a solution to the problems described in the excerpt?

Jimmy Carter, Address to the Nation on Energy, April 1977. https://millercenter.org/the-presidency/presidential-speeches/april-18-1977-address-nation-energy

Samuelson, Robert J. The Great Inflation and Its Aftermath: The Past and Future of American Affluence. New York: Random House, 2008.