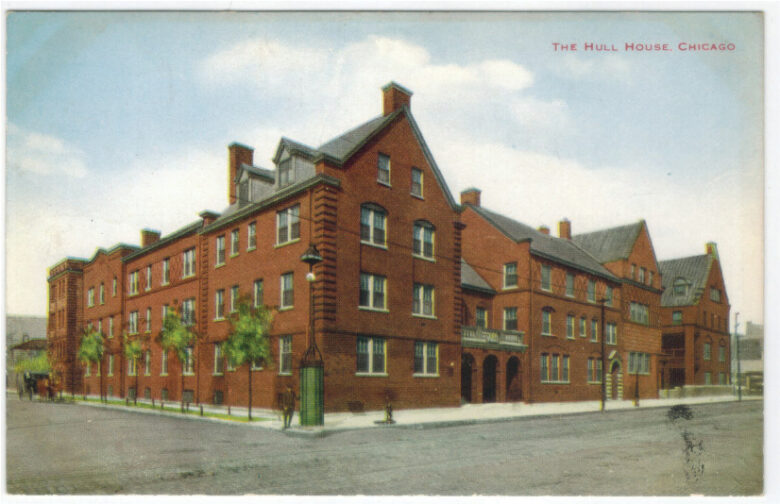 Use this Narrative to give students a greater understanding of the Progressive movement and how Progressives like Jane Addams used their position to help new immigrants.

Jane Addams used the Social Gospel to remedy what she saw as a restoration of American democracy. Coming of age in the decades after the Civil War, she feared democratic equality was threatened by the rise of the urban, industrial society. Uninterested in conventional domestic roles for women, she built a public career as a social reformer and peace activist that marked her as one of the leading public figures of the late nineteenth and early twentieth centuries. Putting her convictions into practice, she worked diligently to improve the lives of working people and immigrants in rapidly expanding American cities by helping establish Hull House, a settlement house for immigrants in Chicago.

At the heart of Addams’s beliefs was a profound commitment to the idea of a cooperative society consistent with social democracy. She felt democracy could not be realized if people from varying backgrounds and social ranks were not treated with respect and allowed to participate in political affairs. Thus, she worked tirelessly to improve the plight of newly arrived immigrants and secure for women the right to vote. In her first book, Democracy and Social Ethics (1902), she outlined plans for a more benevolent society characterized by less competitiveness and inequality. She called for social elites to take a greater interest in the needs of the lower classes, advocated that powerful corporations end their efforts to block legislation aimed at improving the economic lives of workers, and offered support for labor unions intent on ending the practice of child labor.

Addams’s social and economic agenda offered a graphic illustration of the Progressive movement, a reform crusade that permeated the United States in the several decades before World War I. Progressives tended to be middle-class and college-educated citizens concerned about problems created by rapid economic and urban growth. Protestants who believed they could achieve earthly redemption by easing social problems, Progressives were influenced by the doctrine of the Social Gospel that inspired many reformers. They addressed issues such as the spread of political corruption, unfair business practices, the rise of poverty, and intolerance toward immigrants. Immigration was highly controversial at the time because the arrival of large numbers of newcomers, especially from Southern and Eastern Europe, created crowded and unsanitary conditions in numerous city neighborhoods and a voting bloc that was often exploited by political bosses known for their dishonesty. Between 1900 and 1915 alone, more than 15 million immigrants poured into the United States.

Hull House, a run-down mansion Addams rented in a heavily immigrant section of Chicago, became the cornerstone of her reform agenda. Believing personal relationships were the fundamental unit for the realization of a more cooperative society, Addams invited highly educated, middle-class male and female reformers to move into Hull House as residents and to develop meaningful relationships with their immigrant neighbors. Her hope was that such connections would reduce the social divisions so evident in industrial cities and allow reformers like herself and her Hull House co-founder, Ellen Starr Gates, to bring forms of improvement and assistance to the lives of newcomers.

Founded in 1889, Hull House soon became internationally famous as a pioneering venture in social reform and a model of how familiarity might moderate the rampant social divisions of the era. Addams actually got the idea for Hull House from a visit she had made to England to see Toynbee Hall, a benevolent project begun in the East End of London in which college-age men from the city offered classes in topics such as literature and economics to impoverished residents in the hope that the young men would come to know the poor residents better and improve the quality of their lives. The settlement house idea soon attracted the attention of other progressives, and by 1900, more than 100 such institutions existed in the United States.

Addams threw herself into several practical reforms to improve the lives of immigrants at Hull House. She walked streets newly populated by Greeks, Italians, Jews, Poles, and others as she sought to discover as much about them as possible to help them adapt to their new world. On Saturday nights, reformers would invite entire families to their homes for food, conversation, and even dancing. Classes in art and music were provided, as well as child-care and a kindergarten. If the need arose, Addams and her colleagues served as midwives and offered a haven for women confronting domestic abuse.

Addams always encouraged immigrants to celebrate their own national holidays and preserve many of their customs. True to her democratic heritage, however, she also told them the story of Abraham Lincoln and the Civil War. In her autobiographical book, Twenty Years at Hull House with Autobiographical Notes (1910), she recalled not only listening to stories immigrants told her about their lives in foreign lands but also conveying to them the tale of the sixteenth president’s defense of the ideal of human equality. She explained how common people from small towns like the one in which she was raised in Illinois left for war to ensure that a government of the people and by the people would not perish from the face of the earth. Addams was devoted not only to the cause of social equality but also to the idea of Americanization and the hope that individuals from diverse backgrounds could learn to share basic values. Immigrants attended classes and lectures that taught civics lessons in democracy. These programs were designed to make the immigrants good citizens.

Seeing families struggle daily eventually pushed reformers like Addams to pursue political causes as well as fellowship and assimilation. Florence Kelley, a progressive who moved to Hull House in 1892, and Addams began to support efforts to improve working conditions for women and children. In 1893, they joined other reform groups in the Chicago area to force the Illinois legislature to pass laws ending the employment of children under 14 years of age and limiting women’s work to eight hours per day. They also challenged local politicians to remove the flow of raw sewage into Chicago’s streets.

In 1906, Addams helped defeat a provision in a federal bill aimed at barring newcomers who could not read or write in their native language. The intent of this legislation was to curtail the flow of newcomers from Eastern and Southern Europe whose impoverished circumstances had denied them opportunities for a basic education. Addams opposed this stipulation because she knew many people from these regions and realized their lack of formal training was not a good indicator of their true ability or character. The Naturalization Act of 1906 ultimately did bar Japanese laborers, but literacy restrictions were removed from the final version. Eventually, however, zealous nativists, mobilized in organizations like the Immigration Restriction League, forced a 1917 bill through Congress requiring immigrants who sought naturalization to be able to read and write in any language.

During the postwar Red Scare in 1919, feeling their civil rights had been violated, Addams helped raise bail for Russian immigrants arrested for their Socialist beliefs. Although she never became as involved with the struggles of African Americans as she did with her white immigrant neighbors, she spoke out against lynching and was outraged by the outbreak of a race riot in her native state in 1908. The following year, she became a founding member of the NAACP. Inevitably, female suffrage attracted her fervent support as well. Progressives like Addams felt strongly that securing the vote for women would raise the moral tenor of a society plagued by corruption and intolerance. The ratification of the Nineteenth Amendment to the Constitution in 1920 was one of the most significant achievements of the progressive era.

Jane Addams viewed World War I as a threat to her vision of a cooperative and humane world. During the war, she supported the pacifist movement. In 1915, as the United States was considering entering the war in Europe, she helped form the Women’s Peace Party. She even met with President Woodrow Wilson before he led the nation into war and urged him to consider a plan of mediation to settle the bloody dispute in Europe.

Addams represented reformers during the Gilded Age and Progressive Era who were concerned about the problems of modern industrial society. Hull House attempted to help immigrants adapt to American society and “Americanize” them. Many of the social democratic reforms Addams advocated were implemented at the state and national levels during the Progressive Era and New Deal.

2. Jane Addams’s Hull House was a social experiment designed to

3. Jane Addams supported a number of political agendas, which included

4. Jane Addams’s personal philosophy was based on the

5. In the late nineteenth and early twentieth centuries, Jane Addams was considered the embodiment of

6. In the early twentieth century, Jane Addams’s reputation as “the most dangerous woman in America” among her political opponents was due to her strong belief in

“It is not difficult to see that although America is pledged to the democratic ideal, the view of democracy has been partial, and that its best achievement thus far has been pushed along the line of the franchise. Democracy has made little attempt to assert itself in social affairs. We have refused to move beyond the position of its eighteenth-century leaders, who believed that political equality alone would secure all good to all men. We conscientiously followed the gift of the ballot hard upon the gift of freedom to the negro, but we are quite unmoved by the fact that he lives among us in a practical social ostracism. We hasten to give the franchise to the immigrant from a sense of justice, from a tradition that he ought to have it, while we dub him with epithets deriding his past life or present occupation, and feel no duty to invite him to our houses. We are forced to acknowledge that it is only in our local and national politics that we try very hard for the ideal so dear to those who were enthusiasts when the century was young. We have almost given it up as our ideal in social intercourse.”

1. In the statement, Jane Addams is advocating an idea that would support

2. Which of the following groups would most likely oppose the sentiments expressed in the excerpt?

3. In addition to an increase in immigration from Europe, what factor led to the events described in the excerpt?