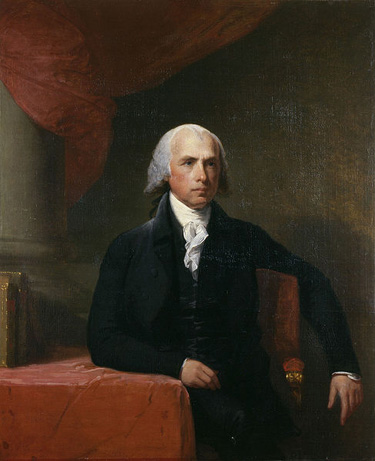 This Narrative should be assigned to students at the beginning of their study of Chapter 4. This reading can be used in conjunction with the Actions of the First Congress Lesson or following the Lesson to reinforce main ideas.

In early 1787, when Virginia Congressman James Madison was preparing for the Constitutional Convention, he wrote an essay entitled “Vices of the Political System,” detailing the flaws of the Articles of Confederation. One of the main problems with the Articles, in Madison’s view, was that tyrannical majorities in the states passed unjust laws violating the rights of numerical minorities. He had seen the oppression of religious dissenters in Virginia and became the leading advocate for the Virginia Statute for Religious Freedom. But injustice was occurring in all the states. As a result, Madison drafted the Virginia Plan, which greatly strengthened the power of the central government and laid the groundwork for the debates at the Constitutional Convention.

At the Constitutional Convention, Madison advocated for constitutional principles of separation of powers, checks and balances, bicameralism, and federalism, which would limit government and protect individual liberties. However, he lost one central feature of his plan of government – a national veto over state laws, meant to prevent majority tyranny in the states.

On September 12, 1787, during the last days of the Constitutional Convention, fellow Virginia delegate George Mason rose and proposed a bill of rights, a list of rights belonging to the people that government could not violate. The delegates were wrapping up their business and worried that a prolonged debate on a bill of rights could endanger the success of their project. Roger Sherman of Connecticut also reassured the convention that the states had their own bills of rights and so had no need for a national bill of rights. The convention unanimously rejected Mason’s idea.

When the Constitution was sent to the state conventions for ratification, the Anti-Federalists who were opposed to it agreed on the need for a bill of rights to protect the liberties of the people. Several Federalists, or those who supported the new Constitution, disagreed. On October 6, Pennsylvanian James Wilson delivered a speech at the state house in which he argued that a bill of rights was unnecessary because the new national government had limited, enumerated (i.e., specified) powers and had no power to violate liberties in the first place. In Federalist Paper No. 84, Alexander Hamilton warned that a bill of rights could even be dangerous, because defining certain rights vaguely would leave them subject to misinterpretation or violation, where previously no such power had existed. Moreover, some important rights would be left out and therefore endangered. Most importantly, Hamilton argued that “the constitution is itself, in every rational sense, and to every useful purpose, A BILL OF RIGHTS” because of the principle of limited government.

During the ratification debate, Federalists in many states had to make compromises. Although they were able to prevent the addition of “conditional amendments” prior to ratification, they had to promise to pass a bill of rights after the Constitution had been ratified. Madison opposed even this and thought “the amendments are a blemish.”

Madison conducted an extensive correspondence over several months with his friend Thomas Jefferson, who was in Paris at the time. Jefferson lamented the absence of a bill of rights in the Constitution and asserted, “A bill of rights is what the people are entitled to against every government on earth.” Madison waffled on the issue. He did not believe the “omission a material defect.” In a republican form of government rooted upon popular sovereignty, the majority could act tyrannically by violating the rights of the minority. Among his several reasons for opposing a bill of rights was that such documents were often just “parchment barriers” that overbearing majorities violated in the states regardless of whether the written protections for minority rights existed. As he wrote in Federalist Paper No. 10, Madison also believed that a large republic would have many contending factions that would prevent a majority from violating the rights of minorities. Nevertheless, he began to change his mind.

Madison was deeply concerned about the continuing strength of the Anti-Federalists after ratification. Anti-Federalists were still calling for structural changes and a second constitutional convention to limit the powers of the national government and deny it power over taxation and the regulation of commerce. Madison feared this would lead to chaos and fought against it. He also sought greater consensus and harmony around constitutional principles by reaching out to the opponents of the new government. He ran in a hard-fought campaign against James Monroe for a seat in the House of Representatives and made a campaign promise to support a bill of rights, particularly an amendment protecting the liberty of conscience. Finally, Madison wrote President George Washington’s Inaugural Address, which indicated support for a bill of rights to be acted upon in the First Congress.

Representative Madison became the champion for a bill of rights in the First Congress, but the idea met a hostile reception. Most representatives and senators thought Congress had more important work to do setting up the new government or passing tax bills for revenue. Many thought the bill of rights was a “tub to the whale” or a distraction, like the empty tub sailors would use to draw away a whale’s attention. Madison was undeterred and dedicated himself to the cause of protecting the people’s liberties.

On June 8, 1789, dressed in black as always, Madison rose on the floor of the House to deliver a speech in favor of a bill of rights. His arguments were founded on the goal of a harmonious political order and the ideals of justice. A bill of rights would extinguish the apprehensions of Anti-Federalists and convince them of the “principles of amity and moderation” held by the other side, now prepared to fulfill a sacred promise made during the ratification debate. Rhode Island and North Carolina, which had withheld their ratification of the Constitution until a bill of rights was added, would also be welcomed into the union. Most importantly, the Bill of Rights would “expressly declare the great rights of mankind secured under this constitution.”

Madison then skillfully guided the amendments through the Congress. He and his committee reconciled all the amendments proposed by the state ratifying conventions and discarded any that would alter the structure of the Constitution or the new government. Limiting himself to those protecting essential liberties, Madison developed a list of nineteen amendments and a preamble. He wanted them to be woven into the text of the Constitution, not simply affixed to the end of the document as amendments, and he sought a key amendment to protect from violation by state governments religious freedom, a free press, and trial by jury. He lost both these provisions but prudentially and moderately continued to support the Bill of Rights he had proposed.

On August 24, the House sent seventeen amendments to the Senate after approving them by more than the required two-thirds margin. By September 14, two-thirds of the Senate had approved twelve amendments, removing the limitations on state governments. President Washington sent the amendments to the states, endorsing them even though the president did not have a formal role in their adoption.

1. Which delegate to the Constitutional Convention first proposed a bill of rights?

2. One of James Madison’s constitutional principles was rejected. This principle would have given

3. After the submission of the Constitution to the states for ratification, James Madison’s greatest concern grew from

4. Which individual helped changed James Madison’s opposition to a bill of rights?

5. Alexander Hamilton’s major argument against a bill of rights was that

6. One major reason James Madison initially believed a bill of rights was unnecessary was that

7. Which of the following was not a reason that the delegates at the Constitutional Convention omitted adding a bill of rights to the original document?

“IN THE course of the foregoing review of the Constitution, I have taken notice of, and endeavored to answer most of the objections which have appeared against it. There, however, remain a few which either did not fall naturally under any particular head or were forgotten in their proper places. . . .

The most considerable of the remaining objections is that the plan of the convention contains no bill of rights. Among other answers given to this, it has been upon different occasions remarked that the constitutions of several of the States are in a similar predicament. I add that New York is of the number. And yet the opposers of the new system, in this State, who profess an unlimited admiration for its constitution, are among the most intemperate partisans of a bill of rights. To justify their zeal in this matter, they allege two things: one is that, though the constitution of New York has no bill of rights prefixed to it, yet it contains, in the body of it, various provisions in favor of particular privileges and rights, which, in substance amount to the same thing; the other is, that the Constitution adopts, in their full extent, the common and statute law of Great Britain, by which many other rights, not expressed in it, are equally secured.

To the first I answer, that the Constitution proposed by the convention contains, as well as the constitution of this State, a number of such provisions.”

1. The argument made by Publius in the excerpt

2. Supporters of adding a bill of rights to the Constitution were most likely influenced by

3. The concepts expressed in the Bill of Rights have most in common with the ideas of

DeRose, Chris. Founding Rivals: Madison vs. Monroe: The Bill of Rights and the Election That Saved a Nation. Washington, DC: Regnery, 2011.

Goldwin, Robert A. From Parchment to Power: How James Madison Used the Bill of Rights to Save the Constitution. Washington, DC: AEI Press, 1997.

Labunski, Richard. James Madison and the Struggle for the Bill of Rights. Oxford: Oxford University Press, 2006.