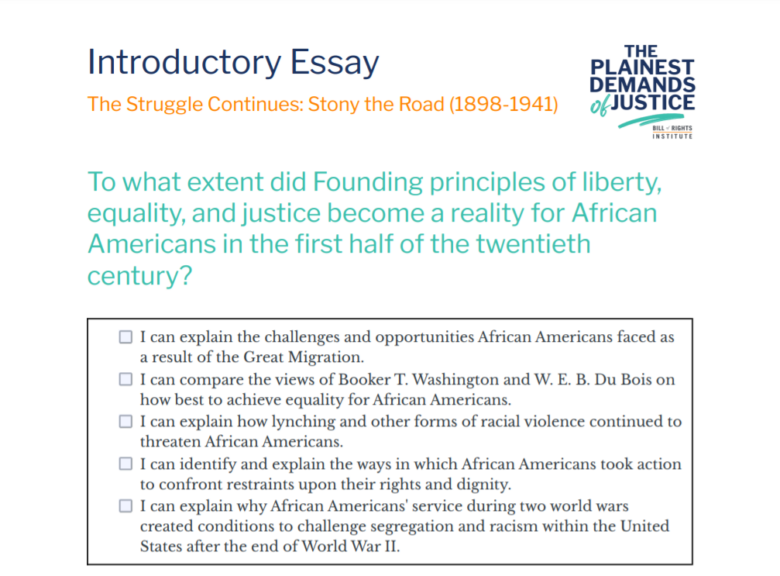 To what extent did Founding principles of liberty, equality, and justice become a reality for African Americans in the first half of the twentieth century?

The first half of the twentieth century witnessed significant change for all Americans as the United States entered an increasingly industrialized and urban age. Blacks specifically seized opportunities for social mobility, industrial jobs, higher education, military service, artistic achievement, and activism in the new society. The signs of hope and progress they saw were mitigated by the ever-present cloud of segregation and discrimination.

Still, many Black Americans participated in the new opportunities afforded by a changing nation. Millions left southern farms and sought jobs and social mobility by moving to southern cities, northern cities, and the West during the Great Migration. Those who left the perpetual indebtedness of sharecropping, in which they had rented land from white landowners in exchange for a portion of the crop, sometimes moved West to farm. But more often they migrated to cities, where they found limited employment opportunities in low-paying service sector work, such as jobs for janitors or maids. They also faced housing discrimination and were forced to reside in segregated Black neighborhoods. However, Black churches and civic organizations were often a foundation of mutual support and strength, and many Black Americans improved their lives.

The number of Black schools and colleges grew quickly after the Civil War. Black education achieved an impressive record of increasing Black literacy from around 20 percent in 1870 to almost 80 percent in 1920. These gains were realized despite southern state governments cuts to the already meager funding and white supremacists watching Black schools to ensure they did not promote Black equality.

Black Americans organized into groups to fight for equality and justice, laying the foundation of the Civil Rights. The National Association for the Advancement of Colored People (NAACP) was the most prominent organization that led the struggle for Black civil rights after its founding in 1909. Its mission included contesting racial prejudice and segregation with striving for civil rights and educational opportunities. W. E. B. Du Bois, Ida B. Wells, and Mary Church Terrell helped establish the NAACP. Du Bois served as the editor of its publication, The Crisis, and brought the struggles of Black Americans to light.

A new generation of Black intellectuals conducted a continuing and vibrant debate over the place of a Black person in the United States and the best path to racial equality. The most prominent debaters were Booker T. Washington and W. E. B. Du Bois.

Booker T. Washington graduated from Hampton Institute (today known as Hampton University) and was the first head of the Tuskegee Institute in Alabama, one of many Black colleges formed in the period. In his famous “Atlanta Exposition Address” (1895), Washington advocated vocational education, hard work, and moral virtues for Blacks as a means of proving themselves to whites and advancing socially and economically.

W. E. B. Du Bois was a critic of Washington’s stance, which he thought too accommodationist, or too willing to compromise with whites. Du Bois was Harvard educated, and in his most famous work, The Souls of Black Folk (1903), he maintained that Blacks should pursue a liberal arts education and fight for full political and civic equality. He argued that a “Talented Tenth” would provide the leadership and vision in achieving progress in racial equality. Although these Black intellectuals held radically different visions, they concurred on the goal of achieving greater Black equality.

Another figure of the time, Marcus Garvey, presented an alternate view supporting racial separation rather than integration. Garvey was an immigrant from Jamaica who founded the Universal Negro Improvement Association (UNIA). He supported Black separatism and a pan-African movement advocating migration back to Africa. He employed more militant rhetoric and advocated armed self-defense.

Black artists, writers, and musicians expressed themselves creatively in different media to convey their Black pride and celebrate African and African American history. The most famous movement of Black culture in the first half of the twentieth century was the Harlem Renaissance. This was a flourishing of Black art among a remarkable concentration of artists in the Harlem neighborhood of New York City in the 1920s and that also included Black artists and culture around the nation and world. In 1925, Alain Locke helped launch the movement with the anthology “The New Negro,” which advanced Black self-expression and art. The rich array of artists included writer Zora Neale Hurston, poet Langston Hughes, and musicians Josephine Baker, Louis Armstong, and Duke Ellington. These artists and many others left an indelible mark not only upon Black culture but on American culture more generally.

A number of violent racial incidents marred race relations throughout this period. Black Americans were the victims of lynchings, and Congress did not pass an antilynching bill despite repeated calls for one. The Great Migration to urban cities fueled racial tensions and led to a number of race riots during and immediately after World War I in several cities across the country. In the infamous Tulsa Massacre of 1921, armed white mobs burned down several square blocks of Black neighborhoods, including a wealthier part of town called “Black Wall Street,” where successful, enterprising Blacks lived and worked. The white mobs fired their weapons at Blacks, killing dozens.

The racial violence after World War I was replicated during World War II, most notably in Detroit in 1943 as tensions over segregated neighborhoods stirred crowds of whites and Blacks to violence. Hundreds were injured, and President Roosevelt sent the army to quell the violence.

The wider political reform movements of the first half of the twentieth century did not offer Black Americans significant relief. Southern progressivism supported segregation as a means of achieving greater social order. Many labor unions excluded Black workers and thus forced them to rely upon mutual-aid societies. Moreover, the popularity of Social Darwinism, even among scientists and intellectuals, meant that belief in a racial hierarchy became widespread, relegating those of darker skin to the bottom. The federal government generally followed discriminatory hiring practices, most notably during the Wilson administration. Blacks also often received less government assistance. For example, during the New Deal, President Franklin Roosevelt’s response to the Great Depression, the administration deferred to racist local and state governments on the distribution of aid. Still, Blacks welcomed the federal relief they received during those difficult times, and many switched from the Republican Party, often called the party of Lincoln, to the Democratic Party.

Local and state governments also continued to suppress Black voter registration, especially in the South. The court deferred to the states to set voting qualifications in Giles v. Harris (1903), though in Nixon v. Herndon (1927) it did ban discrimination when it was egregiously and overtly aimed at restricting the Black vote in primaries. The court affirmed the Nixon ruling in Smith v. Allwright (1944), by banning the attempt in Texas to exclude Blacks by allowing primaries to be regulated by private associations like political parties that could discriminate.

Black men and women played a vital role in the war effort during both world wars. Pictured are a group of the Tuskegee Airmen at a U.S. base in February 1944 and women working at a welding plant on the home front in 1943.

Even though they did not enjoy the full rights of citizenship at home, Blacks served in the fight against autocracy during two world wars—350,000 soldiers in World War I and 1.2 million in World War II. Black soldiers in the armed forces mostly served in segregated units that were typically assigned menial support labor. However, many fought courageously, such as the Harlem Hellfighters in the 369th Regiment of the 93rd Division at the Meuse-Argonne offensive in 1918, and the bomber and fighter squadrons flown by the highly decorated Tuskegee Airmen. Other significant contributions to the war included the Redball Express, which brought desperately needed supplies and troops to Europe during the Battle of the Bulge. Black members of the armed services resisted racist acts in the armed forces during World War II. After fighting fascism abroad, they were more likely to make a stand against segregation and racism at home after the war.

By World War II, Black leaders such as A. Philip Randolph were directly confronting the Roosevelt administration and the larger society to protest discrimination in the armed services and defense industries. When Randolph threatened a 100,000-person march on Washington, Roosevelt signed Executive Order 8802, banning discrimination in hiring for federal agencies and contractors, and established the Fair Employment Practice Committee (FEPC) to enforce the order. This success was a landmark in Black direct action in the struggle for freedom and equality.

The first half of the twentieth century was a period of segregation and second-class status for Black Americans. However, they took action to defy the restraints upon their rights and personal dignity. They formulated and debated paths to equality, expressed their creativity in dynamic and powerful ways, fought for a country that denied them equal opportunity, cooperated for mutual support, and took direct action to confront oppression and injustice. These generations of Black intellectuals, artists, soldiers, and activists demonstrated the moral courage that laid the foundation of the civil rights movement.