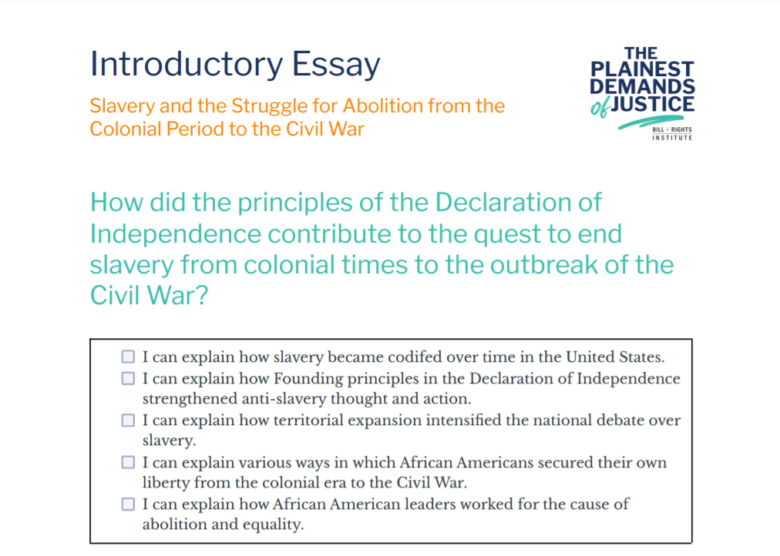 The English established their first permanent settler colony in a place they called Jamestown, Virginia, in 1607. Early seventeenth-century Virginia was abundant in land and scarce in laborers. Initially, the labor need was met mostly by propertyless English men and women who came to the new world as indentured servants hoping to become landowners themselves after their term of service ended. Such servitude was generally the status, too, of Africans in early British America, the first of whom were brought to Virginia by a Dutch vessel in 1619. But within a few decades, indentured servitude in the colonies gave way to lifelong, hereditary slavery, imposed exclusively on black Africans.

Because forced labor (whether indentured servitude or slavery) was a longstanding and common condition, the injustice of slavery troubled relatively few settlers during the colonial period. Southern colonies in particular codified slavery into law. Slavery became hereditary, with men, women, and children bought and sold as property, a condition known as chattel slavery. Opposition to slavery was mainly concentrated among Quakers, who believed in the equality of all men and women and therefore opposed slavery on moral grounds. Quaker opposition to slavery was seen as early as 1688, when a group of Quakers submitted a formal protest against the institution for discussion at a local meeting.

Anti-slavery sentiment strengthened during the era of the Revolution and Founding. Founding principles, based on natural law proclaimed in the Declaration of Independence and in several state constitutions, added philosophical force to biblically grounded ideas of human equality and dignity. Those principles informed free and enslaved blacks, including Prince Hall, Elizabeth Freeman, Quock Walker, and Belinda Sutton, who sent anti slavery petitions to state legislatures. Their powerful appeal to natural rights moved legislators and judges to implement the first wave of emancipation in the United States. Immediate emancipation in Massachusetts, gradual emancipation in other northern states, and private manumission in the upper South dealt blows against slavery and freed tens of thousands of people.

Slavery remained deeply entrenched and thousands remained enslaved, however, in states in both the upper and lower South, even as northern leaders believed the practice was on its way to extinction. The result was the set of compromises the Framers inscribed into the U.S. Constitution—lending slavery important protections but also preparing for its eventual abolition. The Constitution did not use the word “slave” or “slavery,” instead referring to those enslaved as “persons.” James Madison, the “father” of the Constitution, thus thought the document implicitly denied the legitimacy of a claim of property in another human being. The Constitution also restricted slavery’s growth by allowing Congress to ban the slave trade after 20 years. Out of those compromises grew extended controversies, however, the most heated and dangerous of which concerned the treatment of fugitive slaves and the status of slavery in federal territories.

The invention of the cotton gin in 1793 renewed and enhanced slavery’s profitability and expansion, which intensified both attachment and opposition to it. The first major flare-up occurred in 1819, when a dispute over whether Missouri would be admitted to the Union as a slave state or a free state generated threats of civil war among members of Congress. The adoption of the Missouri Compromise in 1820 quelled the anger for a time. But the dispute was reignited in the 1830s and continued to inflame the country’s political life through the Civil War.

Separating the sticky seeds from cotton fiber was slow, painstaking work. Eli Whitney’s cotton gin (gin being southern slang for engine) made the task much simpler, and cotton production in the lower South exploded. Cotton planters and their slaves moved to Georgia, Mississippi, and Alabama to start new cotton plantations. Many planters in the Chesapeake region sold their slaves to cotton planters in the lower South. This created a massive interstate slave trade that transferred enslaved persons through auctions and forced marches in chains and that also broke up many slave families.

In 1831, in Virginia, a large-scale slave rebellion led by Nat Turner resulted in the deaths of approximately 60 whites and more than 100 blacks and generated alarm throughout the South. That same decade saw the emergence of a radicalized (and to a degree racially integrated) abolitionist movement, led by Massachusetts activist William Lloyd Garrison, and an equally radicalized pro slavery faction, led by U.S. Senator John C. Calhoun of South Carolina.

The polarization sharpened in subsequent decades. The Mexican-American War (1846–1848) brought large new western territories under U.S. control and renewed the contention in Congress over the status of slavery in federal territories. The complex 1850 Compromise, which included a new fugitive slave law heavily weighted in favor of slaveholders’ interests, did little to restore calm.

A few years later, Congress reopened the Kansas and Nebraska territories to slavery, thereby undoing the 1820 Missouri Compromise and rendering any further compromises unlikely. The U.S. Supreme Court tried vainly to settle the controversy by issuing, in Dred Scott v. Sandford (1857), the most pro-slavery ruling in its history. In 1858, Abraham Lincoln, a rising figure in the newly born Republican Party, declared the United States a “house divided” between slavery and freedom. In late 1859, militant abolitionist John Brown alarmed the South when he attempted to liberate slaves by taking over a federal arsenal at Harpers Ferry, Virginia. He was promptly captured, tried, and executed and thereupon became a martyr for many northern abolitionists.

As the debate over slavery continued on the national stage, formerly enslaved and free black men and women spoke out against the evils of slavery. Slave narratives such as those by Frederick Douglass, Solomon Northrup, and Harriet Jacobs humanized the experience of slavery. Their vivid, heartbreaking accounts of their own enslavement strengthened the moral cause of abolition. At the same time, enslaved men and women made the brave and dangerous decision to run away. Some ran on their own, and others used the Underground Railroad, a network of secret “conductors” and “stations” that helped enslaved people escape to the North and, after 1850, to Canada. The most famous of these conductors was Harriet Tubman, who traveled to the South about 12 times to lead approximately 70 men and women to freedom. Free blacks faced their own challenges. Leaders such as Benjamin Banneker, James Forten, David Walker, and Maria Stewart spoke out against racist attitudes and laws that sought to limit their political and civil rights.

By 1860, the atmosphere in the United States was combustible. With the election of Abraham Lincoln to the presidency in November of that year, the conflict over slavery came to a head. Since Lincoln and Republicans opposed the expansion of slavery and called it a moral evil, seven slaveholding states declared their secession from the United States. And in April 1861, the war came. The next five years of conflict and bloodshed determined the fate of enslaved men, women, and children, and of the Union itself.