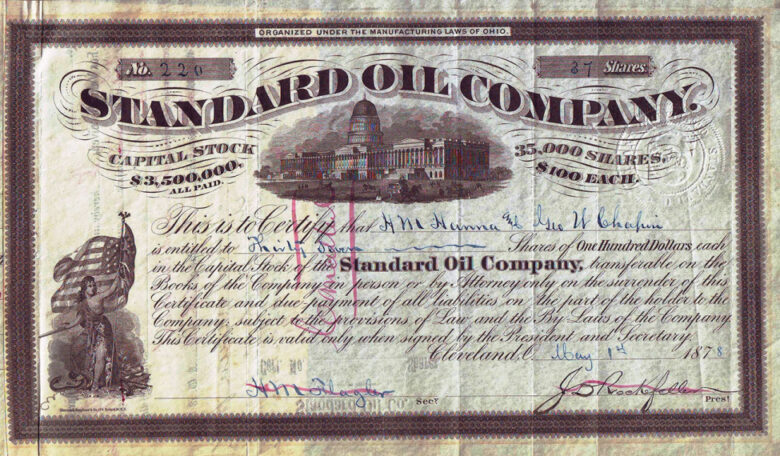 Use this Narrative after the Chapter 10 Introductory Essay: 1898-1919 to help students understand the growth of trusts and progressive attitudes towards them.

The story of oil in the United States begins in rural Pennsylvania in 1859, when an itinerant worker, Edwin Drake, adapted salt-well drilling techniques to tease oil out of the ground. At that time, John D. Rockefeller was working as a commission merchant, selling grain, hay, and other agricultural goods in partnership with an immigrant Englishman named Maurice Clark. With the outbreak of the Civil War, the fortunes of Rockefeller and Clark’s company were transformed as it moved into the business of selling farm goods to the Union army and became extraordinarily profitable. Then, in 1863, Rockefeller began diversifying into the emerging sector of petroleum refining.

The firm had been handling consignments of both crude and refined oil, and both partners had become aware of the significant markup in price that producers set during the processing of oil. Cleveland was one of several cities that had become prime locations for the building of refineries because they were linked to the Pennsylvania oil regions by rail. It was relatively inexpensive to get into oil refining, and it was clearly profitable. Thus, by 1866, oil refining had become the major source of revenue for Rockefeller and Clark. Rockefeller was the more entrepreneurial of the partners, and after Clark left the firm, Rockefeller seized the opportunity to grow Standard Oil into a major company. He saw that the problem for the industry was “ruinous competition,” a situation created when all producers lowered their prices to underbid the competition but then were wrecked when they could not even cover their costs. To solve this problem, Rockefeller set about finding the means to tame the market, reduce competition, and make even greater profits.

The source of the problem, as Rockefeller saw it, was the proliferation of refineries, which were cheap to build and could yield high profits, mostly from the production of kerosene to illuminate homes. Volatile prices meant that such profits were not always realized, however. Rockefeller set out to be the most efficient refiner, and his firm even earned additional money by selling the byproducts of refining that other producers threw away. But despite Rockefeller’s clear business advantages, no immediate withdrawal of less efficient producers took place. The only way to eradicate what he saw as ruinous competition was to take direct action to reduce the number of smaller firms and to consolidate and centralize production.

Oil refining was not the only sector in industrializing America that was plagued by market volatility. There was intense competition among the railroad companies as well, which brought gradually falling rates for passengers and especially for freight carriers throughout the post-war period but little benefit to the railroads themselves. From time to time, rates fell sharply as one railroad line aggressively lowered its prices to capture market share from its rivals, which had no choice but to follow suit. These rate wars were hated by almost all railroad executives. The only alternative seemed to be conducting some sort of collusive activity among themselves to set prices and share the business.

Rockefeller’s company had been the beneficiary of the railroad price wars, which cut the costs of shipping crude oil into Cleveland and refined oil out, but Rockefeller and other refiners were willing to trade in these deals for a more stable arrangement with the railroad companies. The plan was to establish the South Improvement Company, formalizing an arrangement in which the refiners agreed to ship their oil only on railroad lines that were part of the organization in exchange for freight rates that were lower than for refiners outside the company

Meanwhile, in a process called horizontal integration, Rockefeller bought out his competition during the “Cleveland Massacre,” a spree in which he took over 22 of the 26 refiners operating in Cleveland in only six weeks, by the simple expedient of threatening them with ruin if they did not agree to sell. In most cases, he paid what he judged to be the market value of the company’s assets, which always undervalued them. If the owners resisted, he showed them the account books of his own firm, which was usually enough to convince them of the wisdom of selling out for more money than they could make by operating.

Rockefeller was now in a position to begin the process of consolidating the refining business. To curtail excess capacity and dispose of old, inefficient equipment, he closed down a number of the Cleveland refineries he had purchased. He then regulated the production of refined oil to match market demand and turn off the spigot of excess supply that had caused prices to collapse when the market weakened. By the end of 1872, his firm controlled almost a third of U.S. refining capacity, up sharply from its 10 percent share of the market before the Massacre. In a process called vertical integration, Standard Oil aimed to control all parts of production, including extracting, refining, and shipping oil.

The depression of the 1870s drove Rockefeller’s remaining competitors to desperation, and he arranged joint-partnership deals with a number of them while buying others out entirely. He continued to invest in new equipment to maintain peak efficiency and lower costs; he also began the process of reducing his firm’s dependence on the railroads by developing a system of pipelines to transport oil from the oil regions into Cleveland. By the end of the 1870s, Rockefeller’s position in the refining market was even more secure.

The crowning touch for Rockefeller came in 1882 with the invention of the trust. The idea of the trust was to coordinate activities across the 40 or so firms, owned by dozens of partners in various states, in which Standard Oil had a financial interest. The mechanism was the issuance of certificates of trust, which enabled Rockefeller and his fellow trustees to make production and investment decisions on behalf of each partner in exchange for a guaranteed share of the profits of Standard Oil as a whole. The elimination of ruinous competition was complete, and Standard Oil controlled approximately 90 percent of refining capacity in the United States. Ironically, prices continued to drop for consumers, but Standard Oil’s virtual monopoly over the industry attracted the notice of reformers and regulators.

Business leaders quickly introduced trusts across a broad array of other sectors of the industrial economy. By the late 1880s, trusts controlled the production of whiskey, sugar, and cottonseed oil, as well as operations in a host of minor industries. But although some claimed the trust was a revolutionary development in business organization, it was also widely criticized as a means of suppressing competition and promoting monopolistic regimes of lower wages, higher prices, and greater profits. By the mid-1880s, state legislatures had begun initiating antitrust laws, and state prosecutors launched suits to break up trusts. In 1890, Congress passed the Sherman Antitrust Act, which followed the 1887 establishment of the Interstate Commerce Commission regulating railroad companies. Eventually, the government brought a case against Standard Oil because of the publication of The History of the Standard Oil Company, a remarkable piece of investigative journalism by one of the principal practitioners of the muckraking movement, Ida Tarbell.

Muckraking journalists sought to expose unfair, corrupt, and unhealthy practices as they advocated for state and federal regulations in the public interest. They reported on monopolies, political corruption in the U.S. Senate and among urban bosses in the cities, crowded urban tenements where immigrants lived, dangerous conditions faced by workers in factories, and the unhealthy food products sold to consumers. They helped educate the public and sometimes stirred enough concern that politicians were prodded to act. The term “muckraking” was coined by Theodore Roosevelt, who borrowed it from John Bunyan’s Pilgrim’s Progress and said, disparagingly, that these journalists were raking up the dirty and filthy underside of life.

Ida Tarbell’s early life was intimately tied in with the oil business. She was born in Western Pennsylvania in 1857, just two years before the Pennsylvania Oil Rush began. Her father, Franklin, shared in the rush, first by producing wooden storage tanks for oil and later by becoming an oil producer in his own right. He experienced firsthand the dislocation threatened by the South Improvement Company and was politically active in protesting the power of the trusts. Tarbell had been drawn to journalism in college and, in 1894, she became a special correspondent for McClure’s magazine, a muckraking periodical.

In 1901, Tarbell began to investigate Standard Oil; her articles appeared in every issue of McClure’s between November 1902 and May 1904 and were collected into a book in November 1904. Tarbell’s background in the oil regions and her long-held personal animosity toward the activities of the South Improvement Company made Standard Oil an obvious target. Her analysis was explosive. It revealed the inner ruthlessness of Rockefeller for all to see and clinically exposed the machinations used by Standard Oil in its efforts to establish dominance in the oil business.

Tarbell later claimed she was opposed to Standard Oil not simply because it was dominant but because of what she perceived to be unfair business practices. In this, she was out of step with most Progressive Era critics of the corporations, who considered mere bigness the enemy of the American dream of equal opportunity and social mobility. However, the Court interpreted the regulation of interstate commerce strictly under the Commerce Clause and prosecuted only a few trusts from 1895 to 1911.

It was during this period that the Department of Justice began formal proceedings against Standard Oil. However, when the Supreme Court handed down its decision in 1911, the Court appealed to a new concept, “the rule of reason.” The Court determined that size was not in itself bad but that “unreasonable restraints of trade” were illegal. Rockefeller and his partners were found guilty of unfair and illegal business practices, and Standard Oil was ordered to be broken up into 34 separate companies. Standard Oil no longer existed as such, but Rockefeller and his partners continued to profit from the expansion of the oil business, which by now was providing fuel for the increasingly important automobile.

By the time of his death in 1937, Rockefeller and his heirs had a net worth of some $1.4 billion. A considerable share of this fortune was allocated to philanthropy, principally for educational and public health programs. Ida Tarbell remained an important figure in investigative journalism and continued to write about American business leaders and industrial life into the late 1930s, but her work that had the greatest impact was her exposé of Standard Oil.

1. According to John D. Rockefeller, economic competition led to

3. The strategy followed by John D. Rockefeller and other like-minded industrialists to eradicate “ruinous competition” was to

5. Regulation of trusts in the late nineteenth century began with

6. Compared with other Progressive Era critics of corporations, Ida Tarbell was unusual in that she

7. Publication of Ida Tarbell’s investigative work led most directly to

8. The “rule of reason” established by the Supreme Court in the Standard Oil decision of 1911 showed that

1. This political cartoon most directly reflected a growing belief that

2. Which group would most directly support the point of view of this cartoon?

3. The point of view portrayed in this cartoon challenged what prevailing norm?