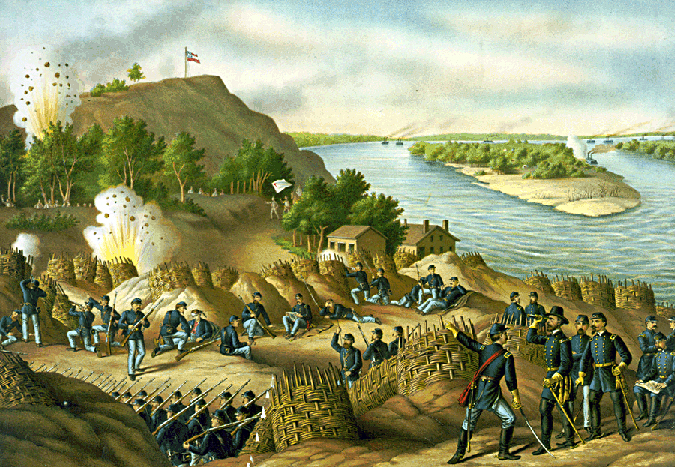 Use this Narrative during the Civil War unit to give students a comprehensive summary of the battles of Gettysburg and Vicksburg.

The spring of 1863 was a time of mixed fortunes for the Confederacy. Robert E. Lee had inflicted a major defeat on a Union army at Chancellorsville, but a Union army under Ulysses S. Grant had besieged the important city of Vicksburg on the Mississippi River. Meanwhile, in south central Tennessee, another Union army under William Rosecrans was in position to threaten Chattanooga, which, if captured by Union forces, would open the way to Atlanta, Georgia, a major Confederate stronghold.

Grant launched a brilliant campaign against Vicksburg. His problem was how to attack the city, which sits on a high bluff above De Soto Point, a sharp bend in the Mississippi; the city’s guns commanded the river below. To the north lay the Mississippi Delta, a swampy area between the Mississippi and Yazoo Rivers. The Confederates held strong defensive positions on the higher, drier ground to the east and northeast of the city.

After several failed efforts, Grant adopted a bold but risky plan, one that both his trusted subordinate William T. Sherman and President Lincoln questioned because it entailed abandoning his supply and communication lines along the Mississippi. Grant marched his army down the west bank of the Mississippi while Navy gunboats and transports ran the gauntlet of Confederate guns positioned above De Soto Point. Linking up with the transports, Grant crossed the river south of Vicksburg and then executed a lightning campaign with a great deal of mobility that sealed the fate of the Confederate stronghold.

During the 17 days after he crossed to the east bank of the river, Grant fought and won five major engagements, inflicting twice as many casualties on the enemy as his troops suffered and pinning the Rebel army inside the defenses of Vicksburg. With his right flank now anchored on the Mississippi and Yazoo Rivers north of the city, he effectively reestablished his lines of communication and supply.

The Confederate defenders repulsed several direct assaults against Vicksburg’s lines, so Grant settled in for a siege, the outcome of which was not in doubt. On May 24, Grant advised General-in-chief Halleck that the enemy “was in our grasp. The fall of Vicksburg and the capture of most of the garrison can only be a matter of time.” Under steady fire, the city surrendered on July 4.

After Lee’s victory at Chancellorsville in May, Confederates leaders had debated their strategic options. Some wanted to relieve Vicksburg, but Lee effectively argued that the best use of limited Confederate resources was to invade Pennsylvania.

On June 3, 1863, Lee slipped out of his base at Fredericksburg and headed west into the Valley of Virginia. On June 13, Union general Joseph Hooker began to move north in an attempt to keep his army between Lee and Washington, DC. Two days later, Lee crossed the Potomac. During his 1862 invasion of Maryland, Lee’s operational plan had been disrupted by unexpected resistance on the part of the Union garrison at Harpers Ferry. This time, Lee ignored the town, heading directly north from the Shenandoah Valley into the Cumberland Valley west of South Mountain.

President Lincoln had a series of disputes with his commanders such as George McClellan, who was notoriously delayed attacking the enemy because he had overestimated its strength. Lincoln, frustrated by Hooker’s defeat and inaction, removed him from command and named George Meade commander of the Army of the Potomac. The Union and Confederate armies each were operating in ignorance of the other’s locations until their cavalry forces had an encounter. On June 30, Lee and Meade ordered their forces to converge on Gettysburg. The Army of the Potomac was approaching from the southeast, and Meade ordered the Union corps closest to Gettysburg, General John Reynolds’s I Corps, to occupy the town. However, on the evening of June 30, John Buford’s Union cavalry division moved into position on the high ground west of town to hold on until the arrival of Reynolds the following morning.

Missing his cavalry division, Lee was still not certain of the location of the Union army. Once he got a sense of where the enemy was, he adopted a characteristically aggressive stance, although he wished to avoid a general engagement until he had concentrated his army. On the morning of July 1, the lead element of A.P. Hill’s corps approaching from the west clashed with Buford’s cavalry west of town. The battle of Gettysburg was on.

During the first day of the battle, Lee drove Union forces back to the high ground east of the town, shattering two Union corps in the process. The Union position on Cemetery and Culp’s Hills was strong. Had Confederate General Richard Ewell proven to be as aggressive as Jackson, it is likely the Confederates would have taken the Union position on Cemetery Hill that evening.

Encouraged by his success on the first day, Lee resolved to renew the attack on July 2. While Ewell attacked the Union right on Culp’s and Cemetery Hills, Longstreet, supported by a division of Hill’s corps on his left, was to deliver a flank attack on the Union line and help surround the enemy.

The fighting was fierce on the Union left at Little Round Top and Devil’s Den. Meanwhile, Major General Daniel Sickles, dissatisfied with his position at the base of Cemetery Ridge, advanced without orders to an exposed position. In doing so, he not only formed a salient but also created a gap between his right and another corps to his north. The Confederate attack eventually unhinged Sickles’s salient by sweeping the Peach Orchard and the Wheatfield.

Meade and Winfield Hancock tried to stem the Confederate tide by feeding troops into the gap created by the destruction of Sickles’s corps, but that created weaknesses elsewhere in the Union line. The Confederate attack was on the cusp of success when it broke down. Despite what Longstreet called “the best three hours’ fighting done by any troops on any battlefield,” the attack ground to a halt. All told, approximately 9,000 troops on each side became casualties that day.

Lee’s plan for July 3 called for actions against the Union flanks, a cavalry attack against the Union rear, and a main attack by George Pickett’s fresh division along with brigades from two of Hill’s divisions driving against the “hinge” in the Union line on Cemetery Ridge. Why did Lee launch an attack that today seems to be nothing short of a senseless waste of life?

First, Lee had a great deal of confidence in the offensive power and élan of the Army of Northern Virginia. Hooker had experienced the offensive prowess of this army and said its remarkable striking power “seemed to make the earth tremble on which we stood.” Second, although he had come close on the two previous days, Lee had not yet achieved his objective of destroying the Army of the Potomac, the reason he had invaded Pennsylvania to begin with. Third, a logistics problem loomed. Lee faced a shortage of forage for the army’s animals and of water as well, as local supplies dried up. He could not afford to remain in place for any length of time. Finally, Lee believed he had inflicted a great deal of damage on the Army of the Potomac. Indeed he had, shattering three Union corps and mauling many other regiments.

In addition, Lee had received fresh troops during the evening of July 2: Pickett’s division from Longstreet’s corps had arrived, and Jeb Stuart’s cavalry had finally been able to rejoin the army. Lee believed Meade had weakened his center to reinforce his flanks. Under the circumstances Lee believed, not unreasonably, that a concerted infantry attack led by his ablest corps commander and preceded by a massive artillery bombardment could crack the Union center on Cemetery Ridge. Lee had already seen his soldiers accomplish such a feat (without artillery support) during the Seven Days’ Battles of June 1862.

Gettysburg remains one of the costliest battles to occur on the North American continent. Union forces suffered approximately 23,000 casualties, and Confederates lost between 20,000 and 25,000 irreplaceable soldiers. On July 5, Lee moved south. Meade did not pursue the Confederates, much to the consternation of President Lincoln. But Meade was in no condition to pursue. The Army of the Potomac was in only marginally better shape than the Army of Northern Virginia.

July 4, 1863, was a good day for the Union cause, with great victories by Grant out west at Vicksburg and by Meade in the east at Gettysburg that turned the tide of the Civil War. It was the last time Confederate armies would launch a large-scale invasion of the North and spelled the beginning of their long-term decline. But there was much fighting – and dying – left to be done.

1. General Robert E. Lee’s invasion of Pennsylvania in 1863 differed from his invasion of Maryland in 1862 in that Lee

2. The key to General Ulysses S. Grant’s success at Vicksburg was his

3. Aside from its victories at Gettysburg and Vicksburg in 1863, the Union was on the verge of capturing control of what strategic southern city?

4. The Union victories at Gettysburg and Vicksburg signified

5. The battle at Vicksburg gave the Union

6. How did Gettysburg signal a change in Robert E. Lee’s strategy?

“Four score and seven years ago our fathers brought forth on this continent, a new nation, conceived in Liberty, and dedicated to the proposition that all men are created equal.

Now we are engaged in a great civil war, testing whether that nation, or any nation so conceived and so dedicated, can long endure. We are met on a great battle-field of that war. We have come to dedicate a portion of that field, as a final resting place for those who here gave their lives that that nation might live. . . .

The world will little note, nor long remember what we say here, but it can never forget what they did here. It is for us the living, rather, to be dedicated here to the unfinished work which they who fought here have thus far so nobly advanced. It is rather for us to be here dedicated to the great task remaining before us – that from these honored dead we take increased devotion to that cause for which they gave the last full measure of devotion – that we here highly resolve that these dead shall not have died in vain – that this nation, under God, shall have a new birth of freedom – and that government of the people, by the people, for the people, shall not perish from the earth.”

1. All the following ideas are expressed by Abraham Lincoln in the excerpt except

2. In highlighting “that we here highly resolve that these dead shall not have died in vain – that this nation, under God, shall have a new birth of freedom,” Abraham Lincoln conveyed that

3. According to the passage, the Civil War was a test of

Knowles, Anne Kelly. “A Cutting-Edge Second Look at the Battle of Gettysburg.” 2013. https://www.smithsonianmag.com/history/A-Cutting-Edge-Second-Look-at-the-Battle-of-Gettysburg-1-180947921/

Shea, William L., and Terrence Winschel. Vicksburg Is the Key: The Struggle for the Mississippi River. Lincoln, NE: University of Nebraska Press, 2003.