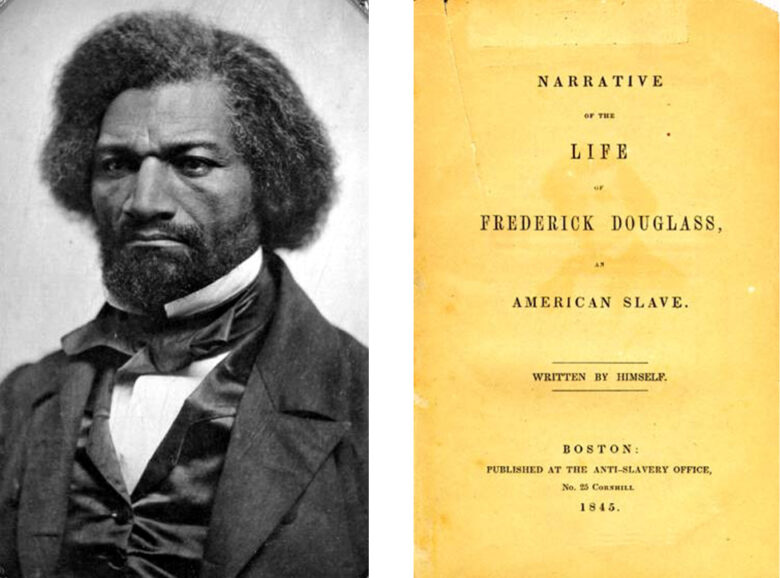 This Narrative explores the idea of slavery and abolitionism and can be used along with the Nat Turner’s Rebellion and William Lloyd Garrison’s War Against Slavery Narratives, as well as the David Walker, “An Appeal to the Coloured Citizens of the World,” 1829 and Frederick Douglass, Narrative of the Life of Frederick Douglass, 1845 Primary Sources.

Frederick Douglass grew up enslaved in Maryland, where his individual human dignity was stripped away by a system of owning other human beings. He barely knew his mother, who had had to walk several miles from another plantation to visit him when he was a little boy. He also did not know who his father was, though he guessed it was one of the white men on the plantation. He did not even know his birthday.

When Douglass was seven years old, his grandmother carried him to another plantation where he witnessed the horrors of slavery. He watched as his aunt was stripped to the waist and brutally whipped, causing blood to run down her back. “It was the first of a long series of such outrages . . . It struck me with awful force.” Douglass never became reconciled to such an unjust system.

Douglass’s owner sent the boy to live in Baltimore, Maryland, with Hugh and Sophia Auld. Sophia taught Douglass to read the Bible, which outraged her husband. Hugh argued it would ruin Douglass for slavery because he would reject his servitude; he forbade the lessons. The brilliant young boy immediately recognized there was something unnatural about slavery. He caught on to its immorality and the importance of reading to recover his humanity. “From that moment, I understood the pathway from slavery to freedom . . . The argument which he so warmly urged, against my learning to read, only served to inspire me with a desire and determination to learn,” Douglass later wrote.

The intrepid Douglass continued to learn to read. He surreptitiously read from the spelling copybook belonging to the Aulds’ son and from their Bible. He bribed and tricked white boys in the neighborhood to give him reading instruction. He acquired a copy of the Columbian Orator, which had speeches that taught him language and rhetoric. More importantly, the book contained lessons about the principles of liberty and emancipation from slavery. From newspapers, Douglass learned about Nat Turner’s slave rebellion and statesmen such as John Quincy Adams who were fighting the gag rule and the injustices of slavery in the halls of Congress.

When his masters died, ownership of Douglass was juggled until the brutal Thomas Auld owned him and demanded that the enslaved fifteen-year-old boy be sent to work as a field hand on his plantation. Douglass had converted to Christianity and tried to start a Sunday school for other slaves but was thwarted. Because he had a rebellious streak, Auld sent him to a “slave breaker” named Edward Covey to crush his spirit with the lash.

Within a week, Covey had whipped Douglass savagely. “Mr. Covey gave me a very severe whipping, cutting my back, causing the blood to run, and raising ridges on my flesh as large as my little finger,” Douglass later reported. Covey beat Douglass at least once a week. The dehumanizing routine of violence stripped Douglass of his human dignity. According to Douglass, “Mr. Covey succeeded in breaking me. I was broken in body, soul, and spirit. My natural elasticity was crushed, my intellect languished, the disposition to read departed, the cheerful spark that lingered about my eye died; the dark night of slavery closed in on me; and behold a man transformed into a brute!”

Douglass fell into a stupor and could not shake his malaise. One day, he suffered heatstroke and had to stop working because he was weak and dizzy. Covey discovered Douglass lying on the ground and thought him lazy. Covey gave the enslaved Douglass a “savage kick in the side, and told me to get up.” Douglass tried several times to rise and was beaten harder with every failure. A blow to his head with a hickory stick made “a large wound, and the blood ran freely.” He mustered the courage to defy Covey and walk seven miles to his master’s house to relate what Covey had done. The unsympathetic Auld ignored his pleas and sent him back to Covey. Never had Douglass felt more powerless and less like a man. He hid out for a day for relief but finally returned.

The next day changed Douglass’s life forever. Covey sought to tackle Douglass and beat him, but Douglass actually fought back. “At this moment – from whence came the spirit I don’t know – I resolved to fight; and, suiting my action to my resolution, I seized Covey by the throat.” Covey desperately solicited the help of another white man, whom Douglass kicked in the ribs and knocked down. Douglass wrote that he told Covey “Come what might; that he had used me like a brute for six months, and that I was determined to be used so no longer.”

Covey then tried to order another slave to intervene, but the man refused and left the two to finish their battle. Douglass thought the fight lasted for nearly two hours until finally it ended in a draw. As they stared at each other, panting frantically, Douglass noted with satisfaction that he had been neither bloodied nor whipped, but that he had bloodied Covey. For the next six months, Covey did not lay a finger on Douglass again. Douglass even ignored Covey’s threats and warned the slave breaker that he would get a worse beating than the first if he tried.

For Douglass, it was the turning point in his life. He had recovered his manhood and his dignity. “It rekindled the few expiring embers of freedom,” Douglass explained, “and revived within me a sense of my manhood. It recalled the departed self-confidence, and inspired me again with a determination to be free.” Douglass exercised his duty to resist injustice and secure his natural rights to restore his spirit and humanity. Having destroyed any hold that slavery might have over his soul, he was now a slave in name only and would no longer live in fear or submission. His soul longed for liberty. “It was a glorious resurrection, from the tomb of slavery, to the heaven of freedom. My long-crushed spirit rose, cowardice departed, bold defiance took its place; and I now resolved that, however long I might remain a slave in form, the day had passed forever when I could be a slave in fact.”

Douglass escaped to the North and freedom through the Underground Railroad a few years later. He married and started earning his own money, keeping the fruits of his labor. His work and marriage contributed further to his recovering his human dignity and becoming a man. “I was now my own master. It was a happy moment, the rapture of which can be understood only by those who have been slaves. It was the first work, the reward of which was to be entirely my own.” Douglass was now a man with a strong sense of self-worth who devoted himself to ensuring equal rights for all Americans through the abolitionist and women’s suffrage movements.

1. What text was instrumental in teaching Frederick Douglass how to read and learning the principles of liberty as a young man?

2. Which of the following best describes Frederick Douglass’s childhood?

3. Where was Frederick Douglass born and raised?

4. How did Douglass achieve his freedom?

5. Frederick Douglass’s life was most changed by

6. What did Frederick Douglass’s transformative fight with Edward Covey teach him?

“I was glad to learn, in your story, how early the most neglected of God’s children waken to a sense of their rights, and of the injustice done them. Experience is a keen teacher; and long before you had mastered your A B C, or knew where the ‘white sails’ of the Chesapeake were bound, you began, I see, to gauge the wretchedness of the slave, not by his hunger and want, not by his lashes and toil, but by the cruel and blighting death which gathers over his soul.

In connection with this, there is one circumstance which makes your recollections peculiarly valuable, and renders your early insight the more remarkable. You come from that part of the country where we are told slavery appears with its fairest features. Let us hear, then, what it is at its best estate – gaze on its bright side, if it has one; and then imagination may task her powers to add dark lines to the picture, as she travels southward to that (for the colored man) Valley of the Shadow of Death, where the Mississippi sweeps along.”

Letter from Wendell Phillips, Esq., Boston, April 22, 1845, included as an introduction to Narrative of the Life of Frederick Douglass, An American Slave, Written by Himself

1. The author of the excerpt most likely would support what social reform in the antebellum era?

2. According to this author, practices of slaveholders in which part of the United States were most brutal?

Douglass, Frederick. Narrative of the Life of Frederick Douglass, An American Slave: Written by Himself. New York: Penguin, 1986 (Originally published, 1845).