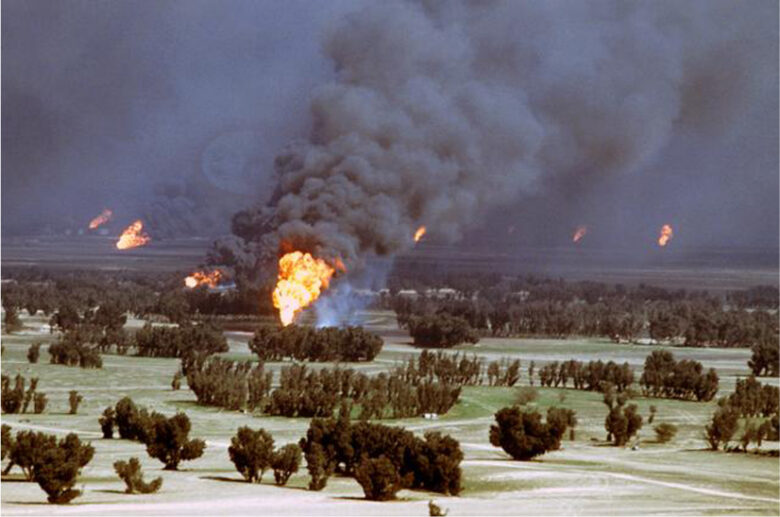 Use this narrative after students have covered 9/11 to discuss its impact on oil consumption and the U.S.-Iraq relationship.

All energy is derived from the sun. Solar power converts sunlight directly into electricity, wind turbines convert wind into electricity, but fossil fuels (coal, oil, and natural gas) are more indirect forms of solar energy, created hundreds of millions of years ago when vast tropical forests were buried in the earth. The use of coal became widespread in the 1600s, and the invention of the coal-burning steam engine in the late eighteenth century powered new steamships and locomotives, allowing people to travel faster and farther. Petroleum, a liquid fuel that stored more energy than coal, provided the next technological advancement. In 1876, a German inventor named Nikolaus August Otto patented the internal combustion engine, which soon propelled automobiles, locomotives, ships, and aircraft. Fossil fuels provided the power for the technological innovations of the industrial age that fundamentally reshaped the world.

Among the most valuable commodities on the planet, oil radically transformed human societies, and its use promoted global economic growth. In the beginning of the twentieth century the gross world product – the sum of all economic activity worldwide – amounted to perhaps $1 trillion, but by the end of the twentieth century, that figure had risen to $29 trillion (in 1990 dollars).

Fossil fuels did not come without costs, however. An economy based on oil requires access to oil fields and, if it lacks sufficient supply, the importing of oil from other nations that produce it. Demand for oil has led to energy dependence on the part of some nations and even conflicts between nations. The burning of fossil fuels also causes air pollution and has been linked to global warming.

The most immediate problem for the United States in the 1960s and 1970s was maintaining continued access to oil. Domestic oil production was constrained by a lack of new sources: offshore drilling was still developing, and gaining access to Alaska’s oil reserves required the completion of the Alaskan oil pipeline. The nation could not meet the demands of its growing, car-dependent economy alone, forcing it to import oil from other regions, especially the Middle East. The United States, thus, was drawn into this turbulent region, where it attempted to ensure stable oil production.

America’s first Middle Eastern intervention occurred in 1954. A popular uprising in Iran had overthrown the shah, but fears of a possible turn toward communism and instability in the oil markets prompted a covert CIA operation to reinstall the shah as leader of the country. The operation succeeded, and the shah remained a staunch U.S. ally until 1979, when he was overthrown and exiled.

The difficulties of navigating relationships with different Middle East countries and contending American national strategic and economic interests led to substantial crises in the 1970s. In the 1973 Yom Kippur War, Egypt and Syria invaded Israel to win back territory lost in a 1967 conflict. As a result, the Organization of the Petroleum Exporting Countries (OPEC), angry about American support for Israel (and the devaluation of the dollar, which lowered the price of oil because oil was tied to the dollar), decided to embargo oil shipments to the United States. The resulting contraction of supply created massive shortages and long lines at gas stations. The price of a gallon of gasoline in the United States quadrupled, inflation started to climb, and Americans began to fear that their energy future was no longer in their hands. Accustomed to seemingly limitless growth after World War II and an apparently endless supply of oil, Americans were unsure how to react. The U.S. economy limped through the 1970s and 1980s with stagnant growth and increasingly high interest rates.

In 1979, Islamic revolutionaries took power in Iran, and angry Iranian radicals stormed the gates of the American embassy. They took the staff of the embassy hostage and threatened their lives. President Jimmy Carter ordered a rescue attempt that resulted in an embarrassing and disastrous failure when, in April 1980, the mission failed terribly when eight American soldiers died in an accidental aircraft collision. The radicals finally released the hostages early in President Ronald Reagan’s first term, but the Islamic Republic of Iran had become a foe of the United States.

In the fall of 1990, Iraq accused the small, oil-rich nation of Kuwait of stealing oil and invaded the country. President George H. W. Bush refused to allow the occupation and built a multination coalition to remove the Iraqis from Kuwait and restore the Kuwaiti government. In Operation Desert Storm, the U.S. coalition began its offensive with a massive aerial bombardment of Iraqi targets, followed by a three-day ground invasion. Kuwait’s leaders regained power, and oil production in the region stabilized. Iraqi dictator Saddam Hussein remained firmly in power in Iraq, if somewhat chastened by the episode.

On a beautiful fall morning, September 11, 2001, the world watched in horror as two hijacked aircraft plowed into the World Trade Center towers in New York and one flew into the Pentagon in Washington, DC. A fourth hijacked plane – also bound for Washington – crashed in a field in Pennsylvania after heroic passengers overpowered the al-Qaeda hijacker. The resulting collapse of the “Twin Towers” of the World Trade Center and murder of almost 3,000 Americans and people from several other countries shocked the world. A grieving American public demanded action. President George W. Bush blamed the al-Qaeda terrorist network, led by Osama bin Laden, which took credit for the assault, and within a month, American aircraft began bombing targets in Afghanistan, an impoverished and war-ridden nation controlled by the ruling Taliban government that had been sheltering bin Laden and al-Qaeda. In his speech to a joint session of Congress after the attacks, President Bush declared, “Every nation in every region now has a decision to make. Either you are with us, or you are with the terrorists.” Implied was the right of the United States to attack not just terrorist networks but also the nations that sheltered them.

American attention soon turned back to Iraq. Although Secretary of State Colin Powell initially did not support intelligence assessments that claimed a link between al-Qaeda and Iraq (assessments later proved mistaken), he addressed the United Nations arguing for military intervention in Iraq in 2003. Later that year, the United States invaded Iraq with the goal of removing Saddam Hussein from power. Although the wars in Iraq and Afghanistan had little to do with oil, Iraq is a major oil-producing nation and access to oil is a major national security issue. Indeed, members of the George W. Bush administration hoped a democratic Iraq would help spread democracy across the region and help bring peace and stability to the region. Although Iraq became a fragile democracy, this transformation came at tremendous cost.

Several factors in recent years have led the United States to rely less on imported oil. More fuel-efficient automobiles have helped, but the greatest factor has been the advent of new technologies to produce more domestic oil, and chief among these is hydraulic fracturing, or “fracking.” Drillers detonate explosives deep within rock formations that contain gas or oil, fracturing the rock layers. Next, combinations of mud, water, and chemicals are pumped into the fractured formations, allowing the oil and gas to be released and pumped to the surface. This technology, brought into widespread use in the 2010s, has radically increased oil production, opening new oil fields and revitalizing fields once thought exhausted. Although some critics have blamed fracking for causing water contamination and earthquakes, the government has generally approved the practice.

Many scientists and climatologists predict that a warming planet could cause cataclysmic environmental problems: sea level rise, droughts, famines, fires, more powerful and destructive storms, and the extinction of many forms of life, including species beneficial to humanity. In October 2018, the United Nations’ Intergovernmental Panel on Climate Change (IPCC) released a report warning that humanity had only 12 years to prevent climate change from becoming unstoppable. If nations reduced their carbon footprint, that is, the amount of carbon released by their use of fossil fuels, then the worst scenario could be avoided. To do this, the panel recommended keeping the planetary temperature increase to between 1.5°C and 2°C, as proposed in the 2015 Paris Accords to limit greenhouse gas emissions.

Although there is widespread agreement among climate scientists and industry leaders on the dangers of climate change, skeptics remain. Some question whether global warming is caused by humans or is part of a natural warming cycle. Others are concerned that regulations and international agreements will carry a price tag in the trillions of dollars, cost the United States millions of jobs, or put the country at an economic disadvantage if it adheres to the Paris agreement. Many people want to pursue green technology that will help sustain both the planet and economic growth.

Fossils fuels certainly deserve credit for transforming and enriching human societies, but alternative forms of energy, such as solar, wind, nuclear power, and others may have to supersede them to lessen the effects of climate change. Even as humans increasingly adopt green technologies and alternate energy sources, however, shifts in strategic and economic interests around the globe will occur.

2. The industrial age was made possible by the ability to harness the energy of

3. As world demand for oil increased, which region increased its geopolitical importance?

4. The embargo on oil to the United States in the 1970s was a response to its

5. In the first decades of the twenty-first century, U.S. reliance on imported oil has

6. Points of conflict between the United States and the Middle East in the last 50 years have included all the following except

7. U.S. efforts to decrease dependence on foreign oil have included

1. What most likely caused the trend seen in the chart?

2. Which of the following best contextualizes the creation of this chart?

McNeill, J.R. The Great Acceleration: An Environmental History of the Anthropocene since 1945. Cambridge, MA: Belknap Press, 2016.