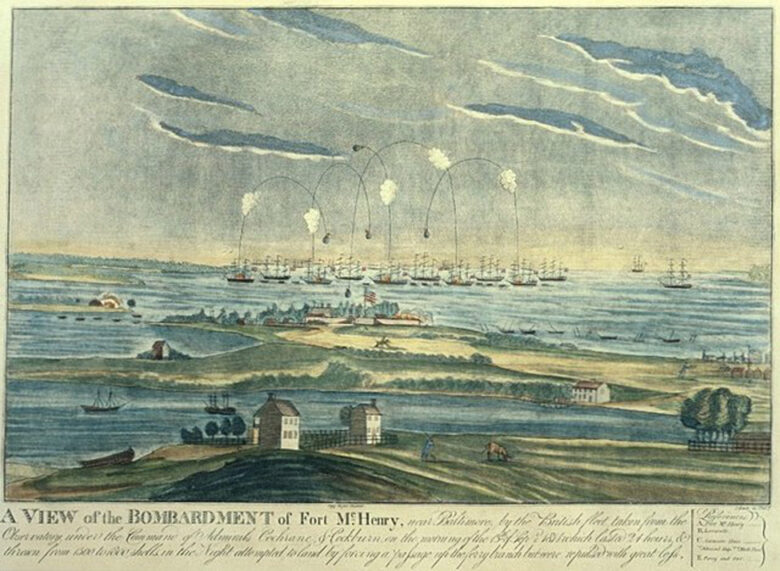 This Narrative should follow the Tecumseh and the Prophet Narrative and be assigned to students along with the Old Hickory: Andrew Jackson and the Battle of New Orleans Narrative to paint a picture of the War of 1812.

The War of 1812 was begun when Congress declared war on Great Britain for repeatedly violating U.S. sovereignty. American ships were being stopped and their sailors were being impressed into British naval service. The war was primarily fought at sea and in Canadian and American territory around the Great Lakes.

In August 1814, however, a British fleet sailed up the Chesapeake Bay and unloaded more than four thousand British redcoats and marines, who routed American troops in an embarrassing defeat at Bladensburg, Maryland. The British entered Washington, DC, and burned the U.S. Capitol and White House in retaliation for the American burning of York (modern-day Toronto) in Canada. Admiral Alexander Cochrane and his officers then decided to assault Baltimore and moved on the port city a few weeks later. Major General Samuel Smith of the Maryland militia prepared the city’s defenses for an assault.

On September 12, 1814, in the predawn hours, 4,700 British troops disembarked at North Point on the Patapsco River for a fifteen-mile march on Baltimore led by General Robert Ross. The Royal Navy detachment, meanwhile, prepared to sail up the river, level Fort McHenry in Baltimore Harbor, and contribute to the bombardment and burning of Baltimore. With a great deal of bluster, General Ross reportedly claimed he would “sup in Baltimore tonight, or in hell.” As he was urging his men forward against the first American lines, however, he was shot dead by an American rifleman.

Some five thousand American militia were deployed along a narrow part of the peninsula to block the British path. The two sides exchanged sharp artillery fire before the British attacked. In several bloody encounters, the British twice forced the Americans to retreat to their main battle line. The attack continued the next day, but the British suffered more than 350 casualties in their attacks on the fortified positions and were forced to withdraw. The infantry attack on Baltimore had failed.

Meanwhile, at 6:30 in the morning of Tuesday, September 13, 1814, as the sun was rising over Baltimore Harbor, Major George Armistead and Captain Joseph Nicholson peered through their spyglasses at five British bomb ships swinging into position one and a half miles from star-shaped Fort McHenry. Armistead was the commander of the fort and Nicholson was the commander of the Baltimore Fencibles, a volunteer artillery company that joined in the defense.

The one-thousand-man garrison of army regulars and volunteer troops was up and preparing the thirty-six guns for the defense of the fort and of Baltimore. They sweated because of the heat of the late summer day and their nerves, which were stretched to the limit.

Suddenly, the ship Volcano fired its massive mortars, lobbing two-hundred-pound explosive shells into the fort. The four other bomb ships joined in, as did the rest of the fleet. Houses in the vicinity began to shake as the ground rumbled. Inaccurate but terrifying screaming rockets were launched from the Erebus, adding to the deafening sound.

The Americans were not shaken for long. Major Armistead mounted a parapet and ordered the soldiers to return fire. Several cannonballs scored direct hits on British ships. The Americans gave a celebratory cheer when the British withdrew because of the unexpected severity of their returned fire.

But the British had simply moved out of range of the American guns, and their bomb ships could still hit the fort. Armistead thought this was a distressing disadvantage for the men in Fort McHenry. Still, they kept at their posts until he ordered them to take cover in a moat because of the rain of shells.

The Americans were frustrated that they were being bombarded and suffering casualties but were unable to return fire. An escaped slave in the army had his leg blown off, and another soldier was killed by a direct hit while shaking uncontrollably from shell shock. Everyone was terrified and waiting to be blown to smithereens when a shell crashed through the roof of the magazine where three hundred barrels of gunpowder were stored, but miraculously the gunpowder did not explode.

In the early afternoon, the sun disappeared behind a large bank of clouds. Suddenly, a deluge of rain from a nor’easter pummeled both sides, ruining gunpowder and fuses and giving the Americans in the fort a brief respite. The British compensated by moving the fleet closer to fire broadsides from several other warships. The Americans, who had lowered their flag and raised a storm flag, because of the rain, quickly fired their own guns. The Volcano immediately suffered five hits that caused casualties and started to withdraw. The Devastation suffered a staggering blow to her port bow that caused her to take on water. As the British fleet again retreated out of range, the Erebus was damaged and had to be towed back. However, the British onslaught from the bomb ships continued even more furiously.

As darkness arrived, Admiral Cochrane had to admit things were not going according to plan. He had boasted to his men that the fleet would reduce the walls of the fort and force a surrender in less than two hours, leaving Baltimore vulnerable to a coordinated land-sea assault. But the walls stood firm, and the inhabitants of the fort clearly had no intention of surrendering.

The shelling continued through the night, and at approximately 2 a.m., the earth shuddered from a concerted bombardment of the fort as the fleet opened up with a terrible roar. The barrage was actually cover for a raid, with troops from several barges preparing to slip past the fort and outflank the American infantry. The barges were sighted, however, and the fort aimed its fire at them, scoring direct hits and sinking a couple as the others retreated back to the fleet.

The British fleet and Fort McHenry exchanged intermittent fire as dawn approached, and the exhausted men on both sides struggled to stay awake. The British had failed to destroy the fort, however, and finally sailed off. The American defenders for their part were relieved to have survived the British onslaught and were exultant, despite their fatigue.

The rising sun was hidden for a while in a cloudy, misty morning. Francis Scott Key was observing from a ship in the harbor when rays of sunlight illuminated the storm flag waving in a slight breeze. A morning shot pierced the air, and the immense 30-by-42-foot star-spangled banner was raised as the men stood at attention. Key pulled a letter from his pocket and started to jot words and notes on it for a song that came to mind. “O say can you see by the dawn’s early light . . .” it began, and it ended with “O’er the land of the free, and the home of the brave.” The song later became the United States’ national anthem in 1931.

The American forces had redeemed themselves at Baltimore after the national humiliation in Washington, DC. Only a few months later, on December 24, U.S. commissioners including John Quincy Adams, Henry Clay, and Albert Gallatin signed the Treaty of Ghent, officially ending the War of 1812.

2. Which song was written by Francis Scott Key, who witnessed the assault on the Baltimore fort?

4. The reason the United States declared war against the British in 1812 was

5. During the War of 1812, the British successfully invaded

6. Which is the correct chronological order of events related to the War of 1812?

“Every considerate and unprejudiced man, in every part of the union, freely admits we have just cause for war with both the great belligerents, and especially England; whose maritime depredations are not only far more extensive than those of rival, . . . But a state of war is desired by no man; . . . It is very certain that no good citizen of the United States would wantonly promote a rupture with Great Britain, or any other country. The American people will never wage offensive war; but every feeling of the heart is interested to preserve the rights our fathers won by countless hardships and innumerable sufferings. . . . Every measure that Forbearance, could devise, has been resorted to – and we have suffered injuries, particularly in the wealth of our citizens, which no independent nation ever submitted to. Embargo was tried: through the timidity of the 10th congress, excited by the insolent clamors of a small, but wicked, portion of the people, aided by the inefficiency of the laws for enforcing it, it failed of its foreign operation. . . . The conquest of Canada will be of the highest importance to us in distressing our enemy, in cutting off his supplies of provisions and naval stores for his West India colonies and home demand. . . . To our mind there are facts ‘as strong as proofs from holy writ,’ to convince us that all our difficulties with the Indians originated with the British in Canada.”

Article from the Niles Weekly Register, May 30, 1812 (Published by Hezekiah Niles in Baltimore, MD)

1. The sentiments expressed in the excerpt were mainly a response to

2. The excerpt best reflects an effort by supporters to

3. This excerpt most directly reflects a growing belief that

Vogel, Steve. Through the Perilous Fight: From the Burning of Washington to the Star-Spangled Banner: The Six Weeks that Saved the Nation. New York: Random House, 2013.