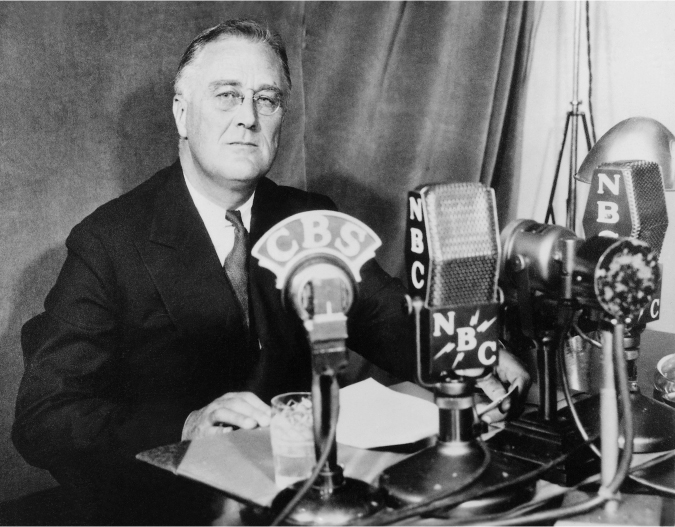 Use this narrative to discuss the United States’ isolationist approach to foreign policy during the interwar period.

As the country remained mired in the Great Depression in the early to mid-1930s, it began to appear ever more likely that the world was headed for another major war. Japan conquered Manchuria in 1931 and invaded China in 1937. In Europe, Benito Mussolini’s fascist regime in Italy had launched an invasion of Ethiopia in 1935, and Adolf Hitler, who had taken power in Berlin in 1933, engaged in flagrant violations of the Treaty of Versailles.

In this increasingly dangerous environment, Americans became convinced that their involvement in World War I had been a grave mistake – one that must not be repeated. The best-selling book Merchants of Death, published in 1934, made the provocative claim that U.S. banks and corporations had actively plotted to draw the country into war in 1917 for war profiteering. A Senate subcommittee chaired by Senator Gerald P. Nye of North Dakota soon began an investigation into the book’s charges, and although the Nye Committee found no direct evidence of a conspiracy to embroil the United States in the conflict, it did reveal that U.S. firms had made massive amounts of money from the country’s involvement. In a time when “big business” was being blamed for the Great Depression, this was enough to convince Americans that business was guilty and that something had to be done to prevent the banks from leading the country into war again.

As a direct result of the Nye Committee’s hearings, Congress passed a series of laws – in 1935, 1936, and 1937 – collectively referred to as the Neutrality Acts. Taken together, these laws authorized the president to issue a declaration, when war broke out anywhere in the world, making it illegal to lend money or sell arms and ammunition to any country involved in the conflict. Other items could be sold to belligerent countries, but only if those countries paid cash for them and transported them in their own ships, a provision commonly referred to as “cash and carry.” Finally, Americans were prohibited from traveling on ships belonging to countries at war. In other words, the Neutrality Acts sought to identify the factors that had allegedly drawn the United States into World War I, and then to ban them.

The Neutrality Acts were invoked on several occasions in the 1930s and remained in effect in September 1939, when Great Britain and France declared war on Germany over Hitler’s invasion of Poland – thus marking the beginning of World War II in Europe. President Franklin Roosevelt took to the airwaves to assure the American people that the United States would stay out, but given the circumstances under which the war began, he recognized that most Americans naturally sympathized with Britain and France. “Even a neutral has a right to take account of facts,” he told his listeners. “Even a neutral cannot be asked to close his mind or his conscience”.

Within days of the outbreak of the war, Roosevelt asked Congress to remove the arms embargo provisions from the Neutrality Acts. There was no reason, the president claimed, why weapons and ammunition could not be sold on a cash-and-carry basis, just like other exports. This set the stage for the first in a series of legislative battles against those whom Roosevelt called “isolationists.” These senators and representatives, as well as their supporters, insisted that tampering with the Neutrality Acts was the first step toward actual involvement in the war. Ending the arms embargo, they argued, was a backhanded way of aiding Britain and France. After all, the powerful British Navy already prevented Germany from importing anything from the United States, and critics thus charged that the change would benefit only the Allies. Nevertheless, American sympathy for the British and French was such that both houses of Congress voted by substantial majorities to change the neutrality laws.

The European war took an ominous turn in spring 1940 when German forces shocked the world by overrunning France in a six-week military campaign. Suddenly, Great Britain was standing alone against Germany and Italy. That summer, Americans listened anxiously to radio reports of German bombers pummeling British cities and German submarines sinking British merchant vessels. Roosevelt provided some assistance, transferring 50 obsolete U.S. destroyers to the Royal Navy in exchange for 99-year leases on British bases in the Western Hemisphere, but by the end of 1940, Britain’s prime minister, Winston Churchill, had alerted the president to a new problem. The United Kingdom was running out of cash with which to purchase U.S. arms and other goods. Unless the situation changed quickly, the British would be cut off from their most important source of war materials.

The Roosevelt administration’s answer to this dilemma was a legislative proposal called Lend-Lease. It would give the president the power to transfer weapons, ammunition, and any other war materials to any country whose defense he deemed vital to the national security of the United States. The materials would then be returned after the war or be replaced if they had been damaged or destroyed. Roosevelt warned that if Germany defeated Great Britain, the United States would be Hitler’s next target. He compared his proposal to lending a garden hose to a neighbor whose house was on fire; doing so only made sense, because if the fire went unchecked it could easily spread to the lender’s own home.

The fight over Lend-Lease was one of the most significant debates on a matter of foreign policy in U.S. history. The plan was opposed by a wide variety of isolationist organizations, most notably the America First Committee, a group that boasted more than 800,000 members in 450 chapters scattered around the country. America First counted among its members many successful business owners, politicians, and celebrities, most notably the famous aviator Charles Lindbergh. Lindbergh and other speakers traveled around the country denouncing Lend-Lease. They told their audiences that Britain’s position might be unfortunate but providing aid to one side would bring the country much closer to involvement in a war that was none of America’s business. Roosevelt and his supporters denied this, countering that providing the British with the tools they needed to defeat Hitler’s Germany would ensure the United States would not have to become an active participant in the conflict. Ultimately, most Americans (and their representatives in Washington, DC) agreed with the president, and Congress approved the Lend-Lease Act in March 1941.

During the spring and summer, the debate over U.S. neutrality turned to events in the Atlantic. In an effort to protect British ships laden with Lend-Lease goods, Roosevelt began sending U.S. Navy vessels ever farther from shore. He was quick to refer to these missions as “patrols,” because under the neutrality laws it was illegal for U.S. warships to take part in British convoys. Isolationists objected, claiming that Roosevelt was intentionally sending ships into harm’s way in the hope of triggering an international incident that would bring America into the war. Their fears seemed confirmed when, in September 1941, a German submarine fired on the destroyer U.S.S. Greer. The president responded with an angry speech in which he called German U-boats “rattlesnakes of the Atlantic” and ordered Navy commanders to “shoot on sight” any such vessels they encountered. That autumn saw regular instances of hostile fire between U.S. ships and German submarines, although the two countries remained officially at peace with one another.

Because most Americans were paying attention to affairs in Europe in 1941, it came as a surprise that when the United States did enter the war, it did so by way of events in the Pacific. Since 1937, Japanese forces had been waging an undeclared war in China; in 1940, Tokyo concluded an alliance with Germany and Italy and began making threatening moves into Southeast Asia. The Roosevelt administration sought to deter Japanese aggression through economic sanctions, culminating in July 1941, when it effectively cut off all exports to Japan, including oil, to hamper the Japanese war machine. However, rather than curbing Japan’s desire to dominate East Asia, the sanctions inspired its military leaders to become even more aggressive.

On December 7, 1941, Japanese forces launched attacks against multiple targets in Southeast Asia and the islands in the Pacific. To prevent the U.S. Pacific Fleet from interfering, a task force of Japanese aircraft carriers had traveled quietly across the Pacific and sent its planes to make a surprise raid at dawn against the U.S. naval base at Pearl Harbor in Hawaii. By the time they finished, four U.S. battleships had been sunk, nearly 200 planes had been destroyed on the ground, and more than 2,400 U.S. service members had been killed.

An outraged President Roosevelt famously called December 7 “a date which will live in infamy” and asked Congress for a declaration of war against Japan, which was immediately made. Four days later, Hitler declared war on the United States. The America First Committee, recognizing that the country must now fully commit itself to war, dissolved within a few weeks.

1. In the early to mid-1930s, examples of a world in growing international crisis included all the following except

2. As a result of the Nye Committee hearings, U.S. foreign policy during the mid-late 1930s can best be described as

3. U.S. foreign policy during the interwar years was primarily motivated by a desire to

4. In an effort to aid the Allies despite isolationist sentiment in Congress at the start of World War II, President Franklin Roosevelt supported all the following except

5. The Lend-Lease Act was a significant departure from most of American interwar foreign policy because it

6. Between September 1939 and the beginning of December 1941, President Roosevelt sought to help the Allies in all the following ways except

7. The America First Committee’s most famous member was

1. The image provided most directly reflected a growing belief that

2. The image was most directly influenced by the

3. Which group would most likely approve the policy depicted in the photograph?

4. Which of the following developments represented a continuation of the sentiments illustrated in the photograph?

Hamby, Alonzo L. For the Survival of Democracy: Franklin Roosevelt and the World Crisis of the 1930s. New York: Free Press, 2007.