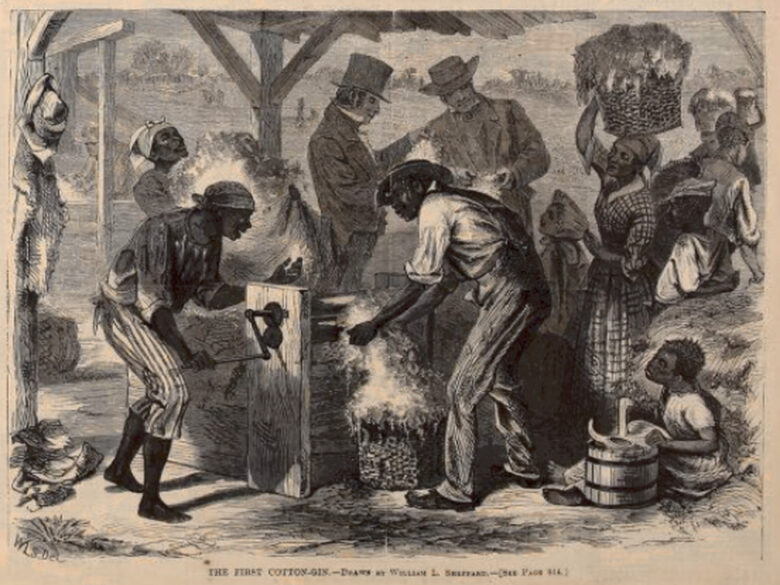 This Narrative should be assigned to students to help illustrate the expansion of cotton production and slavery in the South.

In 1792, Eli Whitney graduated from Yale and traveled south to Georgia to become a tutor for the children of Caty Greene, the widow of Revolutionary War hero Nathanael Greene. Whitney had been recommended for the post by Phineas Miller, manager of Greene’s plantation and an acquaintance of Whitney’s. Although the tutoring position did not work out, Greene did invite Whitney to stay at her plantation in Georgia as a guest. He appreciated her hospitality and contributed his mechanical skills to the repair of equipment around the farm and the fashioning of new devices to make tasks easier.

One day, a group of veterans who had served under General Greene during the American Revolution came to the plantation for a visit. Mostly planters themselves, they lamented the state of agriculture in the South and voiced their frustration about the amount of labor it took for their slaves and laborers to remove the seeds from short-staple cotton. Because it took an entire day to separate the sticky seeds from only about one pound of cotton fiber, it was an unprofitable task. When one of the men wished there was a machine that could remove the seeds, Greene proposed that Whitney was the man to invent one.

The need was great because the planters desperately wanted to export more cotton to England, which was at the beginning of its market revolution. The textile factories with their spinning and weaving machines needed cotton as the raw material to produce their goods. If they could use a machine to process their raw cotton, the southern planters would have a newly profitable crop and could rejuvenate southern agriculture.

Whitney accepted Greene’s challenge to make a machine to remove cotton seeds and produced a crude but workable model of the “cotton gin” (gin being southern slang of the time for “engine”). He had had an idea that could transform the landscape and create great fortunes, but he did not have the money to develop, patent, and manufacture his invention. Whitney overcame this hurdle by entering into a partnership with Miller, who agreed to provide financial backing in return for a percentage of ownership in the proceeds.

Flush with Miller’s investment, Whitney headed north to secure a patent and begin manufacturing the cotton gin with the help of machine tools producing uniform parts. The potential for this invention excited even Secretary of State Thomas Jefferson, who wrote to Whitney in November 1793: “I feel a considerable interest in the success of your invention, for family use…Favorable answers to [my] questions would induce me to engage one of them to be forwarded to Richmond for me.” With such endorsements, Whitney was understandably anxious to get into business and anticipated great success.

Whitney applied for a patent in Philadelphia in October 1793 and was awarded one in March 1794. Instead of selling the machines (which were too expensive for most planters), Whitney and Miller planned to clean the cotton for a percentage of the crop. However, many imitators throughout the South stole Whitney’s idea and produced their own machines, violating his patent rights.

Whitney spent the next several years engaged in litigation to protect his invention. He had difficulty winning the lawsuits or collecting money, but his legal struggles led the cotton gin to pass into widespread use much faster than if he had had an exclusive right to the patent and no imitators. The enslaved workers of southern cotton planters processed incredible amounts of cotton with their cotton gins.

In 1812, Congress refused to renew Eli Whitney’s patent on the cotton gin, effectively putting him out of business. Whitney had lost the exclusive right to his invention, one that had transformed American agriculture. U.S. cotton exports had grown from less than 150,000 pounds before the cotton gin to more than 18,000,000 pounds by the turn of century.

The effects of the cotton gin on the American economy, the geographical expansion of the new nation, and the growth of slavery were staggering. For decades, tobacco had been a declining crop that depleted the soil in the Chesapeake region, but cotton grew well in the Lower South. Planters and their enslaved workers raised the cash crop to meet demand from British and northern textile factories. Within only a decade, by 1805, cotton production rapidly increased from two million pounds to more than sixty million pounds. By the 1830s, that number would increase exponentially to more than 500 million pounds annually and became the largest American agricultural export.

The cotton gin also dramatically affected the geographical expansion of the new nation. Cotton planters and their slaves moved to Georgia, Mississippi, and Alabama to start new cotton plantations. Americans were driving into the frontier to the north in search of farm land for cotton and opportunity. Many southerners left the Atlantic Seaboard and moved west because of cotton’s new potential, and the Southwest grew dramatically thanks to new cotton plantations.

The expansion of cotton helped fuel the growth of an interlinked market economy in the United States, including in the North, because of the subsequent expansion of textile manufacturing and demand for cotton there. However, the cotton gin also helped ensure the survival and growth of slavery in the United States. The contradictory forces of expanding freedom and spreading slavery had a dramatic impact on politics in the early republic. The addition of new states and the accompanying growth of power in Congress, sometimes for the North and sometimes for the South, created sectional tensions that were narrowly resolved through a series of compromises, beginning with the Missouri Compromise in 1819-1820. Meanwhile, national debates over protective tariffs and internal improvement related to the cotton economy caused sectional disputes and eventually threatened the survival of the Union.

1. Eli Whitney set out to

2. On which of the following did the cotton gin have the most immediate significant impact?

3. How did the invention of the cotton gin most significantly affect the economic development of North America?

4. The invention of the cotton gin led to all the following during the first half of the nineteenth century except

5. The increased need for slave labor during the first quarter of the nineteenth century led to

6. What was the main incentive for the invention of the cotton gin?

1. A major impact on the United States of the event depicted in the drawing was that

2. A significant long-term impact of the event depicted was that

3. Which statement does the drawing best support?

4. Which best describes the changes shown in the map that occurred during the first quarter of the nineteenth century?

5. A major controversy associated with the events depicted in the map stemmed from