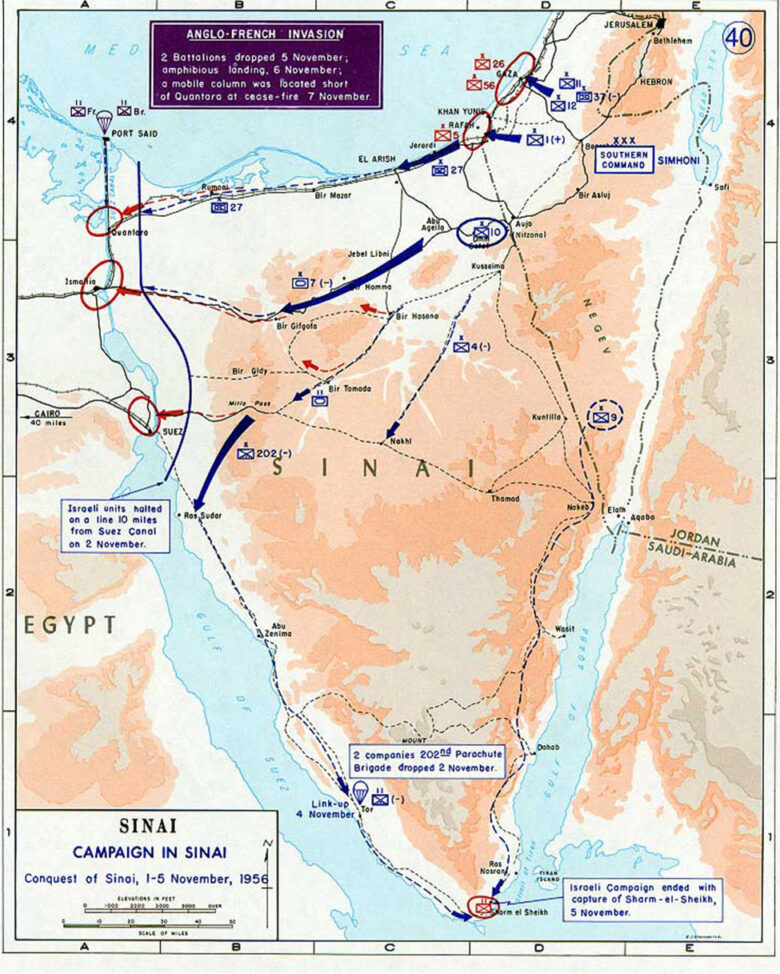 Nasser came to power after a military coup overthrew Egypt’s pro-British King Farouk in 1952, and he quickly emerged as the most charismatic and controversial figure in the Arab world. Nasser dreamed of building a huge Nile River dam to generate electricity, control flooding, and provide water for irrigation. In December 1955, the United States and Great Britain agreed to help finance the purchase of equipment and materials for the initial stage of the construction of the new Aswan Dam, with the expectation of providing additional aid as the work progressed. The Eisenhower administration wanted to build the dam to counter Soviet influence in the Middle East; a secondary goal was for Egypt to invest its limited resources in the dam, rather than in weapons to be used against its neighbor to the east, the Jewish state of Israel.

Despite those goals, the American commitment to Aswan was fragile. Nasser’s penchant for anti-Western rhetoric made him a suspect figure in the United States and Europe. In February 1955, he had requested a relatively small amount of military aid from the United States. The Tripartite Treaty of 1950, however, had committed the United States, Great Britain, and France to limiting weapons sales in the region in an attempt to avoid an arms race and to maintain a balance of power between Israel and the Arab states. Accordingly, the Eisenhower administration denied Nasser’s request for military aid.

In response, the Egyptians negotiated an even larger arms purchase from Soviet-dominated Czechoslovakia. Shaped by a Cold War mentality, American policy makers in the 1950s mistrusted any neutral nation that did business with a communist regime. Nasser further strained his relationship with the United States in March 1956 when he extended diplomatic recognition to the People’s Republic of China. In reality, Nasser trusted the Soviet Union no more than he trusted the Western powers, and the Eisenhower administration consistently overestimated the appeal of communism in the Arab world.

Watch this newsreel footage, “Cairo Hails Nasser as Situation Sends Dulles to England,” which shows various aspects of the Suez Crisis in 1956 to learn more. Popular in the early half of the twentieth century, newsreels were short motion pictures highlighting current events and news of the day and shown in cinemas.

The Aswan aid package had other problems unrelated to the Cold War. It drew opposition from the pro-Israel lobby in the United States, from members of Congress representing cotton-producing states who did not want to subsidize irrigation projects for Egyptian cotton farmers, and from members who regularly opposed most forms of foreign aid. Relations between Egypt and Israel were not improving, and Nasser had attached some conditions to American aid that the United States considered unacceptable, although they were later withdrawn.

Eisenhower did not follow the negotiations with Nasser closely. He had delegated responsibility for them to Secretary of State John Foster Dulles, a capable but hardline anti-communist with an abrasive personality. Eisenhower had also been distracted by a serious heart attack in 1955, in 1956 by surgery for an intestinal blockage, and later that year by his reelection campaign. The president spent most of June and half of July in the hospital or at his Gettysburg, Pennsylvania, farm recuperating from his operation. On July 19, 1956, in a 10-minute meeting shortly after Eisenhower had resumed his regular duties, Dulles recommended cancellation of U.S. aid for Aswan, and the president agreed. That afternoon, when the Egyptian ambassador appeared at Dulles’s office to request the next installment of American aid, Dulles rather abruptly informed him that the United States was withdrawing from the project. Eisenhower said later that the affair might have been handled more diplomatically.

In any event, Nasser announced a week later that he was nationalizing the Suez Canal and

In any event, Nasser announced a week later that he was nationalizing the Suez Canal and would use tolls from canal traffic to finance construction of the Aswan Dam. The canal had been operated by the Suez Canal Company pursuant to a treaty signed in 1888; the British government and French investors owned almost all the stock in the company. The world’s most strategic waterway, the Suez Canal carried twice the traffic of the Panama Canal, and in the mid-1950s, it generated $100 million annually in gross revenues and $30 million in net profit. More than 40 nations used it regularly, and its biggest customer, Great Britain, relied on tankers transiting the canal to supply it with oil from Middle Eastern oil fields.

British Prime Minister Anthony Eden and French President Guy Mollet seem to have decided almost immediately to retake the canal by force. Great Britain and France had an obvious interest in protecting their investment and ensuring access to the canal, but far more was at stake. They hoped to use the canal crisis to cripple or perhaps topple Nasser. Mollet resented Nasser’s support for rebels in the French colony of Algiers. Eden, who was in poor health and taking medicine that may have impaired his judgment, convinced himself that Nasser was another Hitler who threatened Britain’s survival as a major power. Israel, constantly engaged in border skirmishes with the Arab states around it, had more realistic fears and collaborated with the British and French in secretly planning a military operation: Israel would invade the Sinai Peninsula, Eden and Mollet would call for a ceasefire that would require Israel and Egypt to withdraw from the canal zone, Nasser would presumably reject the ceasefire, and British and French troops would then seize the canal.

Eisenhower, now fully engaged, saw the crisis differently. Although the British, French, and Israelis had successfully concealed their plans from the president, they made no secret of their preference for military action, which Eisenhower strongly opposed. Administration lawyers, including Attorney General Herbert Brownell, advised the president that Egypt had a right under the power of eminent domain to nationalize the Suez Canal Company as long as it compensated the owners, which Nasser had promised to do. Eden and Mollet had questioned Nasser’s ability to operate the canal, but the Egyptian president pledged to keep it open, and traffic actually increased after Egyptian canal workers replaced Europeans.

Eisenhower thought an invasion would be counterproductive and would probably result in the closure of the canal, at least temporarily. He also worried that invasion would be perceived as an act of Western imperialism that could drive much of the Middle East and Africa into the arms of the Soviets. The Tripartite Treaty had obligated its signatories to defend Middle Eastern nations from aggression, which raised in Eisenhower’s mind the almost unthinkable possibility that if Egypt were attacked, the United States would find itself at war with its closest and most important allies. On the other hand, if instead the Soviet Union came to Egypt’s defense, the United States would be forced to intervene on behalf of Great Britain and France, and the result could be a nuclear war.

Through the summer and into the fall, Eisenhower sought a diplomatic settlement. At a meeting of the major maritime nations in London, Dulles won support for a proposal to put the canal under the operation of an international commission. Eisenhower thought Nasser probably would have accepted an Indian proposal for an international advisory commission, but he deferred to the secretary of state, and Eden and Mollett opposed the Indian plan. Nasser, as Eisenhower had feared, rejected the conference’s proposal.

On October 29, Israeli forces launched their invasion of the Sinai. As they had planned weeks earlier, Britain and France called for a ceasefire, which Nasser conveniently rejected. Allied planes almost immediately began bombing targets in Egypt, and on November 5, the British and French began landing paratroopers and ground troops near Port Said at the northern end of the canal. The operation collapsed almost immediately. The Eisenhower administration secured a resolution from the United Nations General Assembly condemning the invasion and, more significantly, the British found they could not sustain the operation without American support. Once the fighting began, Nasser blocked the canal with sunken ships, and saboteurs shut down a major pipeline bringing oil from Iraq to Western Europe. Deprived of their major sources of oil, the British needed dollars to purchase oil in the United States, but the administration refused to cooperate, and the British were forced to withdraw from Egypt, taking the French and Israelis with them.

Eisenhower had prevented the Suez Crisis from escalating into a major conflict. His opposition to the invasion won him some credit as an opponent of European imperialism, but he had not been so strident as to permanently damage the Western alliance. Seeing the containment of communism as his highest priority, he soon announced what came to be known as the Eisenhower Doctrine: the United States would support Middle Eastern governments threatened by Soviet aggression. The president exercised a strong yet prudent American foreign policy that avoided U.S. direct military involvement in several conflicts around the globe. Yet divisions within the Arab states, rivalries among them, and their hostility to Israel prevented him from achieving the regional stability he wanted.

1. Egyptian president Gamal Nasser said he wanted to use toll revenues from the Suez Canal to

2. Like the Truman Doctrine, the Eisenhower Doctrine pledged to

3. All the following countries occupied the Suez Canal after it was nationalized by the Egyptians except

4. The United States’ offer of a minimal amount of military assistance in the Middle East was motivated by the desire to

5. In the Suez Crisis, the Tripartite Treaty could have led the United States into

6. The international reputation of which nation was greatly damaged as a result of the Suez Crisis?

“In discussion of a report that the French favored arming the Israelis, there was agreement that for the present it is desirable not to mix the present problem with the Israeli question. The President did not think the means that would be required for Western countries to go in and operate the Canal would be very great at the present time, but said it is a question whether there is a basis for such action in terms of world opinion. The problem arises that, lacking intervention now, the Canal operations may gradually deteriorate without giving a specific occasion for intervention at any later time. This has been a deliberate, unilateral seizure, and people around the world are expecting some reaction now. Of course, if there were seizure of the nationals of Western countries, that would give a basis for action later. . . . In discussion the President developed an idea that the French and the British might make a statement that they do not recognize the validity of the Egyptian action, that they will continue to operate the Canal, putting the matter before the World Court for determination, and putting tolls in escrow until that determination is made. We might join in such a statement; also the NATO countries might join in it.”

Memorandum of a Conversation with the President, White House, Washington, July 28, 1956

1. The ideas expressed in the excerpt suggest the United States would engage which of the following approaches to end the Suez Crisis?

2. Which of the following influenced Eisenhower’s decision-making process in the issue discussed in the excerpt?

3. The thoughts expressed in the excerpt most closely reflect the ideals of