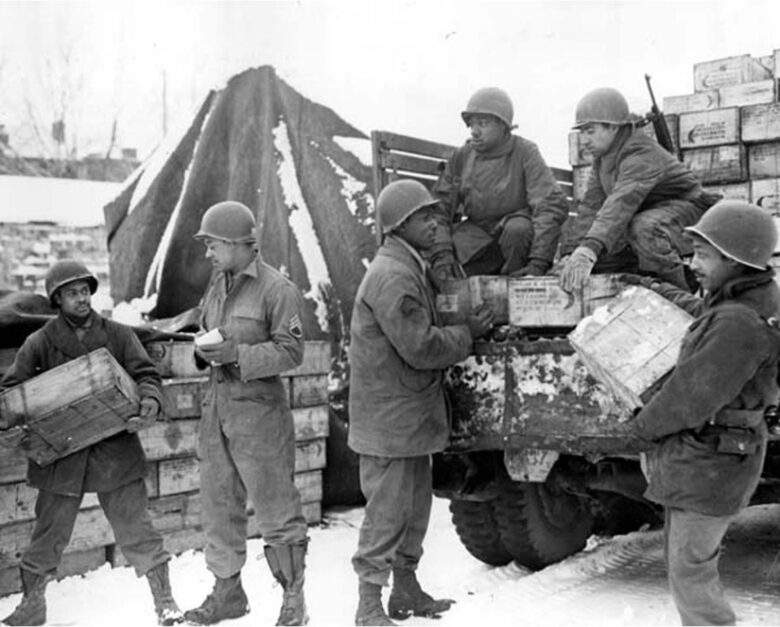 Use this narrative with the A. Philip Randolph, The Call to Negro America to March on Washington, 1941 Primary Source to explore African American experiences during WWII both at home and abroad.

It was a hot day in 1944 – two days after the Fourth of July and exactly one month after D-Day – when a white bus driver in Texas noticed the young black lieutenant sitting beside a light-skinned woman in the middle of the bus. She was the wife of a fellow black officer, but in Jim Crow Texas, the law required African Americans to sit at the back, filling the seats from back to front toward an imaginary line in the middle. When the driver barked, “Move back,” the black officer suggested the driver stick to driving.

During World War II, crowded public transportation became a battleground, and black riders, many of them military men and women, were thrown off buses and even killed for breaking “the color line.” After arguing with the lieutenant, the bus driver called the military police, who ran up asking where the “nigger lieutenant” was. The officer replied that he would “break in two” anyone who said that word. Then he faced a general court-martial.

Lieutenant Jack Roosevelt Robinson was already a well-known University of California, Los Angeles (UCLA), football star, and his case became a symbol of the African American fight for equality at home and abroad. At war with a fascist country that persecuted Jews and other groups, African Americans realized that they fought for “victory against our enemies at home and victory over our enemies on the battlefields abroad. We Have a Stake in This Fight . . . . We Are Americans, Too!” The “Double V” campaign inspired resistance to segregation among civilians and military stateside and reminded black soldiers abroad of the stakes of their mission. By the time Lieutenant Robinson was tried, the military justice panel simply wished the case would disappear. The verdict was not guilty. Three years later, former lieutenant Jackie Robinson desegregated major league baseball.

African Americans who fought in World War II carried the burden of proving the capabilities of their race. During World War I, pressure had forced the Army to train black officers, but all units were segregated. As the United States entered World War II, President Franklin Roosevelt refused black activist Asa Philip Randolph’s demands to desegregate the military. Some two-thirds of black soldiers were in “service units,” working in “supply, maintenance, and transportation.” They were generally denied the “right to prove themselves in combat,” but service units proved crucial to winning the war. Others served in anti-aircraft battalions, worked with radar, and in tank battalions. The Tuskegee Airmen formed six flying squadrons. In all, 1.2 million African American men served in World War II. The public saw the battlefield as the place “where manhood and citizenship were defined” and “toward the end of the war, many [African Americans] saw action.” The Woman’s Army Auxiliary Corps (WACS) accepted black women volunteers in 1942, but the Navy did not accept black women in the Women Accepted for Volunteer Emergency Service (WAVES) until 1944. Some 6,500 black women served in the armed forces.

About 2,000 African Americans landed in France on D-Day, June 6, 1944, including the 320th Barrage Balloon Battalion and 1,200 truck drivers and quartermasters. One of them remembered, “The consensus of whites was they didn’t want blacks to get any glory, especially on that day.” However, three groups of black soldiers abroad – the Tuskegee Airmen, the Red Ball Express, and the 92nd Regiment Buffalo Soldiers – proved their heroism. Their victory against fascism abroad ultimately opened a path for the civil rights movement against their “enemies at home.”

In the seven weeks necessary to secure France’s Cotentin Peninsula, on which the Allied forces had landed before beginning to cross France toward Germany, black transport servicemen massed supply, gasoline, dump, and ammunition trucks. The Germans had destroyed all the railroads, so on August 21, 1944, they began driving to the front every night, securing “long lines of communications” to supply troops at the front with “beans, bullets, and fuel.” Called the Red Ball Express, the motor transport division was 73% African American. One black soldier recalled that “all of this driving was done at night with black-out lights,” and they “drove every night, 30 to 40 miles an hour” on roads cleared of traffic. Ultimately, they delivered 412,000 tons of supplies to the front as it moved east.

As American troops encountered massive battles in the push toward Germany, combat rules broke down. The African American 761st Tank Battalion landed on Omaha Beach in October 1944 and fought all the way to Germany by May 1945. General George Patton told them, “Men, you are the first Negro tankers to ever fight in the American Army. I would never have asked for you if you weren’t good.” General Dwight D. Eisenhower integrated individual platoons of African American infantrymen on front lines in March 1945, where exhausted white soldiers welcomed them.

The historic 92nd Infantry Division of African Americans, called the Buffalo Soldiers, landed in North Africa in the summer of 1943. In September, they invaded Italy along with other Allied forces. As the Germans retreated, the Italian resistance fought alongside the 92nd. The Italian campaign often devolved into street fighting in small towns, and it took two years to oust the Germans. Black soldier Donald Lee fought furiously in the Serchio River Valley campaign at the walled town of Lucca alongside British and Nisei soldiers; the latter were second-generation, American-born Japanese.

In the same campaign, Buffalo Soldier and 1st Lieutenant John R. Fox, a 29-year-old officer from Cincinnati, found his platoon surrounded after hours of street fighting on the day after Christmas 1944. As he realized they would be overrun, he called in defensive artillery to fire on his own position. The soldier he reached by radio said, “You won’t survive.” Fox replied, “Fire it.” Fox and his men sacrificed themselves, but the artillery barrage delayed the enemy advance, and other units arrived to stop the Germans.

Alexander Jefferson was born in Detroit in 1921, the son of a schoolteacher mother from Georgia and a father who had first migrated from South Carolina to Atlanta. The black couple moved to Detroit in 1920, where the father found industrial work. As a teenager, Jefferson read all about World War I airplanes, hung out at an airfield, serviced planes, and took his first flight. When he tried to join the Army Reserve in his senior year at Clark University in Atlanta, the recruiter told him he was “too skinny” at 115 lbs. and sent him downstairs to drink water and eat bananas, which brought him to the required 116 lbs.

In 1943, Jefferson joined what the War Department called “the Tuskegee Experiment.” The name came from the fact that whites believed African Americans lacked the ability to be pilots. As Jefferson recalled, whites thought we “were uncoordinated and couldn’t see in the dark.” The hand-picked black flyers – all college graduates – trained at Tuskegee Institute and formed four P-51 squadrons: the 99th, 100th, 301st, and 302nd. Together, these squadrons formed the 332nd Fighter Group, nicknamed the “Red Tails” for air identification. Jefferson flew as a member of the 332nd.

The Tuskegee Airmen had to prove the “experiment” a success. Colonel Benjamin O. Davis, Jr., an African American, commanded Jefferson’s 332nd fighter group, which landed in Italy in September 1942. The Red Tails flew as B-17 and B-24 bomber escorts over southern France, Germany, and Italy, fighting off German fighters. Jefferson remembered flying into “big black clouds” of anti-aircraft flack. It sounded like “pebbles on a tin roof” at 24,000 feet. The Red Tails also strafed German defense posts on the ground. On August 12, 1944, in his nineteenth mission over Germany, Jefferson strafed “across a target at tree-top height” when a shell went through his plane. Although he had practiced tree-top runs at Tuskegee, he had “never had one minute of training on how to get out of an airplane.” He pulled his parachute as the plane exploded around him. Astonishingly, the Germans who captured him had a complete dossier on all the Red Tail pilots, from their high school grades to their families’ tax records.

Jefferson was only 80 miles from Berlin. After a few weeks, the Russians approached from the east. Jefferson’s captors “put them out on the road” and marched the captives to another German prison, where they stayed for four months until General George Patton’s Third Army liberated them. Then Jefferson heard about a place a few miles away “where there’s a whole lot of dead people,” and went over with friends. The place was Dachau concentration camp. Jefferson later recalled that the ovens were still warm, and there was a “30 ft. long table with gold teeth.”

It was back in New York, as he walked down a ship’s gangplank toward military processing tables where a white sergeant informed him that the races were to be separated with whites going to the right and blacks going to the left. It broke his heart.

1. The name of the Double V campaign during World War II stood for

2. During World War II, the Tuskegee Airmen, the Red Ball Express, and the 92nd Regiment Buffalo Soldiers were noteworthy for

3. The 1.2 million African Americans who served in the armed forces during World War II did so in

4. The purpose of the Tuskegee Experiment during the 1940s was to

Situations such as the one depicted in the photograph led to

“WHEREAS it is essential that there be maintained in the armed services of the United States the highest standards of democracy, with equality of treatment and opportunity for all those who serve in our country’s defense: NOW, THEREFORE, by virtue of the authority vested in me as President of the United States, by the Constitution and the statutes of the United States, and as Commander in Chief of the armed services, it is hereby ordered as follows: 1. It is hereby declared to be the policy of the President that there shall be equality of treatment and opportunity for all persons in the armed services without regard to race, color, religion or national origin. This policy shall be put into effect as rapidly as possible, having due regard to the time required to effectuate any necessary changes without impairing efficiency or morale.”

1. The position outlined in this excerpt was most directly shaped by

2. This excerpt is an example of a

3. This excerpt most directly reflected a growing belief that

Thompson, James G. “Should I Sacrifice to Live ‘Half-American’? [Letter to the Editor]”Pittsburgh Courier, January 21, 1932, 12-13. https://righttofightexhibit.org/home/pdfs/FFRTF-MiddleSchoolClassroomGuide.pdf

Nalty, Bernard. Strength for the Fight: A History of Black Americans in the Military. New York: Simon and Schuster, 1989.