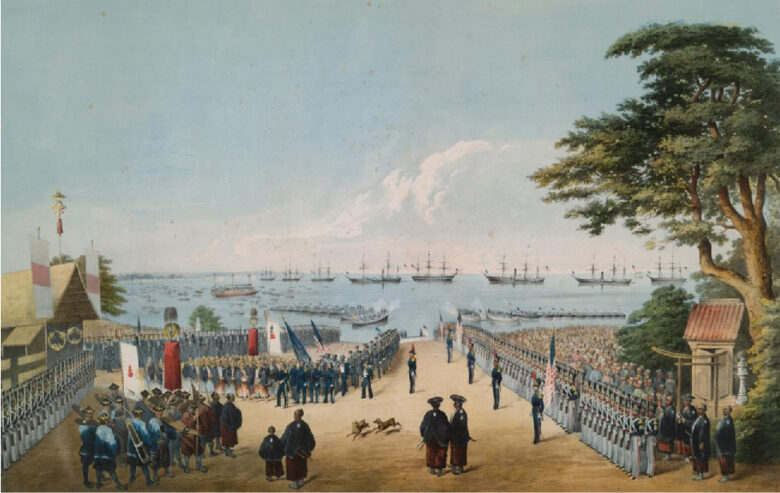 Use this Narrative to help students understand the United States’ motivations for opening trade with Japan.

In the summer of 1853, the Japanese people watched apprehensively as large black ships from the United States entered the port of Uraga in Japan. Commodore Matthew Calbraith Perry, known to his men as “Old Bruin,” commanded the fleet that was to break the longstanding isolation of Japan from the outside world. The Commodore arrived with orders from President Millard Fillmore to deliver a letter to the Emperor, Tokugawa Ieyoshi, seeking to commence friendly relations between the two countries.

Commodore Perry was fiercely determined to succeed in his mission: to open up Japan to American trade and influence. Before 1852, he had never set foot in Asia or sailed in Pacific waters. But since the acquisition of the Oregon territory in 1846 and the taking of California from Mexico in 1848, the settlement of the western coastline of the United States had increased interest in the Pacific trade. Japan’s strategic location between California and China made it especially appealing because it could serve as a coaling station for merchant steamships on route to and from China. In addition, the American whaling industry had been advancing into Pacific waters to search for sperm whales, which had largely been depleted in the Atlantic. All these factors awakened interest in Japan, but the country had remained virtually isolated from the West for over two centuries. Would its isolation continue?

This was not the first time the United States had aspired to establish contact with Japan, but every earlier effort had failed. Commodore David Porter proposed an expedition to open Japan in 1815, but his request was denied. In 1837, Charles W. King, an American merchant in trade with China, landed his ship in Japan to establish commercial relations, on the pretext of returning Japanese castaways who had been shipwrecked. He retreated after the Japanese opened fire on his ship. In 1846, the U.S. government organized a formal expedition, sending Commodore James Biddle into Edo Bay to begin treaty negotiations, but the Japanese sternly refused and sent him away. What enabled Commodore Perry to succeed when all his predecessors had failed?

Commodore Perry had a plan: he sought to intimidate Japan into signing a treaty of friendly relations with a show of U.S. naval prowess. His challenge was to secure negotiations without actually resorting to the use of force. Perry strategically chose to enter Japanese waters with an armada of large black steamships to impress the Japanese with the spectacle of American formidability. Mustered at his insistence, this was the largest naval force the United States had ever sent overseas so far. Requiring no sails to move, the steamships were a marvel of naval technology to the Japanese. Perry’s mission had three objectives: first, to seek assurances that Japanese authorities would protect and provision American sailors who were shipwrecked in Japanese waters; second, to gain permission for American ships to enter Japanese ports to obtain food, water, fuel, and other necessary provisions; and third, to obtain permission for U.S. merchant ships to trade their goods in Japanese ports.

Commodore Perry first landed in Okinawa, an island off the coast of Japan and controlled by an outside entity, the prince of Satsuma. Okinawans were not ethnically or culturally the same as the Japanese people, so establishing Okinawa as an American outpost in the Pacific was advantageous but did not effectively complete the mission. Perry’s negotiations with the Okinawans, however, served as a dress rehearsal for what was to come, and even more importantly, enabled him to put on a show of power for the Japanese leadership, who watched from a distance.

With his eyes on the capital city of Edo, Perry docked at Uraga. When Japanese officials boarded the ship, he remained in his cabin. Having made the strategic decision to interact only with top-level officials, he instructed his flag lieutenant to convey their purpose of delivering a letter from President Fillmore to the Japanese Emperor. Although Perry’s aide reassured the Japanese that the squadron’s intentions were peaceful, he also made it clear that if they refused to relay the letter to the emperor, the commodore would deliver it by force. Perry did not truly understand the power dynamics of the Japanese bakufu, as the government was called, which is why he sought to negotiate with the Japanese emperor, the shogun. The shogun, Tokugawa Ieyoshi, situated in Edo, was actually ill at the time and was more of a symbolic figurehead than a practical leader. Power had shifted in Japan from the weak shoguns to appointed leaders; in 1853, effective ruling authority fell to Chief Senior Councilor, Lord Abe Masahiro. In the end, Commodore Perry and Lord Abe were the ones primarily responsible for securing the terms of the treaty.

While Perry’s fleet remained docked, the Japanese people, fearing attack from the black ships, stood on emergency alert. Seeking to avoid war and buy time, Lord Abe directed his officials to accept the letter in a grand ceremony six days later in Kurihama. As a military band played “Hail Columbia,” one of several songs (including “The Star Spangled Banner”) that, in 1854, served as unofficial national anthems for the United States, Perry, wearing his blue dress uniform, marched a contingent of 250 sailors and marines to the meeting spot and presented the documents to agents of the Japanese government. Perry bestowed gifts, including Kentucky bourbon, Colt six-shooters, and a model train, on the Japanese and insisted they accept them, even though the Japanese officials strongly protested because Japanese law forbade receiving gifts. In pressing the Japanese to yield on this small matter of ceremony, Perry asserted his power over the situation. He agreed to return in the spring of 1854 to receive the Shogun’s response and give the Japanese bakufu time to reflect on his demands.

Lord Abe was in an impossible situation. He knew that if he accepted Perry’s letter and broke Japan’s historic seclusion, his people would view this as a sign of failure and vulnerability. Given the political divisions within his own government, yielding to the Americans could provoke civil unrest, possibly resulting in the deposition of the Tokugawa Shogunate. At the same time, Lord Abe also had to consider the possible results of denying Perry’s requests; it could risk war with the United States, which would likely end in defeat and possibly colonial domination. After two centuries of peace, the strength of the Japanese military had waned and much of the samurai (warrior) class was employed in other occupations. What was Lord Abe to do?

After much deliberation, Abe decided to seek a middle ground and accept two of Perry’s three demands. He agreed to offer assistance to shipwrecked sailors and provide fuel and other provisions to American ships at two Japanese ports: Hokodate in the north and Shimoda in the south. These ports were distant enough from Edo that he could maintain the isolation of the capital. But on the issue of allowing foreign trade, Abe stood his ground and refused. Perry reluctantly accepted this concession because he believed he had achieved the first step in opening the door and trade would follow. His instincts were correct; President Franklin Pierce, Millard Fillmore’s successor, signed the Treaty of Kanagawa that Perry and Lord Abe had negotiated on March 31, 1854. Four years later, the United States and Japan signed a commercial treaty establishing formal trade relations.

Was Perry bluffing when he threatened to use force? We will never know what he would have done if the Japanese bakufu had refused to negotiate. His strategy of intimidation was more effective than even he realized at the time, because he was unaware of the extent to which Japan was both militarily unprepared and politically divided, leaving the country vulnerable to attack.

The Treaty of Kanagawa was the Commodore’s greatest naval achievement. For Japan, the agreement led to a period of social and political upheaval. Lord Abe resigned his post in 1855 and passed away two years later at the age of 37. Perry died soon after, in 1858. These two leaders changed the course of history for Japan and the United States. Although there were members of the bakufu who had advocated change before Perry’s landing, the opening of Japan created an immediate need for the nation to modernize to protect itself from potential international aggressors. This turn of events ushered in political change, military buildup, and social transformation for the Japanese people that set the nation on a course toward becoming a military and industrial world power. It also opened the door to eastern migration. Growing American industries like the railroads also helped to spur Japanese immigration to Hawaii and California in the late nineteenth century, supplying a pool of cheap immigrant labor.

In 1901, the Japanese government constructed a monument to honor Perry’s memory in the city of Kurihama. Given that his visit had set in motion an imperial rivalry in the Pacific that culminated in World War II, it is not surprising that it was torn down during the war. Still, after Japan’s defeat, the new government restored the monument, and it remains in place today.

1. To which objective of Commodore Perry’s mission did the Japanese agree?

2. Why did the Japanese government agree to any of Commodore Perry’s demands?

“We know that the ancient laws of your imperial majesty’s government do not allow of foreign trade, except with the Chinese and the Dutch; but as the state of the world changes and new governments are formed, it seems to be wise, from time to time, to make new laws.”

President Millard Fillmore, Letter to His Imperial Majesty, the Emperor of Japan, November 13, 1852

This letter was sent to the leader of

This painting illustrates an example of

The events in the photograph resulted most directly from

1. The events depicted reflected a growing belief that

2. The events depicted in the provided image most directly led to

Morison, Samuel Eliot. “Old Bruin”: Commodore Matthew Calbraith Perry, 1794-1858: The American Naval Officer Who Helped Found Liberia, Hunted Pirates in the West Indies, Practised Diplomacy with the Sultan of Turkey And the King of the Two Sicilies; Commanded the Gulf Squadron in the Mexican War, Promoted the Steam Navy and the Shell Gun, And Conducted the Naval Expedition Which Opened Japan. Boston: Little, Brown and Company, 1967.