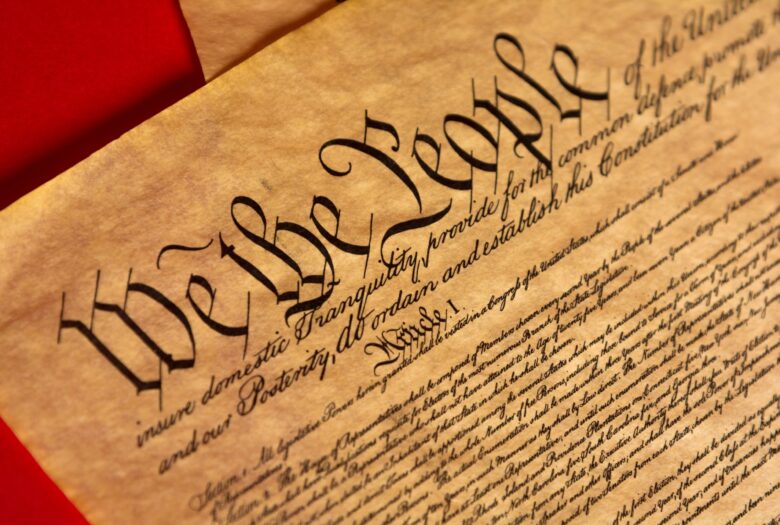 Guiding Questions: How are republican principles of limited government, separation of powers, and checks and balances reflected in the U.S. Constitution?

In 1852, abolitionist Frederick Douglass gave a speech on the meaning of the Fourth of July. He addressed the inequalities and injustices for Black Americans that made them feel they did not belong and had no reason to celebrate the holiday. However, he also stated his belief that the Constitution was “a glorious liberty document.” Douglass believed that the document created a constitutional government with the central purpose of protecting liberty and a free society for all Americans.

The Founders of the Constitution wanted to build a new and enduring representative government based on the authority of the people. Important constitutional principles guided their work at the Constitutional Convention during the summer of 1787. The balancing act of including these principles was difficult but necessary to protect the liberties of the people. Given their assumptions about human nature, and always keeping in mind the ideals of the Declaration of Independence, the Founders created a Constitution rooted in sound principles of government.

The Founders’ understanding of human nature determined the kind of government they created. In Federalist No. 51, James Madison asked, “What is government itself, but the greatest of all reflections on human nature?” The Founders believed that humans were flawed but capable of virtue. Therefore, humans must be allowed to govern themselves, but that government had to be limited and controlled by the people, or liberty would be lost.

The Constitution defines the powers of the national government. Some powers are enumerated powers, or specifically listed. Others are implied powers or not explicitly listed. These are powers that relate to other powers and are therefore implied. For example, the power to raise an army for defense implicitly includes the power to raise an air force. The Founders wanted to strengthen the national government over what existed under the Articles of Confederation, but they also wanted to limit the powers of that government.

Based upon the Enlightenment ideas of John Locke, the Declaration asserted that just governments derive their powers from the consent of the governed and thus laid the basis for American self-government. This is the principle of popular sovereignty, which means the people hold ultimate authority. The authority of the people themselves is the greatest limit on the power of the government. In Federalist No. 39, Madison defined a republic as a government that derives its powers from the people and is governed by representatives elected by the people to serve for a defined period.

The Founders trusted the people and their representatives in the new government but created additional tools to prevent government from amassing too much power. Madison made it clear in Federalist No. 48 that the people cannot rely on mere “parchment barriers,” limits written on paper, to control government. Government is most effectively limited through well-founded institutions. The Founders chose to divide power as the best way to avoid tyranny and to ensure the rights of the people are protected. The Constitution contains many examples of the separation of powers. Each division of government exercises distinct powers to carry out its functions and to prevent the accumulation of power. The Congress is divided into two houses—a House of Representatives and a Senate—in a principle called bicameralism. The national government is divided into three branches with different powers and functions to prevent any one branch from becoming too powerful. A legislature makes the law, an executive enforces the law, and a judiciary interprets the law. Some specific constitutional examples are Congress’s power to declare war, the president’s power to make treaties, and the courts’ power to hear cases resulting from legal disputes. The government is also divided into different levels—national, state, and local—to separate power and limit government. This principle of different levels of government having their respective powers is called federalism.

Another central device limiting the power of the national government is the provision for the three branches to check and balance each other’s powers. The Constitution contains many such examples of checks and balances. Congress may pass a law, but the president has to sign or veto it. The president can make treaties, but the Senate has to ratify them. The Supreme Court can review a congressional law or an executive order. Another example is that the House can impeach a president and the Senate can remove a president from office if found guilty in a trial presided over by the chief justice of the Supreme Court. There are numerous other examples that would make a very long list.

The division of power among different levels of government is called federalism. As Madison described in Federalist No. 39, the Constitution is a mixture of the national and the federal principles. In other words, sometimes the national government has exclusive power, and at other times, the national government shares power with the states. Some examples of federalism from the Constitution include the ratification process for the document itself. The people and their representatives had to decide whether to ratify, or approve, the Constitution in popular ratifying [approving] conventions in the states. The amendment process includes ratification by three-quarters of state legislatures or state conventions. Structuring these processes through the states ensures that approval of and changes to the national government are balanced among the states. Similarly, the Senate equally comprises two senators per state, who were originally elected by state legislatures. The Electoral College gives the states a voice in presidential elections through electors the states choose. These provisions also ensure that though the federal government is supreme, the states have a meaningful role in the system.

In the American federal system, both the national and state governments have sovereignty. In general, the national government is sovereign over national matters, such as national defense, foreign trade, and immigration, while states are sovereign over local matters, including basic rules of public order. As Madison noted in Federalist No. 45, “The powers delegated by the proposed Constitution to the federal government are few and defined. Those which are to remain in the State governments are numerous and indefinite.” In the federal system, the ultimate power to make decisions for the entire nation rests exclusively with the national government, which, when operating under its proper jurisdiction,is supreme in its enumerated powers. Article VI of the Constitution states that the Constitution, all constitutional laws, and all treaties are the supreme law of the land. More generally, the Constitution empowers the national government to govern for the entire nation. It makes the laws for the country. It makes decisions related to war and peace and conducts relations with foreign nations. It regulates trade between the states and settles disputes among them.

American constitutional government is rooted in the ideas of limited government, popular sovereignty, separation of powers, checks and balances, and federalism. These ideas protect the liberties of the people and their right to govern themselves. The Constitution contains words and principles that have the flexibility to respond to centuries of social, economic, and technological change. While the text of the Constitution has words that should be adhered to closely, they are hardly etched in marble. Besides the amendment process that offers a constitutional means of change over time, the American people and their representatives breathe life into the meaning of their Founding documents. They have done so for more than two centuries, through civil dialogue, debate, and deliberation, to reason through the often contested meaning of the Constitution. 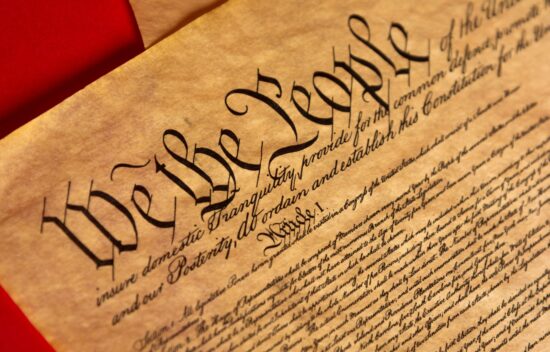 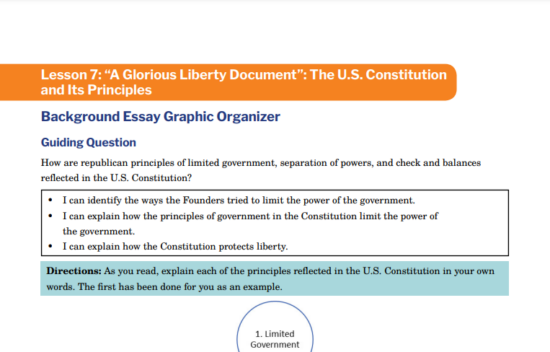 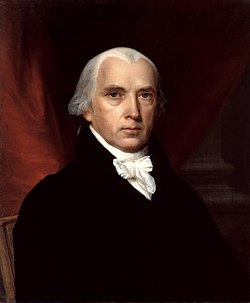 “A Glorious Liberty Document”: The U.S. Constitution and Its Principles

How are the republican principles of limited government, separation of powers, and checks and balances reflected in the U.S. Constitution? 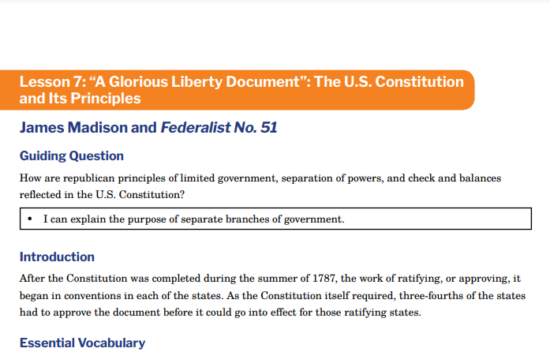 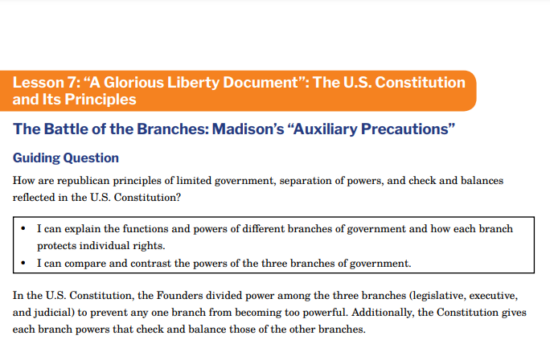