This month we spotlight one of the earliest cases exploring the division between state and federal power: Gibbons v. Ogden (1824). In this Commerce Clause case, the Supreme Court affirmed Congress’s power to regulate interstate commerce, and held that by virtue of the Supremacy Clause, state laws “must yield” to constitutional acts of Congress.

On one side of the river was New York: on the other, New Jersey. Aaron Ogden stood on the New York side and smiled. Ogden had a license from New York to operate on the state’s waterways. Since New York required all out-of-state operators to get expensive permits (protecting Ogden from competition), Ogden figured he would be doing good business. But Gibbons, Ogden’s former business partner, was also a steamboat operator. And Gibbons had a license from the federal government to operate a steamboat through interstate waterways. Ogden and Gibbons each thought his own license should outweigh the other man’s. The case went to the Supreme Court.

The Court had to decide-who had the power to regulate navigation on interstate waterways: Congress, or the individual states? The Court ruled in Gibbons’s favor, holding that the Constitution gave this power to Congress. The opinion, written by Chief Justice John Marshall, focused on the meaning of the Commerce Clause in Article I, Section 8 of the Constitution, which states that Congress has the power “[t]o regulate Commerce with foreign Nations, and among the several States…” The word “among,” the Court ruled, “may very properly be restricted to that commerce which concerns more States than one.”

The Court acknowledged that the Constitution did not expressly grant Congress the power to regulate navigation on interstate waterways. But Marshall pointed out that all the states were connected by waterways and commerce would be impossible without navigating them. Therefore, the power to regulate transporting goods on waterways was “necessary and proper” for Congress to carry out its enumerated power to “regulate commerce…among the several states.”

If individual states had their own rules about commerce with other states, trade would be next to impossible. In fact, one important purpose of replacing the Articles of Confederation had been to “rescue [the United States] from the embarrassing and destructive consequences, resulting from the legislation of so many different States, and to place it under the protection of a uniform law.” States could not set their own rules for commerce in ways would interfere with the national government’s ability to carry out its power to establish uniform rules.

Finally, the decision affirmed that state laws that contradict constitutional acts of Congress “must yield” to the supremacy of the Constitution, as stated in Article VI: “This Constitution and the laws of the United States which shall be made in pursuance thereof … shall be the supreme law of the land.” 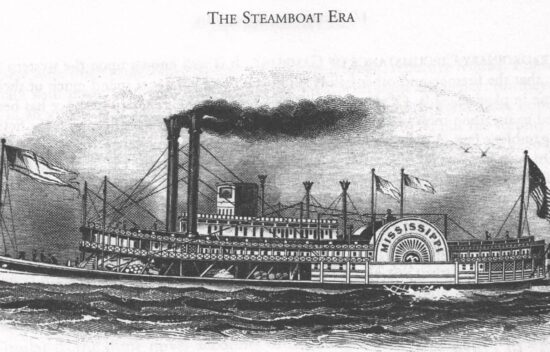 This month we spotlight one of the earliest cases exploring the division between state and federal power: Gibbons v. Ogden (1824). In this Commerce Clause case, the Supreme Court affirmed Congress’s power to regulate interstate commerce, and held that by virtue of the Supremacy Clause, state laws “must yield” to constitutional acts of Congress.