Plessy v. Ferguson and Brown v. Board of Education—were landmark decisions that helped shape race relations in the decades following. How did these cases deal with the constitutional principle of equality? And what can modern Americans learn from these cases to apply to contemporary times?

Handout A: Declaration of Independence Excerpts (1776)

Handout A: Declaration of Independence Excerpts (1776)

We hold these truths to be self-evident, that all men are created equal, that they are endowed by their Creator with certain unalienable Rights, that among these are Life, Liberty and the pursuit of Happiness…

The object of the [Fourteenth] Amendment was undoubtedly to enforce the absolute equality of the two races before the law, but, in the nature of things, it could not have been intended to abolish distinctions based upon color, or to enforce social, as distinguished from political, equality, or a commingling of the two races upon terms unsatisfactory to either. Laws permitting, and even requiring, their separation, in places where they are liable to be brought into contact, do not necessarily imply the inferiority of either race to the other, and have been generally, if not universally, recognized as within the competency of the state legislatures in the exercise of their police power.…

We consider the underlying fallacy of [Plessy’s] argument to consist in the assumption that the enforced separation of the two races stamps the colored race with a badge of inferiority. If this be so, it is not by reason of anything found in the act, but solely because the colored race chooses to put that construction upon it.…

The argument also assumes that social prejudices may be overcome by legislation, and that equal rights cannot be secured to the negro except by an enforced commingling of the two races. We cannot accept this proposition. If the two races are to meet upon terms of social equality, it must be the result of natural affinities, a mutual appreciation of each other’s merits, and a voluntary consent of individuals.…

Legislation is powerless to eradicate racial instincts, or to abolish distinctions based upon physical differences, and the attempt to do so can only result in accentuating the difficulties of the present situation. If the civil and political rights of both races be equal, one cannot be inferior to the other civilly or politically. If one race be inferior to the other socially, the constitution of the United States cannot put them upon the same plane.

The white race deems itself to be the dominant race in this country. And so it is, in prestige, in achievements, in education, in wealth, and in power. So, I doubt not, it will continue to be for all time, if it remains true to its great heritage, and holds fast to the principles of constitutional liberty. But in view of the constitution, in the eye of the law, there is in this country no superior, dominant, ruling class of citizens. There is no caste here. Our constitution is color-blind, and neither knows nor tolerates classes among citizens. In respect of civil rights, all citizens are equal before the law. The humblest is the peer of the most powerful….

Brown v. Board of Education DBQ

In approaching this problem, we cannot turn the clock back to 1868 when the [Fourteenth] Amendment was adopted, or even to 1896 when Plessy v. Ferguson was written. We must consider public education in the light of its full development and its present place in American life throughout the Nation. Only in this way can it be determined if segregation in public schools deprives these plaintiffs of the equal protection of the laws. Today, education is perhaps the most important function of state and local governments…

In these days, it is doubtful that any child may reasonably be expected to succeed in life if he is denied the opportunity of an education. Such an opportunity, where the state has undertaken to provide it, is a right which must be made available to all on equal terms…

To separate [students] from others of similar age and qualifications solely because of their race generates a feeling of inferiority as to their status in the community that may affect their hearts and minds in a way unlikely to ever be undone…Whatever may have been the extent of psychological knowledge at the time of Plessy v. Ferguson, this finding is amply supported by modern authority.…

We conclude that in the field of public education the doctrine of “separate but equal” has no place. Separate educational facilities are inherently unequal. Therefore, we hold that the plaintiffs and others similarly situated…are, by reason of the segregation complained of, deprived of the equal protection of the laws guaranteed by the Fourteenth Amendment.

Think the Vote is a platform that encourages students to engage with each other on current event questions related to constitutional principles and politics. We give away gift cards, BRI swag, and an entrance to win $1,000 to students with the best answers on each side of the weekly debate. This week’s question is: Can Congress Unilaterally Bar an Individual From Holding Public Office Through the Fourteenth Amendment? 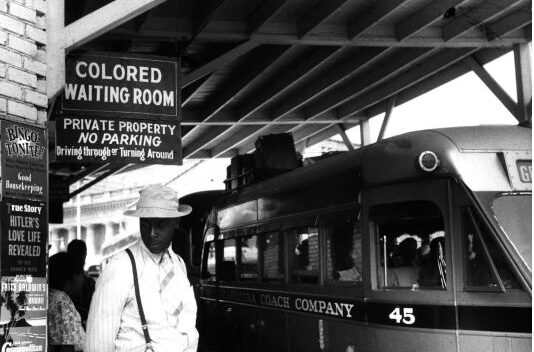 Equality and the Supreme Court: A Primary Source Study of Plessy v. Ferguson and Brown v. Board of Education Answer Key