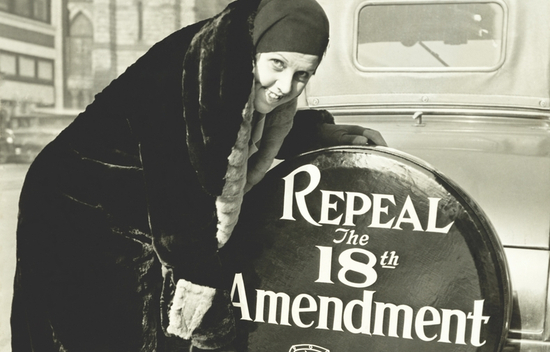 Was prohibition a successful experiment that lowered the amount of alcohol consumed per capita and whose reputation for causing organized crime is greatly exaggerated by popular culture? Or was it a dramatic short-term failure whose regulations were largely evaded, contributed to the rise of organized crime, and failed to stop alcohol consumption in the United States?

Ratification of the Twenty-First Amendment to the Constitution in 1933 repealed the Eighteenth Amendment and ended the federal government’s 14-year quest to prohibit the manufacture, distribution, and sale of alcoholic beverages. Prohibition had become increasingly unpopular after 1925 and even more so with the onset of the Great Depression after 1929. In their effort to undermine support for the “noble experiment,” prohibition’s opponents created two widely accepted myths. One was that prohibition had failed utterly to reduce levels of drinking. The second was that by encouraging bootlegging and an illegal liquor trade, prohibition had incited the creation of organized criminal gangs led by notorious bosses such as Al Capone. These gangs, critics charged, were responsible for a rise in deadly violence such as Chicago’s St. Valentine’s Day Massacre of 1929.

Prohibition was surely losing public support in its final years, but repeal should not be equated with failure. In fact, prohibition achieved significant gains in public health. Furthermore, the claims that it was responsible for creating the business of crime oversimplify the story of the American criminal underworld.

To understand why prohibition was a success, it is important to realize that prior to national prohibition, levels of drinking had been climbing steadily for decades. From 1870 to 1910, annual consumption per capita rose from 1.7 gallons of alcohol to a peak of 2.6 gallons. This increase came about in large part because of the expansion of the brewing industry and the related surge in the number of saloons catering to working-class and immigrant patrons. The broad-based temperance reform movement asserted that these drinking levels were responsible for a host of antisocial consequences such as medical illnesses, premature deaths, alcohol-related psychoses, public drunkenness, worker absenteeism, and family disorder. Prohibition, in short, was a radical answer to a public health challenge in the United States, a country with no national public health system. The Anti-Saloon League and other prohibitionists insisted that only a new legal framework at the national level—rather than piecemeal actions by the states—could change private behaviors and mitigate drinking’s ill effects.

The results proved the prohibitionists right. Prohibition raised the costs of consumption, created legal risks for violators, and, in much of the country, helped create a widely accepted “dry” culture. Consumption of alcohol from 1920 to 1925 fell by 50 to 70 percent, and fell by 30 percent for the entire period of prohibition, which was the steepest decline in the whole of American history. As consumption fell, so did incidence of alcohol-related medical and health issues. Rates of cirrhosis of the liver dropped by 10 to 20 percent, deaths from acute alcoholism fell from 7.3 per 100,000 people in 1907 to 2.5 in 1932, and arrests for public drunkenness and rates of alcoholic psychosis declined as well. And, as the prohibitionists had hoped, wage earners altered patterns of consumption.

Even with prohibition’s repeal, its benefits continued. Consumption levels per capita rose after 1933, but it was another 40 years before they reached pre-prohibition rates. The slow return in drinking levels was rooted at least in part in cultural habits formed between 1920 and 1933 that acknowledged alcohol’s potential ill effects.

Prohibition was a public health triumph. Moreover, its supposed connection to a wave of violence and to forging sophisticated criminal organizations is doubtful. Large-scale bootleggers such as Capone, Johnny Torrio, John Colosimo, and Dean O’Banion had been involved in gambling, prostitution, trafficking in illegal goods, and bribery of police and public officials well before prohibition. With or without the Eighteenth Amendment, their gang-style lawlessness would have continued in the 1920s. Their prohibition-era fame was as much a creation of media sensationalism as it was of their bootlegging operations. There were deadly gun battles, but even these were not always tied to running liquor. For instance, the St. Valentine’s Day massacre, in which seven men were gunned down in a Chicago garage, may have been carried out to avenge an earlier killing and had no connection to Capone or to bootlegging.

Prohibition was a sweeping, drastic answer to public problems rooted in private behaviors. Ultimately, successful though it was, it could not sustain the broad base of support it needed to remain a part of American life, because Americans wanted to exercise personal liberty in deciding whether to drink and the government needed tax revenue from excise taxes during the Depression. The prohibition experiment was soon overturned. Congress passed the Twenty-First Amendment on February 20, 1933, and it was quickly ratified by the states in convention by that December.

Prohibition briefly displaced America’s traditionally decentralized oversight of alcohol consumption by combining nineteenth-century temperance moralism with twentieth-century progressive government regulation. Although prohibition did decrease the amount of alcohol Americans consumed, it failed utterly to stop that consumption. In the attempt, prohibition brought a train of consequences that quickly revealed it as a mistake that should be reversed. One clear measure of prohibition’s failure is that the Eighteenth Amendment (ratified on January 19, 1919) remains the only amendment to have ever been repealed, which occurred when the Twenty-First Amendment was ratified on December 5, 1933—a mere 14 years later.

The conceptualization and implementation of prohibition immediately produced problems. The Eighteenth Amendment outlawed the “manufacture, sale, or transportation of intoxicating liquors,” as well as their importation and exportation, but not their use. Neither did the Volstead Act, the legislation Congress passed to enforce the amendment. Given the year-long delay between the ratification of the amendment and its taking legal effect on January 16, 1920, people had plenty of time (particularly wealthier people) to legally stockpile and then legally drink alcohol after it was prohibited. In addition, the Volstead Act defined “intoxicating liquor” as any beverage with more than 0.5 percent alcohol, effectively outlawing beer and wine. This surprised not only brewers and vintners, whose industries were all but destroyed without compensation, but also many everyday Americans. Many people thought that prohibition would affect only liquor distilleries, as had long been true of many state and local alcohol regulations. Finally, the amendment provided for concurrent enforcement by the federal and state governments. Prohibitionists assumed states would happily take up this considerable burden, which usually proved false. And although the federal government steadily increased funding for enforcement, it was never near enough to have actually ended the manufacture, sale, or importation of alcohol. Thus, the stage was set early for evasion, lax enforcement, and continued drinking.

A fundamental reason for prohibition’s failure was that it introduced into the Constitution—a document designed to establish the structure and relationship of government institutions—what, in essence, was a statute aimed at the personal behavior of individuals. Historically, such regulations, including the regulation of alcohol, had typically been undertaken at the state and local levels (where such regulation was returned after repeal). Consequently, a large portion of the population, perhaps a majority, regarded the one-size-fits-all prohibition of alcohol as unfair, unrealistic, and out of keeping with the customary American approach to the subject. Accordingly, Americans learned the hard way a basic truth about the nature of law: people must obey it of their own accord most of the time because universal enforcement is impossible, especially of an unpopular law. Such a law will be ignored and evaded. This, in turn, will undermine respect for law in general, which is bad for a republic dedicated to the rule of law and government by consent. These effects, along with the corruption and violence that attended the black market production and sale of alcohol, are precisely what occurred during prohibition. Moreover, the malapportionment of representatives in state legislatures favored rural and dry voters, which contributed to the successful ratification of the Eighteenth Amendment.

Large quantities of alcohol were smuggled in from neighboring nations by “bootleggers,” while “speakeasies,” or illegal bars, sprung up nationwide to dispense it. Organized crime took over these operations in several areas, often violently. Al Capone in Chicago was only the most famous face of this development, which prevailed in numerous urban areas. Organized crime further hampered enforcement of prohibition laws because prohibition agents, police officers, and local politicians often took bribes from criminals and then protected their illegal businesses. People routinely manufactured their own alcohol at home and also sold it to friends and neighbors. Those who could afford it got a prescription for “medicinal” alcohol, which was permitted under the Volstead Act. Unsurprisingly, the number of such prescriptions multiplied rapidly.

Although people consumed less alcohol overall, they spent more on it than before prohibition because of relative scarcity and black market pricing. The number of deaths directly traceable to alcohol consumption probably decreased, but the homicide rate shot up because of the violence associated with organized crime. It then decreased quickly upon repeal in 1933. Likewise, consumption of adulterated liquor could be dangerous. Throughout the period, people were poisoned, blinded, and killed by illicit alcohol. At the same time, the number of people incarcerated for violations of the Volstead Act increased so quickly that many jails and federal prisons were overcrowded.

Prohibition had quickly made America into a more corrupt and dangerous place, and the fundamental law of the Constitution was routinely violated and mocked. Americans soon came to their senses and recognized that the many failures of prohibition revealed it as a utopian folly that must be excised from the Constitution.

McGirr, Lisa. The War on Alcohol: Prohibition and the Rise of the American State. New York: W. W. Norton & Company, 2016.