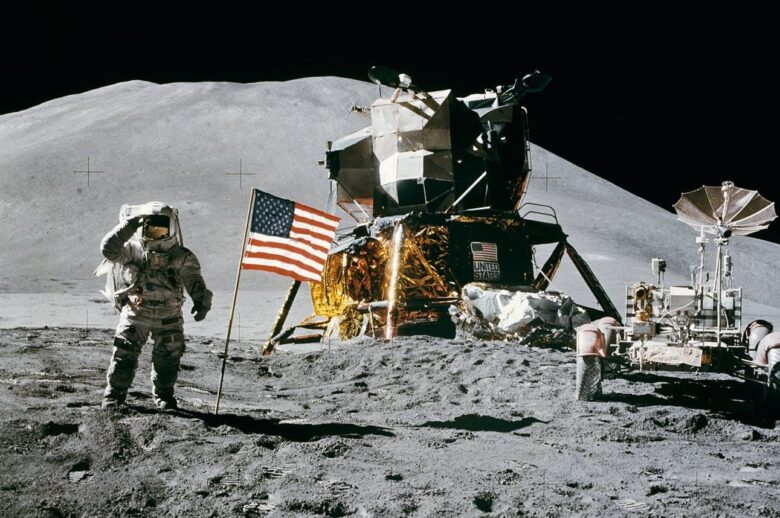 Was the federal spending on the space race justified or was it a misallocation of money that could be better spent elsewhere?

Read the two arguments in response to the question posed, paying close attention to the supporting evidence and reasoning used for each. Then, complete the comparison questions that follow. Note that the arguments in this essay are not the personal views of the scholars but are illustrative of larger historical debates.

Federal spending on the U.S. space program, especially in the 1960s, was considerable and characterized by almost unheard-of rates of growth. Outlays on space and science went from $0 in 1948 to more than $100 million in 1957 and peaking at $7 billion in 1967. Spending did not reach this level again until 1980 and never again in inflation-adjusted terms for the remainder of the Cold War. All told, the United States spent about $30 billion on the space race from the time the Soviet Union launched its Sputnik satellite in 1957 until the moon landing in 1969.

The scientific benefits reaped by the nation since the 1960s are well known. They are concentrated in two large areas: computers and information technology (IT), and biotechnology and medicine. The connection of the great advances made in these fields to the federal space-race effort can easily be overstated. There is a vague general sense that the space race and the U.S. Department of Defense birthed the Internet and inspired the “moon shot” wars on cancer, but in nearly every specific major case, the grounds for this sort of argument are found wanting.

The central illustration of this point can be found in the saga of Intel, the pioneer maker of semiconductors and microchips that opened in 1968 and around which Silicon Valley coalesced. Intel’s chief founder, engineer Robert Noyce, secured several government contracts in the space and defense industries for the initial portion of his career in the late 1950s and early 1960s. His ambition, however, was to break free of the necessity of government contracting to develop breathtaking new technological products people would independently find useful on a mass scale. In pursuit of this objective, he attracted the financier Arthur Rock, the person widely known today as the founder of the venture capital industry. It was venture capital, not the space race, that spawned the computer and IT revolution.

Venture capital was difficult to accumulate in the 1950s and early 1960s because of income-tax rates that reached 91 percent on the highest incomes. The cutting of tax rates by upward of 30 percent in 1964–1965 was central to the accumulation of the myriad capital pools that yielded the great venture firms of the late 1960s, 1970s, and 1980s that spearheaded the technology revolution. Those tax cuts also shook the business model of many of the Fortune 500 companies that had lobbied to stack the tax code with exemptions preferential to themselves and were the principal contractors in the space race. The space race froze in place the business model of the past in which large firms captured the great part of the nation’s engineering talent while the tax cut promoted innovation by enabling the rise of breakaway engineers and venture capital.

It is telling that currently, private sources are at last seeking to make major ventures into space, and that these are captained by Jeff Bezos, founder of Amazon.com and the richest individual in the world. The governmental domination of space exploration so stifled initiative across the private sector with respect to space that it took someone of historically large wealth to take up the challenge of reversing this lamentable development.

The space race was expensive. The Mercury, Gemini, and Apollo projects, which eventually put American astronauts on the moon, cost $25 billion at the time and more than $110 billion when adjusted for inflation. The United States spent more than $200 billion on the space shuttle and another $50 billion on the International Space Station. From its creation in 1958 through 2018, the National Aeronautics and Space Administration (NASA) spent almost one trillion inflation-adjusted dollars. As large as those sums are, however, NASA’s annual spending typically represents a mere 0.5 percent or less of the federal budget. But comparisons offer a perspective raw numbers can obscure. NASA has a larger budget than the National Endowment for the Arts, the National Park Service, or the Smithsonian Institution, yet each year Americans spend twice as much on pizza as they spend on space exploration.

What have taxpayers received for their investment? The benefits have been tangible and intangible. Money spent on space exploration has provided jobs for thousands of scientists, engineers, technicians, construction workers, and clerical workers, and stimulated local economies, especially in areas where NASA has had major facilities, among them Cape Canaveral, Florida; Huntsville, Alabama; and Houston, Texas. More importantly, technological byproducts of the space race have provided innumerable material benefits to society. Satellite technology developed by the space program has produced weather satellites that enable meteorologists to better predict hurricanes. Communications satellites make automatic teller machines possible, allow global positioning systems to work, and let consumers use credit cards at gasoline pumps. The artificial heart pump used by the famed heart surgeon Michael DeBakey was based on the space shuttle’s fuel pump. To reduce the amount of weight booster rockets had to carry into space, scientists and engineers working for NASA perfected the miniaturization of electronic components, making microcomputers and cell phones possible. NASA has patented hundreds of new inventions, and the royalties from NASA patents go directly to the U.S. government.

Other benefits cannot be easily quantified. Many scientists report it was the thrill of space exploration that led them to study physics or astronomy or other sciences. Cold War policy makers considered national prestige a valuable commodity, and once the United States caught up with the Soviet Union in the early 1960s, outer space provided America with a series of propaganda victories, culminating in the 1969 moon landing. In light of the panic that ensued after the Soviets launched their Sputnik satellite and the continued development of the Soviet program, President Dwight D. Eisenhower, and later President John F. Kennedy, probably had to make some commitment to space exploration to reassure the American public. The 1960s, we should not forget, witnessed the assassinations of President Kennedy and his brother, New York Senator Robert Kennedy, and African American leaders Martin Luther King Jr. and Malcolm X, along with violent opposition to the civil rights movement, race riots in America’s cities, a rising crime rate, and a controversial war in Vietnam. The manned space flights of the decade provided Americans with brief respites of national unity and accomplishment.

In later years, the Hubble Space Telescope and other NASA undertakings expanded our knowledge of the material world. The Cosmic Background Explorer, a satellite in orbit from 1989 to 1993, and the unmanned Wilkinson Microwave Anisotropy Probe, which flew from 2001 until 2010, detected heat and background radiation from the Big Bang, giving scientists insights into the origins of the universe.

Admittedly, some of the purported benefits of the space program seem far-fetched or fanciful. Proponents of the International Space Station claimed it would promote world peace. Advocates of continued manned space flight sometimes argue a lunar or Martian colony could provide a refuge for humanity should the Earth become uninhabitable. And some of the intangible consequences of the space program may not have been beneficial. Walter McDougall, in his brilliant and provocative history of the space race, left his readers wondering if America’s successes in outer space had bred an exaggerated faith in science and technology.

A fair assessment of the space program should probably assess separate projects separately. Beyond question, satellites and unmanned space probes generate scientific discoveries more cost effectively than does manned space flight. The space shuttle did not live up to expectations, and two of the five shuttles exploded, killing 14 astronauts. Yet many of the spin-offs from the space program, such as a breathing apparatus for firefighters, came from NASA’s efforts to keep humans alive in space, and manned exploration captured the imagination in a way mechanical devices could not.

Donovan, James. Shoot for the Moon: The Space Race and the Extraordinary Voyage of Apollo 11. New York: Little, Brown and Company, 2019.

McDougall, Walter A. The Heavens and the Earth: A Political History of the Space Age. New York: Basic Books, 1985.