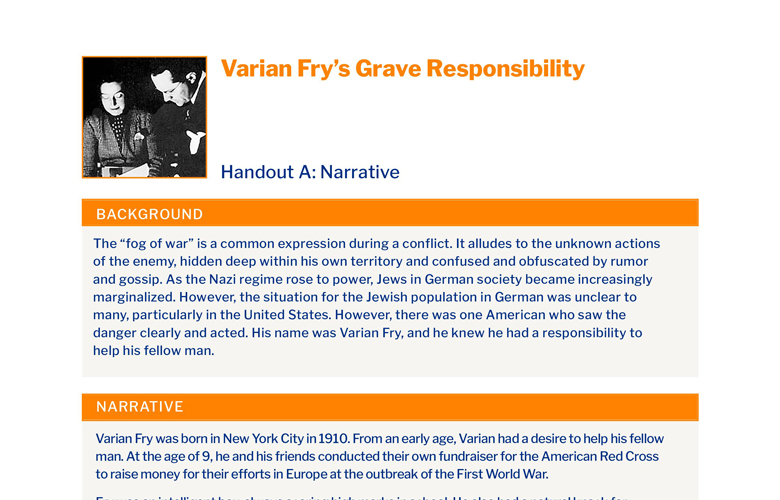 The “fog of war” is a common expression during a conflict. It alludes to the unknown actions of the enemy, hidden deep within his own territory and confused and obfuscated by rumor and gossip. As the Nazi regime rose to power, Jews in German society became increasingly marginalized. However, the situation for the Jewish population in German was unclear to many, particularly in the United States. However, there was one American who saw the danger clearly and acted. His name was Varian Fry, and he knew he had a responsibility to help his fellow man.

Varian Fry was born in New York City in 1910. From an early age, Varian had a desire to help his fellow man. At the age of 9, he and his friends conducted their own fundraiser for the American Red Cross to raise money for their efforts in Europe at the outbreak of the First World War.

Fry was an intelligent boy, always scoring high marks in school. He also had a natural knack for picking up languages. He attended Harvard as an undergraduate and along with fellow students, founded a literary quarterly known as “Hound & Horn.” Upon graduating, he put his literary skills to use and began working as a foreign correspondent.

It was in this role that he first became exposed to the evils of the Nazi regime. On a visit to Berlin in 1935, Fry personally witnessed the abuse that was being leveled against Jews. This turned him into an ardent anti-Nazi.

Jews began to be persecuted in Germany almost from the very beginning of the Nazi Regime. On April 1, 1933, Hitler had passed a national boycott on Jewish business. A few days later, the Nazi government passed a law requiring all “non-Aryan” civil servants to retire. Any person who had even one Jewish parent or grandparent was considered to be non-Aryan. On May 10, 1933, a nationwide book burning was held in an attempt to remove libraries of books considered to be “non-German.” This was little more than an attempt to remove any Jewish influence from German cultural life.

By 1935, when Varian Fry visited Berlin, things had gotten progressively worse. Pressure against Jews to leave the country voluntarily was dramatically stepped up. Jews could be harassed and subjected to violence at any moment. Jewish businesses were also subject to irrational and impossible regulations and standards. Though few could see how far the Nazi’s were willing to go with their hatred toward the Jewish people, the signs were not positive.

In 1938, things got even worse. On November 9, 1938, the infamous Kristallnacht or “night of broken glass” occurred as a string of unchecked violent acts against Jewish shops, synagogues, and property broke out across Germany. Following this night of violence, laws against the Jews became even more strict and irrational.

Varian Fry watched this descent into barbarity from a distance. He did all he could to raise money to support European anti-Nazi movements and wrote books and articles in an attempt to highlight the cruelty of the Nazi regime.

War broke out in 1939 when Germany invaded Poland. What followed was called the “phony war,” a period of months where Germany and Britain sat and waited to see how Germany would move next. In June of 1940, German armor rolled through France. By August, France had surrendered, and Varian Fry had traveled to Marseille to the newly formed Vichy government of unoccupied France. He had by this point become a member of a new organization. Known as the Emergency Rescue Committee, this group was dedicated to helping all those who wished to flee the Nazi regime.

With only $3,000 and a short list of refugees, Fry began hiding those fleeing Nazi oppression and worked to get them exit visas out of the country. Hundreds of artists, musicians, and countless other professions found their way to Fry. With the help of Hiram Bingham IV, Vice Consul in Marseilles, Varian Fry would get the refugees exit visas, assist them on their journey to Spanish or Portuguese borders, and then move them by air or boat to the United States.

Fry and the Emergency Rescue Committee worked tirelessly, obtaining travel documents for thousands upon thousands of refugees. Fry wrote in a letter to his wife,

“Among the people who have come into my office, or with whom I am in constant correspondence, are not only some of the greatest living authors, painters, sculptors of Europe… but also former cabinet members and even prime ministers of half a dozen countries. What a strange place Europe is when men like this are reduced to waiting patiently in the anteroom of a young American of no importance whatever.”

By September of 1941, the pressure had become too great, and Fry was forced to leave. Through his actions, over 2500 people were saved from Nazi oppression. Without his efforts, the beautiful paintings, sculptures, novels, and influence his refugees created after their escape would never have been created.

Varian Fry saw the Nazi regime for the threat to humanity it was. Upon making this discovery, he knew he had a responsibility to help his fellow man and dedicated himself to this cause.