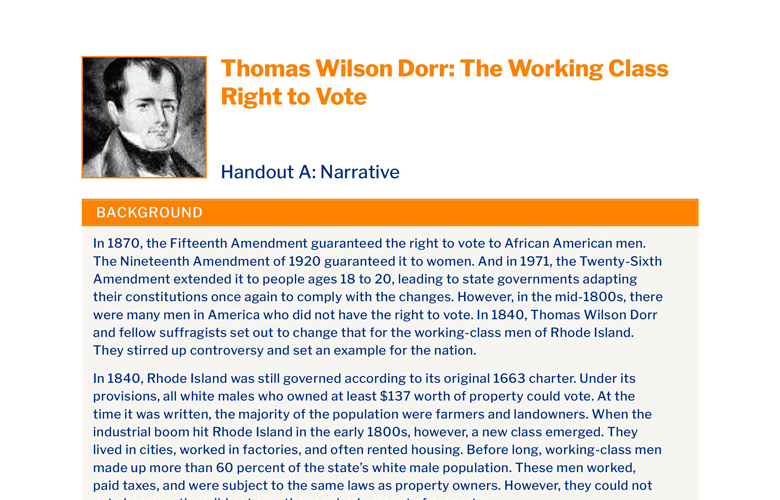 In 1870, the Fifteenth Amendment guaranteed the right to vote to African American men. The Nineteenth Amendment of 1920 guaranteed it to women. And in 1971, the Twenty-Sixth Amendment extended it to people ages 18 to 20, leading to state governments adapting their constitutions once again to comply with the changes. However, in the mid-1800s, there were many men in America who did not have the right to vote. In 1840, Thomas Wilson Dorr and fellow suffragists set out to change that for the working-class men of Rhode Island. They stirred up controversy and set an example for the nation.

In 1840, Rhode Island was still governed according to its original 1663 charter. Under its provisions, all white males who owned at least $137 worth of property could vote. At the time it was written, the majority of the population were farmers and landowners. When the industrial boom hit Rhode Island in the early 1800s, however, a new class emerged. They lived in cities, worked in factories, and often rented housing. Before long, working-class men made up more than 60 percent of the state’s white male population. These men worked, paid taxes, and were subject to the same laws as property owners. However, they could not vote because they did not own the required amount of property.

For political reasons, the legislature refused. The majority of property holders belonged to the Whig Party. Most working-class citizens were Democrats. Afraid that the new working class
would elect members of the opposing party, the legislators balked at their demands. Unable to secure a new constitution from the established legislature, the suffragists decided to create
their own. Dorr and his group of followers formed the People’s Convention to lead the suffragist movement.

Dorr, the eldest of seven children, belonged to one of Rhode Island’s wealthiest families. The
aristocratic lawyer was a great orator who believed in the principle of popular sovereignty—
that the people are the ultimate source of government’s authority. “Rights are the gift of God,” he wrote. “The definition and protection of them are the objects of just government.” He
recruited men from across the state to join his movement. In October 1841, the People’s Convention drafted a new state constitution that would guarantee the voting rights of working
white males.

Rhode Island suddenly had two governments—the official legislature of the 1663 charter, and the new government and constitution approved by a people’s majority. The People’s Convention delegates quickly met; in May of that year, Dorr became governor of Rhode Island and began organizing a new state government. Dorr firmly believed the people have the right to change their government, asserting, “The establishment of any mode of convenience for amending the constitution through the action of the legislature cannot impair the general un-alienated and inalienable right of the People at large to make alterations in their organic laws and any other mode which they deem expedient.”

Whigs in the legislature, now known as the Law and Order Party, publicly declared that Dorr’s government was illegitimate. They elected their own officials under the Freemen’s constitution, including re-electing their governor. They persuaded the rest of the legislature to punish candidates running for office under the People’s Convention.

The conflict in Rhode Island escalated to the point of violent rebellion. On May 18, 1842, the
suffragists attempted to take control of the state arsenal in Providence in order to prevent
the opposing governor’s troops from using the weapons there. Dorr demanded the stored weapons, claiming he was the elected governor of Rhode Island. The guards refused and the Dorrites attacked the arsenal, but their cannons misfired and they were defeated quickly. Dorr fled the state, and his followers were charged with treason. Without its leaders, the extralegal government created by the People’s Convention lost support throughout the state, and the original government regained its political power.

However, the suffragists’ efforts were not in vain. Following the rebellion in 1842, the Law and Order Party proposed a compromise constitution. All native-born, taxpaying, adult males could vote, but not on budgets or taxes. The citizenship requirement continued to prohibit immigrants, mostly Irish Catholics, from voting. Many working-class white males still lacked a voice in financial decisions.

In an 1848 case, the U.S. Supreme Court revisited this episode in Luther v. Borden. The Rhode Island suffragists argued that the state had violated Article Four of the U.S. Constitution, which guarantees “to every State in this Union a Republican Form of Government.” In a republican form of government, citizens are entitled to elect officers and representatives. Those officials are responsible to them, and should govern according to law. Rhode Island, they argued, was was preventing this. Nevertheless, the Court refused to address the issue. They believed it a political question, best left to the executive or legislative branch of the federal government to decide.

Long before young adults, women, and African Americans fought for the right to vote, Thomas Wilson Dorr and the working white men of Rhode Island saw a political imbalance in the voting
system in their state and took the initiative to change it. While their efforts were limited
by a lack of federal support, they demonstrated the lengths to which a group can go to secure
a voice in government. The work of these early Rhode Island suffragists foreshadowed the demand for voting rights by women and freed slaves. The rebellion signaled that the old voting
rules would not stand unchallenged.