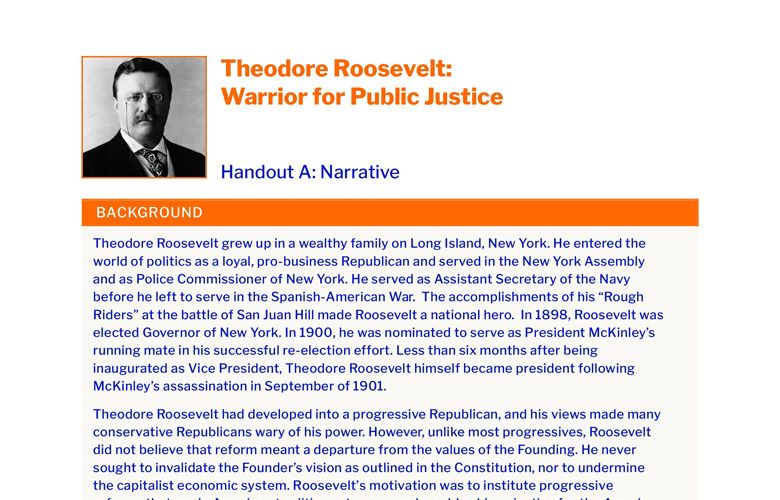 Theodore Roosevelt grew up in a wealthy family on Long Island, New York. He entered the world of politics as a loyal, pro-business Republican and served in the New York Assembly and as Police Commissioner of New York. He served as Assistant Secretary of the Navy before he left to serve in the Spanish-American War. The accomplishments of his “Rough Riders” at the battle of San Juan Hill made Roosevelt a national hero. In 1898, Roosevelt was elected Governor of New York. In 1900, he was nominated to serve as President McKinley’s running mate in his successful re-election effort. Less than six months after being inaugurated as Vice President, Theodore Roosevelt himself became president following McKinley’s assassination in September of 1901.

Theodore Roosevelt had developed into a progressive Republican, and his views made many conservative Republicans wary of his power. However, unlike most progressives, Roosevelt did not believe that reform meant a departure from the values of the Founding. He never sought to invalidate the Founder’s vision as outlined in the Constitution, nor to undermine the capitalist economic system. Roosevelt’s motivation was to institute progressive reforms that made American traditions stronger and would achieve justice for the American people. He also sought to protect the nation from the real danger of radical reform.

Roosevelt respected private property and understood entrepreneurs’ contributions to the prosperity of the United States. However, he had a vision of a new role for the federal government—to increase regulation of business and to protect American workers and consumers. He believed that “where the whole American people are interested, that interest can be guarded effectively only by the National Government.” Roosevelt did not see this as in any way being an unconstitutional interference with private property. As he would describe in his Charter for Democracy Speech:

“In the preamble to the National Constitution, ‘to establish justice’ that is to secure justice as between man and man by means of genuine popular self-government… We are engaged in one of the great battles of the age-long contested war against privileged on behalf of the common welfare.”

One of the most significant battles that Theodore Roosevelt would win in his war for the common welfare was to increase federal inspection of meat packing houses. The questionable practices of large-scale meat packing giants, the so-called “Beef Trust,” first became known to Roosevelt during the Spanish-American War. The Chicago meat packing companies supplied provisions to U.S. Army troops in Cuba, sending canned meat products. The cans contained a visible layer of boric acid that was thought to be a preservative and also helped mask the smell of rotten meat. Many American soldiers derided the product as “embalmed beef” and would not eat it. Teddy Roosevelt would later testify that he would have “eaten his old hat as soon as eat embalmed beef.” However, many soldiers did eat it out of hunger and desperation, sometimes with severe consequences. Scores of soldiers became so ill that they were no longer fit for combat, and many died of food poisoning and dysentery. By some estimates, more soldiers died from embalmed beef than the 379 that fell to Spanish bullets in the war.

The embalmed beef scandal resulted in the Senate creating the Pure Food Investigating Committee. The committee held hearings in Washington, Chicago, and New York. Two generals testified to the effects of embalmed beef as did Theodore Roosevelt. In the end, the committee declared common preservatives such as borax, salicylic acid, and formaldehyde to be “unwholesome,” yet no new laws were passed to regulate meat packing. Secretary of War Russell Alger was forced to resign, but there were no penalties given to the packing companies that had produced the meat.

The issue of the sanitation and safety of the meat packing industry would recapture the public’s attention with the publication of Upton Sinclair’s novel, The Jungle during Roosevelt’s second term in February of 1906. Sinclair’s book told the story of the woes of an immigrant’s plight in America. The book was an effort to gain support for a socialist revolution. Sinclair’s novel became a huge success, not for the 90% of it that was socialist propaganda, but for the 15 pages that told the story of the main character’s experiences working in a meat packing plant in Chicago. Sinclair had gone undercover and worked in a plant, and described in the novel the unsafe and unsanitary conditions he saw. Those conditions shocked and angered the American public.

President Roosevelt had been sent an advance copy of The Jungle, and he was able to anticipate the public reaction successfully. He knew he was going to have to act, but was worried about the source of the shocking facts. He wrote to Secretary of Agriculture James Wilson, stating, “I would like a first-class man to be appointed to meet Sinclair, get the names of the witnesses he suggests, then go to work in the industry…we cannot afford to have anything perfunctory done in this matter.”

Roosevelt was convinced that a conventional investigation would not do the issue justice, and would reveal nothing. Instead, he sent labor commissioner Charles Neil and social worker James Reynolds to work undercover in the meat packing plants of Chicago. Their observations confirmed that all of Sinclair’s charges had been true, if not perhaps understated. With confirmation of the outrages, the President led the effort to have a bill written and passed that would correct the wrongs by regulating the meat packing industry. The Senate’s Agriculture Committee was chaired by Nelson Aldrich, who was a strong opponent of regulation. He warned that it would “undermine the liberty of all people of the United States.” He went on to imply that the bill’s supporters wanted to impose socialism on the American people. However, he bowed to public pressure and allowed the bill out of committee on February 6. The bill quickly passed the whole Senate on February 12, 1906, with only four votes against it. However, it was in the House of Representatives that the bill’s opponents would make their stand.

The Meat Inspection bill was attacked on multiple fronts when it was debated in the House Committee on Agriculture. Some opponents warned that it would put U.S. packers at a competitive disadvantage with Mexican and South American packers who faced no such regulations. Representative E.D. Crumpler of Indiana attacked the bill’s constitutionality, stating,“We have no authority until the meat becomes commerce. You see we have a right to control commerce, but not manufacture…There is not one single thing in the Federal Constitution that expressly confers upon Congress…the power to enact laws for the preservation of the public health.”

Theodore Roosevelt rejected these arguments, arguing, “We are engaged in one of the great battles of the age-long contested war against privileged on behalf of the common welfare.” Roosevelt believed it was within the power of the federal government to promote the common welfare and to establish justice for the American people. Far from the socialist some of his opponents portrayed him as, Roosevelt saw the new Food and Drug Administration as a potential ally to free enterprise. He worried that if the American public lost faith in the great capitalist institutions and the federal government, the U.S. could face social turmoil similar to what Europe was experiencing at the time.

Roosevelt worked behind the scenes to get the House to pass the bill. In a letter to New York Congressman James Wadsworth on March 26, Roosevelt said, “Of course what I am after is not to damage even the packers, still less to the stockmen and farmers. What I want is the immediate betterment of the dreadful conditions that prevail.” Many European nationals had already announced plans to ban imports of U.S. beef after reading The Jungle, and Roosevelt feared releasing the report would be a severe blow to the U.S. cattle industry. He remained determined to pressure Congress to pass the Meat Inspection Act at whatever cost was necessary.

With no action on the bill coming from the House of Representatives, President Roosevelt finally released the full Neill-Reynolds report to Congress, making it public on June 4, 1906. As he expected, it resulted in a tremendous public outcry with nations around the world banning U.S. beef imports. The report caused a huge fall in domestic sales as well.

The public’s anger after reading the Neill-Reynolds report was too much even for the packers’ friends in Congress to resist, and the Meat Inspection Act passed the House of Representatives and was signed into law by Theodore Roosevelt on June 30, 1906.

The law mandated the Department of Agriculture to inspect all cattle, pigs, goats, and horses, both before and after slaughter and processing. It has become one of the most successful and popular federal regulations ever passed. It restored consumer confidence in the meat industry, which achieved tremendous growth and success after its passage. Theodore Roosevelt had fought for justice for consumers and won. At the same time, he was able to foster growth for a vital American industry. He did all of this within the bounds of constitutional power, depriving socialists and other radicals of evidence of the inherent injustice of the capitalist and constitutional order. Roosevelt was able to show that the system worked. Using the tools granted to him by the framers of the Constitution, he was able to address a modern problem, achieve justice, and increase reverence for the republic.