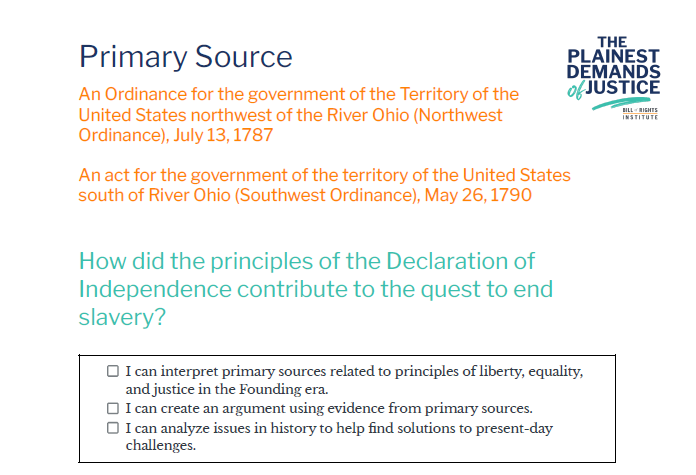 Passed by Congress under the Articles of Confederation, the Northwest Ordinance of 1787 promised republican self-government to the inhabitants of the developing territory lying between the Great Lakes and the Ohio River. This ordinance also set the rules for creating new states. It banned slavery in those states and established the authority for Congress to regulate slavery in the territories. A similar land ordinance or law was passed in 1790 by the first Congress under the U.S. Constitution, for the territory south of the Ohio River that permitted slavery.

An Ordinance for the government of the Territory of the United States northwest of the River Ohio (Northwest Ordinance), July 13, 1787

Art. 2. … No man shall be deprived of his liberty or property, but by the judgment of his peers or the law of the land…

Art. 6. There shall be neither slavery nor involuntary servitude in the said territory, otherwise than in the punishment of crimes whereof the party shall have been duly convicted: Provided, always, That any person escaping into the same, from whom labor or service is lawfully claimed in any one of the original States, such fugitive may be lawfully reclaimed and conveyed [transported] to the person claiming his or her labor or service as aforesaid.

An act for the government of the territory of the United States south of River Ohio (Southwest Ordinance), May 26, 1790

SECTION 1. … the government of the said territory south of the Ohio, shall be similar to that which is now exercised in the territory northwest of the Ohio; except so far as is otherwise provided in the conditions expressed in an act of Congress of the present session, entitled “An act to accept a cession of the claims of the State of North Carolina, to a certain district of western territory.”

Note: “An act to accept a cession of the claims of the State of North Carolina, to a certain district of western territory” was passed by the Congress the prior month and included the following language: