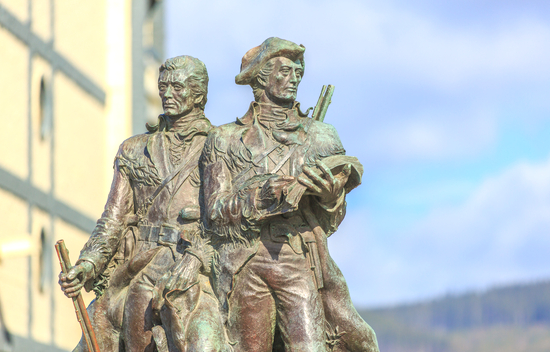 After the acquisition of the Louisiana Territory in 1803, President Thomas Jefferson commissioned the Corps of Discovery, a unit of the U.S. Army. Led by Captain Meriwether Lewis and his friend and fellow soldier, William Clark, the Corps of Discovery departed from St. Louis, Missouri, in May 1804. Lewis, Clark, and other members of the expedition party were eager to explore lands in the newly acquired territory west of the Mississippi River, establish trade relations with local Native American tribes, and document the flora and fauna of the American West. Throughout the course of their two-year journey, Lewis and Clark took detailed notes in a series of journals, which they presented to Jefferson at the conclusion of their expedition and ultimately had published for the general public. The highlighted document is an entry from those journals, in which Clark describes the moment the Corps of Discovery finally glimpsed the Pacific Ocean. In the entry, Clark also provides a detailed description of the party’s interaction with the Wahkiakum people, who resided near what is today the Washington coast.