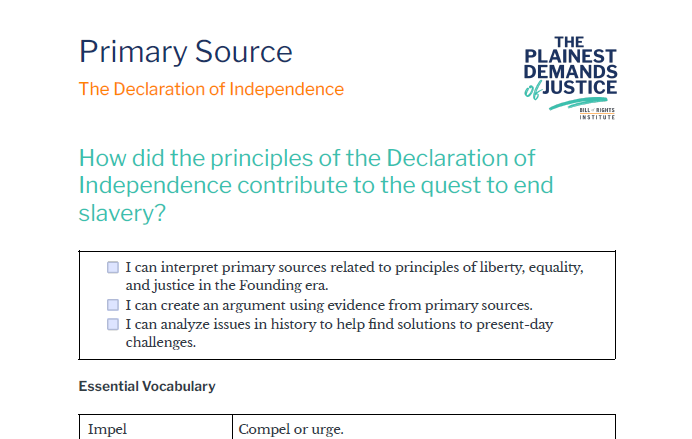 In the years following the Seven Years’ War, the relationship between Great Britain and the North American colonies became strained due to a variety of political and economic factors. Attempts at mediation, including an Olive Branch Petition sent to the king, had been unsuccessful. On June 7, 1776, Richard Henry Lee brought what came to be called the Lee Resolution before the Continental Congress. This resolution stated “these United Colonies are, and of right ought to be, free and independent states …”

Congress debated independence for several days before giving Thomas Jefferson the job of drafting a formal Declaration of Independence. Jefferson’s writing was influenced by George Mason’s Virginia Declaration of Rights, as well as by his study of natural rights theory and the writings of John Locke. Benjamin Franklin and John Adams edited Jefferson’s draft, and the final document was presented to Congress about two weeks later.

The unanimous Declaration of the thirteen united States of America, When in the Course of human events, it becomes necessary for one people to dissolve the political bands which have connected them with another, and to assume among the powers of the earth, the separate and equal station to which the Laws of Nature and of Nature’s God entitle them, a decent respect to the opinions of mankind requires that they should declare the causes which impel [compel or urge] them to the separation.

We hold these truths to be self-evident, that all men are created equal, that they are endowed by their Creator with certain unalienable rights [rights that come from nature and cannot be taken away], that among these are Life, Liberty and the pursuit of Happiness.–That to secure these rights, Governments are instituted among Men, deriving their just powers from the consent of the governed, –That whenever any Form of Government becomes destructive of these ends, it is the Right of the People to alter or to abolish it, and to institute new Government, laying its foundation on such principles and organizing its powers in such form, as to them shall seem most likely to effect their Safety and Happiness.