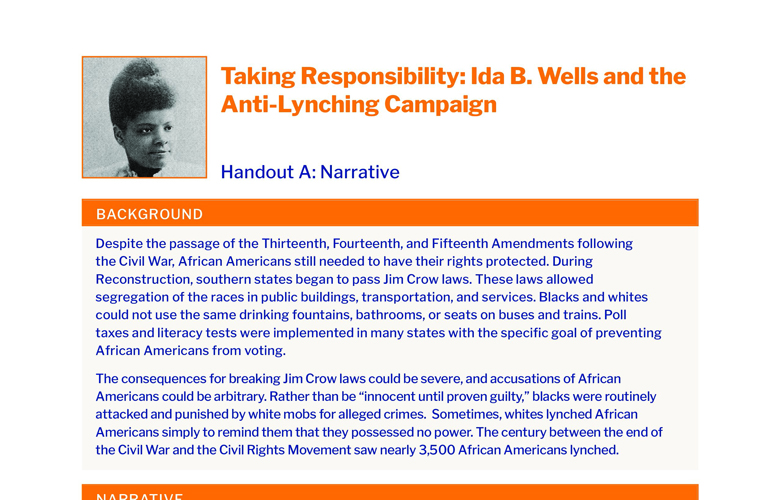 Despite the passage of the Thirteenth, Fourteenth, and Fifteenth Amendments following the Civil War, African Americans still needed to have their rights protected. During Reconstruction, southern states began to pass Jim Crow laws. These laws allowed segregation of the races in public buildings, transportation, and services. Blacks and whites could not use the same drinking fountains, bathrooms, or seats on buses and trains. Poll taxes and literacy tests were implemented in many states with the specific goal of preventing African Americans from voting.

The consequences for breaking Jim Crow laws could be severe, and accusations of African Americans could be arbitrary. Rather than be “innocent until proven guilty,” blacks were routinely attacked and punished by white mobs for alleged crimes. Sometimes, whites lynched African Americans simply to remind them that they possessed no power. The century between the end of the Civil War and the Civil Rights Movement saw nearly 3,500 African Americans lynched.

Ida B. Wells was born a slave in 1862 at the height of the Civil War. After the ratification of the Thirteenth Amendment officially ended slavery in the United States, Ida’s family became active in the Republican Party and the Freedman’s Aid Society. Tragedy struck the Wells family in 1878 when Ida’s parents and one of her brothers died from yellow fever. Ida dropped out of school and took a teaching job in Memphis, Tennessee to help keep her siblings together.

In May 1884, Ida boarded a train to Nashville with a first class ticket, but she was told that she had to sit in the car reserved for African Americans. Ida refused and was forcibly removed from the train. She took her case to court, winning $500 before the Tennessee Supreme Court overturned the verdict.

After this harrowing ordeal, Ida began to write about the discrimination and racism that African Americans faced. She also began to speak out against the deplorable conditions of the segregated school where she taught, resulting in her losing her job.

In 1892, one of Ida’s friends opened a store named People’s Grocery in Memphis. It soon became more successful than the nearby store owned by William Barret, a white man. The two groups of store owners quarreled regularly, and at one point a black worker at People’s Grocery was accused of clubbing Barret. A group of white deputies dressed in civilian clothing entered People’s Grocery in order to arrest the black worker, leading to violence before the men identified themselves as the police. Three black men were arrested for assaulting the officers; before they were given due process, a white mob forcefully removed the men from their jail cells and killed them.

Ida was infuriated by these senseless murders, and she believed it was her responsibility to make sure that more people knew about lynching. She began writing and lecturing against lynching across the country. She wrote two pamphlets entitled Southern Horrors: Lynch Law in All Its Phases and A Red Record in which she examined lynching in depth. Wells traveled to Great Britain to gain support for her movement. In 1898, she went to Washington, D.C. to implore President William McKinley to make reforms against lynching and discrimination.

Ida felt a great responsibility to make sure that the general public—white and black—knew more about lynching in order to end the barbaric practice. She was not afraid to stand up for what she believed despite her gender or race.