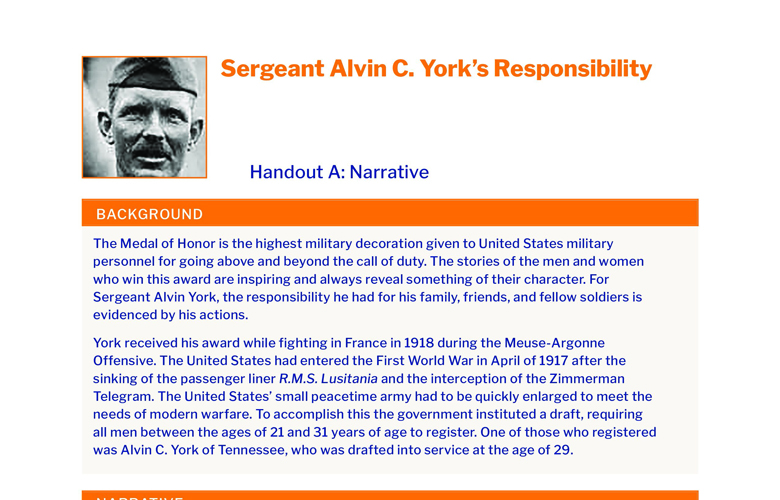 The Medal of Honor is the highest military decoration given to United States military personnel for going above and beyond the call of duty. The stories of the men and women who win this award are inspiring and always reveal something of their character. For Sergeant Alvin York, the responsibility he had for his family, friends, and fellow soldiers is evidenced by his actions.

York received his award while fighting in France in 1918 during the Meuse-Argonne Offensive. The United States had entered the First World War in April of 1917 after the sinking of the passenger liner R.M.S. Lusitania and the interception of the Zimmerman Telegram. The United States’ small peacetime army had to be quickly enlarged to meet the needs of modern warfare. To accomplish this the government instituted a draft, requiring all men between the ages of 21 and 31 years of age to register. One of those who registered was Alvin C. York of Tennessee, who was drafted into service at the age of 29.

Life in rural Tennessee in the early twentieth century was far from easy. To survive, you had to work hard. Alvin C. York was born into this world in December 1887. The third of eleven children, Alvin knew hard work from an early age, and he was driven by a deep sense of responsibility for his family and his community.

Growing up, Alvin was constantly assisting his family. His father, a blacksmith by trade, barely made enough income to get by on. To supplement his work the whole family was engaged in gathering food. Whether working on their small farm or hunting game in the surrounding woods, the York boys were regularly employed providing for the family.

When his father died in 1911, Alvin assumed an even larger role in caring for his family. He was continually moving around looking for work. During this time, he did many jobs ranging from logging to railroad construction to support his family. In 1917, an event occurred that would forever change Alvin York’s life.

On April 6, 1917, the United States declared war on Germany and officially entered the First World War. With the bold proclamation that it would “make the world safe for democracy” and fight a “war to end all wars,” the United States joined the bloody conflict that had been raging across the globe since 1914. The United States quickly threw itself into war preparations, which included raising an army large enough to make an impact on the stalemated Western Front.

To quickly build up its military, the United States’ government instituted a draft for all men between the ages of 21 and 31. On June 5, 1917, at the age of 29, Alvin signed up for the draft. He was eventually drafted into the United States 82nd Infantry division, which was based out of Camp Gordon, Georgia. While there, Alvin battled with his conscience. The church he had grown up in preached pacifism, and he was unsure if he could take part in the fighting. However, after lengthy talks with two of his superior offices and a trip home to sort out his mind, Alvin became dedicated to the cause.

By 1918, York found himself in France fighting in the muddy and blood-soaked trenches of the western front. It was there that he participated in the most significant military operation the United States had undertaken in its short history, the Meuse-Argonne Offensive. The attack, named after the region in France where it took place, was an attempt by the Allies to break the stalemate on the Western front. Since the fall of 1914, the lines of both the German as well as the French and British armies had remained relatively unchanged. Offensive after offensive had failed, leading to years of useless blood and carnage. Now it was the Americans’ turn to shoulder the burden.

The offensive was launched in September 1918. The goal was to break the German hold on Flanders and northern France by breaking through the line and disrupting the railroad network that supplied the enemy trenches. The combined forces of the United States and France massed nearly one million men along the front and prepared to attack. By October, the allies had made slow but steady progress. The 82nd division and York, now a corporal, was charged with plugging a gap that had developed between units in the line. As part of this movement, the 82nd was required to take Hill 223.

While attacking Hill 223, York’s squad came under fire from hidden German machine gun positions high up on a ridge. York and sixteen others set out to clear these nests in order to free up the rest of the attack. They moved to the left of the guns, attempting to outflank them. Slowly, they advanced up the ridge with the wet earth and dead leaves crumbling under their feet. As they reached the top of the ridge, they looked down and discovered they had stumbled upon a German headquarters unit.

Almost immediately, the small unit of Americans came under fire. The first men to be hit were the two sergeants in command of his unit. Suddenly, York found himself in charge. His first thoughts were of his responsibility to protect his men. He knew that he needed to silence the machine guns.

York rolled into a prone position and began to plan out what he would do next. Having no idea exactly how many men lay in front of him, he had to think quickly and carefully. He began by engaging the soldiers further up the hill. Slowly and methodically, he laid down steady fire. His shooting was so effective that the Germans assumed they were facing a much larger force.

As soon as he could, York stood up and advanced toward the German positions. There, he encountered even more Germans. Maintaining his fierce fire, he suppressed these men as well. Finally, a pinned down German called out that if they would stop shooting he could get the rest of the men to surrender. Not wanting any more bloodshed than was necessary, York obliged. The German soldier called out, and soon 132 German soldiers came down the hill and laid down their arms, surrendering to York and his remaining seven men.

For this act of bravery, York was awarded the Congressional Medal of Honor. York, ever the humble man, never saw his action as extraordinary. For him, there had been no other recourse. He knew his responsibility to the men he found himself in command of and he acted accordingly.