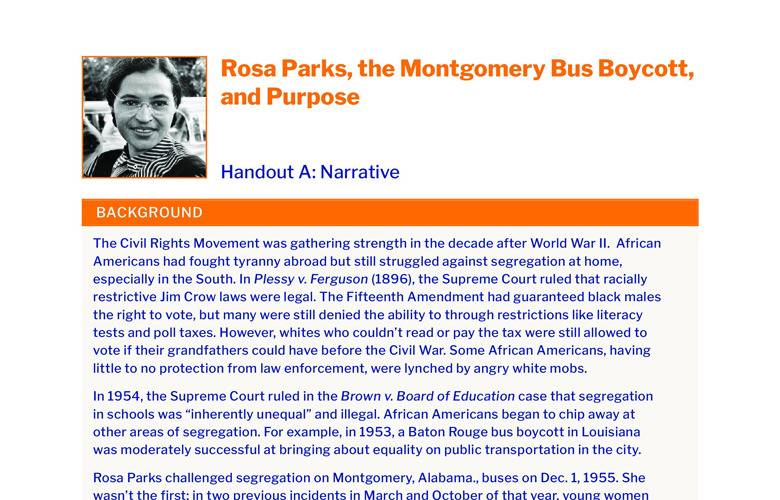 The Civil Rights Movement was gathering strength in the decade after World War II. African Americans had fought tyranny abroad but still struggled against segregation at home, especially in the South. In Plessy v. Ferguson (1896), the Supreme Court ruled that racially restrictive Jim Crow laws were legal. The Fifteenth Amendment had guaranteed black males the right to vote, but many were still denied the ability to through restrictions like literacy tests and poll taxes. However, whites who couldn’t read or pay the tax were still allowed to vote if their grandfathers could have before the Civil War. Some African Americans, having little to no protection from law enforcement, were lynched by angry white mobs.

In 1954, the Supreme Court ruled in the Brown v. Board of Education case that segregation in schools was “inherently unequal” and illegal. African Americans began to chip away at other areas of segregation. For example, in 1953, a Baton Rouge bus boycott in Louisiana was moderately successful at bringing about equality on public transportation in the city.

Rosa Parks challenged segregation on Montgomery, Alabama., buses on Dec. 1, 1955. She wasn’t the first; in two previous incidents in March and October of that year, young women were arrested for not giving up their seat to white people. However, Parks’ refusal to give up her seat spawned a year-long boycott that eventually led to the desegregation of city buses and also focused national attention on civil rights. The boycott also led to increased prominence for the Rev. Martin Luther King Jr., who would help create and lead the Southern Christian Leadership Conference (SCLC), which would inspire civil rights demonstrations in the next decade.

On that winter day in Montgomery, Parks, a seamstress, clocked out of her job at a department store. She boarded a bus and sat behind the “colored” section of the segregated vehicle. The bus stopped a couple of times to pick up passengers, many of whom were white and thus filled the front section. The white bus driver walked back to where she was seated, saying, “Move, y’all, I want those two seats [for a white patron].”

The bus driver, James Blake, had been known to yell racial slurs at black women, carried a weapon, and had humiliated Parks a dozen years before when he threw her off a bus because she entered from the front door, not the back. When she and the other African Americans did not move, he repeated, “Y’all better make it light on yourselves and let me have those seats.” Parks, who’d had years of training in civil rights, said no “There had to be a stopping place, and this seemed to have been the place for me to stop being pushed around and to find out what human rights I had, if any,” Parks later said of the incident.

Parks had grown up in a single-parent household in Tuskegee, Alabama, one of the centers of African-American education in the United States. She had a strong Christian faith and admired black intellectuals and civil rights advocates such as Booker T. Washington and George Washington Carver.

In 1932, she married Raymond Parks, a charter member of the Montgomery chapter of the National Association for the Advancement of Colored People (NAACP). They helped raise money for the Scottsboro Boys, nine young African-American men who were falsely convicted of rape and sentenced to lengthy jail terms.

Parks tried to register to vote unsuccessfully three times before casting her first ballot in 1946. She also acted as secretary of the NAACP Montgomery chapter. During the summer of 1955,
she attended a two-week desegregation workshop with white and black civil rights activists at the Highlander Folk School in Tennessee. For the first time, she saw members of both races learning, talking, and living together “in peace and harmony.” When she returned home, she was impressed by the words of Dr. King, the pastor of Dexter Avenue Baptist Church, where he spoke about Brown v. Board of Education and desegregation.

Parks was arrested after refusing to give up her seat on that day. Her stand inspired other African Americans to take action. Professor Jo Ann Robinson of the Women’s Political Council,
a civil rights group, and some students made 35,000 copies of a flyer calling for a boycott of the Montgomery city buses. Ministers at the city’s historically black churches agreed to discuss the boycott in their Sunday sermons. Organizers also arranged for stories about the boycott in the local papers. One cardboard sign taped to a pole stated, “DON’T RIDE IT FOR FREEDOM.”

Early on Monday morning, Dr. King’s wife, Coretta, called for him to come to a window to see empty buses traveling in the street. African Americans walked to work, rode in black-owned taxis, or carpooled instead of riding segregated buses.

Later that morning, with hundreds of supporters gathering outside city hall, Parks had a short hearing and was fined $10 for violating the law. That night, a pro-boycott meeting drew a crowd to Holt Street Baptist Church. Dr. King was elected leader of the Montgomery Improvement Association, which would organize the boycott.

“We are tired—tired of being segregated and humiliated; tired of being kicked about by the brutal feet of oppression,” King thundered to his fellow activists. “When the history books are written in future generations, the historians will pause and say, ‘There lived a great people — a black people — who injected new meaning and dignity into the veins of civilization.’ That is our challenge and our overwhelming responsibility.”

African Americans made three demands during their boycott:

The city refused, and the Montgomery Bus Boycott lasted 13 months until the following December when the Supreme Court outlawed segregation on buses. Of Parks and her stand for equality, King would later write, “It was an individual expression of a timeless longing for human dignity and freedom. She was anchored to that seat by the accumulated indignities of days gone and the boundless aspirations of generations yet unborn.” Rosa Parks understood that bringing about equality and justice required taking a stand. She fulfilled her purpose that day when she defended not only her own dignity but also the dignity of all African Americans.