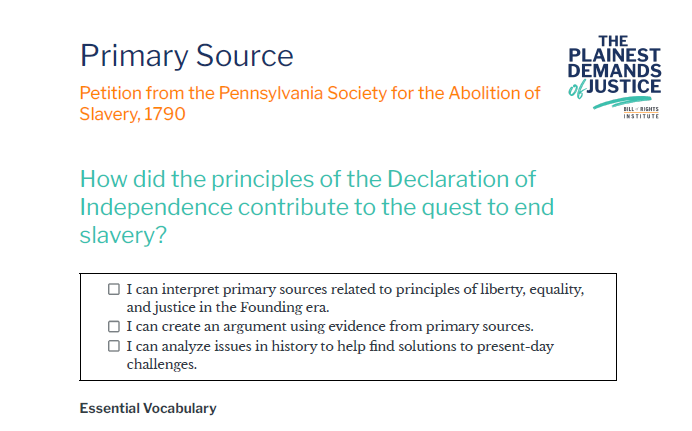 The Pennsylvania Society for the Abolition of Slavery was founded largely by Quakers in 1775. The Quakers were members of a Christian religious group formally known as Religious Society of Friends governed by the Friends General Conference. Many became opponents of slavery because they believed in the equality of all men and women. The Society petitioned the First Congress (1789–1791) to end slavery, calling the institution an “inconsistency” in the American character. The petition was signed by Benjamin Franklin, who served as president of the society. The Senate took no action, however; the House, after bitter debate, also failed to abolish slavery before adjourning in 1791.

Petition from the Pennsylvania Society for the Abolition of Slavery, 1790

That mankind are all formed by the same Almighty being, alike objects of his Care & equally designed for the Enjoyment of Happiness the Christian Religion teaches us to believe & the Political Creed of America fully coincides with the Position. Your  Memorialists  [petitioners], particularly engaged in attending to the Distresses arising from Slavery, believe it their indispensable Duty to present this Subject to your notice. They have observed with great Satisfaction that many important & salutary Powers are vested in you for “promoting the Welfare & Securing the blessings of liberty to the “People of the United States.” And as they conceive, that these blessings ought rightfully to be administered, without distinction of Colour, to all descriptions of People…

From a persuasion that equal liberty was originally the Portion, It is still the Birthright of all men, & influenced by the strong ties of Humanity & the Principles of their Institution, your Memorialists conceive themselves bound to use all justifiable endeavours to loosen the bounds of Slavery and promote a general Enjoyment of the blessings of Freedom. Under these Impressions they earnestly entreat your serious attention to the Subject of Slavery, that you will be pleased to countenance the Restoration of liberty to those unhappy Men, who alone, in this land of Freedom, are degraded into perpetual Bondage, and who, amidst the general Joy of surrounding Freemen, are groaning in Servile Subjection, that you will devise means for removing this Inconsistency from the Character of the American People, that you will promote mercy and Justice towards this distressed Race, & that you will Step to the very verge of the Powers vested in you for discouraging every Species of Traffick in the Persons of our fellow men.

President of the Society