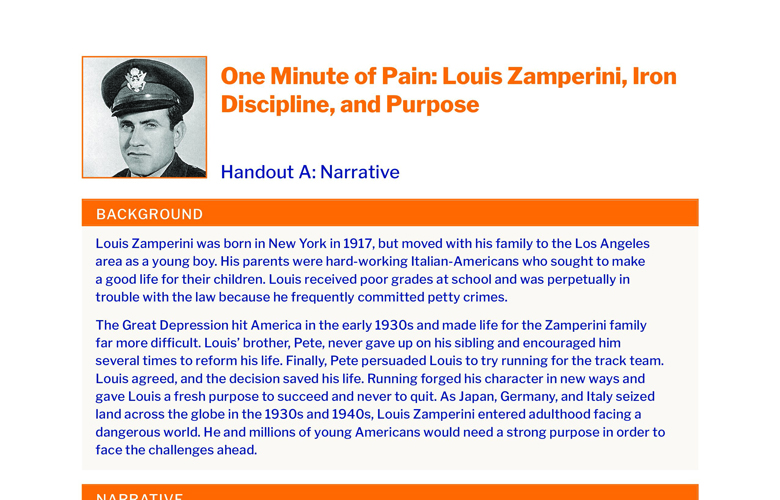 Louis Zamperini was born in New York in 1917, but moved with his family to the Los Angeles area as a young boy. His parents were hard-working Italian-Americans who sought to make a good life for their children. Louis received poor grades at school and was perpetually in trouble with the law because he frequently committed petty crimes.

The Great Depression hit America in the early 1930s and made life for the Zamperini family far more difficult. Louis’ brother, Pete, never gave up on his sibling and encouraged him several times to reform his life. Finally, Pete persuaded Louis to try running for the track team. Louis agreed, and the decision saved his life. Running forged his character in new ways and gave Louis a fresh purpose to succeed and never to quit. As Japan, Germany, and Italy seized land across the globe in the 1930s and 1940s, Louis Zamperini entered adulthood facing a dangerous world. He and millions of young Americans would need a strong purpose in order to face the challenges ahead.

On May 19, 1934, high-school junior Louis Zamperini lined up against the best milers in Southern California under the sweltering sun at the Los Angeles Coliseum. He was anxious about making a good showing against the state record holder. Right before the race, he became scared and started to walk off the track until his coach and his brother, Pete, encouraged him to make the attempt.

The starting gun went off, and the runners jockeyed for position. Zamperini won the race, breaking the World’s Interscholastic Mile record with a time of 4:21.2. It was quite an achievement for a young man who had been a juvenile delinquent and in almost constant trouble with the law. Whenever Zamperini struggled, Pete encouraged him, asking, “Isn’t one minute of pain worth a lifetime of glory?” Zamperini learned about self-discipline and having an iron determination through running. As a result, he practiced diligence in other aspects of his life, especially with his schoolwork. He ran for the University of Southern California and in the 1936 Berlin Olympics, where he placed eighth.

Zamperini’s dream of winning a medal at the 1940 Tokyo Summer Games was shattered when World War II began. When the United States entered the war, the young man served as a bombardier aboard a B-24 bomber in the Pacific theater of war. On May 27, 1943, Zamperini and his crew volunteered to fly a rescue mission to search for a downed plane.

As they flew low over the ocean, one of the plane’s engines died. A second engine on the same wing failed and the propeller stopped spinning. The crew hastily prepared for a crash landing. The B-24 was ripped apart as it smashed into the waves and the crew was flung in every direction. When he floated to the top, Zamperini found only two crewmates—Francis McNamara (“Mac”) and Russell Philips (“Phil”)—alive.

The survivors clambered aboard two rafts and took a quick inventory of their supplies, finding a raft repair kit, a flare gun, dye to alert rescuers, and a mirror. They also found eight half-pints of water and six fortified chocolate bars. Although their chances of survival while floating on the expansive Pacific were extremely low, Zamperini later wrote, “I felt so fortunate to be alive that I was actually happy.” Zamperini reached inside and found his steely determination that could carry him through any difficulty. “I was raised to face challenges,” he later stated.

Even though Mac selfishly ate all of the chocolate that night, Zamperini reported, “I couldn’t let it throw me.” They drifted for days with little relief from the sun that blistered their skin and the waves that produced salt sores on their bodies. They fought off sharks that circled them relentlessly and lived off whatever rainwater fell. The men ate fish, birds, and a couple of bloody livers from smaller sharks they captured. All of the meat was eaten raw. They played brain games to keep their minds sharp, fought off hallucinations, and dreamed of a real meal back home. Nearstarvation caused them to lose much of their body weight.

Zamperini had not been a particularly religious young man, but turned to faith to bolster his sense of purpose. “I promise if I get home through all this and whatever is to come, I’ll serve you for the rest of my life,” he resolved as he looked to the heavens.

If their struggle against nature were not enough, one day a Japanese Zero fighter plane strafed the water around the survivors. One raft was sunk, but none of the emaciated men were shot. Only a week later, Mac finally succumbed to the ordeal and quietly perished. Zamperini and Phil buried him at sea. On the forty-seventh day of drifting, the pair was captured by a Japanese patrol boat and taken as prisoners of war.

The two American POWs were held for forty days at the Kwajalein Island prison camp. They were
confined inside a six-by-six-foot box and routinely taken out for interrogations during which time they were physically and mentally tortured. They suffered disease and ate disgusting rations that were barely edible.

Zamperini then spent a year at Ofuna prison camp where he and the prisoners from a variety of American allies suffered abuse at the hands of sadistic guards. They were given maggot-filled fish and watery soup to eat, causing them to be malnourished and suffer a variety of maladies. When he was transferred a year later to Omori in Tokyo, Zamperini was immediately singled out for abuse by the malicious head of the camp, Matsuhiro Watanabe, nicknamed “The Bird” by the prisoners. Watanabe beat Zamperini into unconsciousness daily with his fists, a wooden cane, and a steel belt buckle. He forced the scores of imprisoned men to punch Zamperini. Still, the tenacious young men refused to be have his soul crushed and dug deep into his last reserves of strength and determination.

Once his Olympic fame was recognized, Radio Tokyo offered Zamperini an opportunity to tell his family he was alive. The only catch was that he would have to read a broadcast of Japanese propaganda against America. The POW refused.

Zamperini could not describe his relief and joy when Watanabe was transferred to another camp, and the abuse decreased. However, on March 1, 1945, he and other prisoners were transferred to a camp in Naoetsu. Zamperini was devastated when he saw the Bird come out of his office to address the new prisoners. “I felt my knees buckle and my heart collapse,” Zamperini later wrote, “Inside I gave up all hope.” He felt his purpose and his life ebb away.

However, Zamperini continued to endure the fresh wave of beatings and half-rations. The war ended in August and the prisoners were released, mere shadows of their former selves. Zamperini had survived several incredible ordeals because of Pete’s lessons on determination. It helped him in running in the Olympics, surviving a plane crash, floating on the Pacific for seven weeks, and enduring the horrors of a Japanese prisoner camp. He also had the strength and determination to keep his promise to God and became a renowned Christian speaker, win a bout with alcoholism caused by Post-Traumatic Stress Disorder, and forgive his Japanese tormentors in the decades after the war.