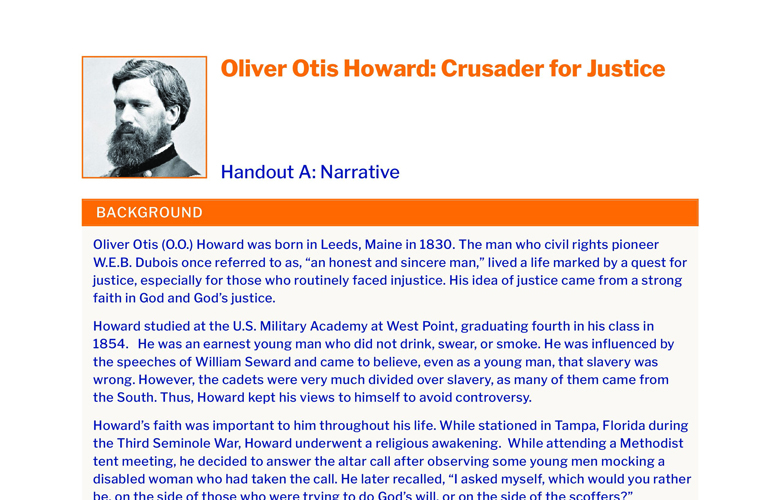 Oliver Otis (O.O.) Howard was born in Leeds, Maine in 1830. The man who civil rights pioneer W.E.B. Dubois once referred to as, “an honest and sincere man,” lived a life marked by a quest for justice, especially for those who routinely faced injustice. His idea of justice came from a strong faith in God and God’s justice.

Howard studied at the U.S. Military Academy at West Point, graduating fourth in his class in 1854. He was an earnest young man who did not drink, swear, or smoke. He was influenced by the speeches of William Seward and came to believe, even as a young man, that slavery was wrong. However, the cadets were very much divided over slavery, as many of them came from the South. Thus, Howard kept his views to himself to avoid controversy.

Howard’s faith was important to him throughout his life. While stationed in Tampa, Florida during the Third Seminole War, Howard underwent a religious awakening. While attending a Methodist tent meeting, he decided to answer the altar call after observing some young men mocking a disabled woman who had taken the call. He later recalled, “I asked myself, which would you rather be, on the side of those who were trying to do God’s will, or on the side of the scoffers?”

His increased faith led to a strong belief that the institution of slavery was unjust. Howard would refer to slavery as a “gigantic evil” and could not understand how anyone could support it. He believed it was impossible to reconcile Christianity and slavery, stating, “I do not learn in any of the Commandments or in the Gospel of Christ, that black men are excepted…As Christians our first duty towards them is to recognize their manhood.”

Upon his return from Florida, he considered the ministry but instead took a position teaching math at West Point. At the outbreak of the Civil War, Howard accepted a commission as a colonel in a Maine militia and saw a great deal of action. He was wounded at the Battle of Seven Pines, leading to the loss of his right arm. His valor in that battle would be recognized some thirty years later with the Medal of Honor. When later reflecting on the loss of his arm, he believed it to be a worthy sacrifice, stating, “Whenever I feel a returning throb from an old wound, I thank God I lost what I did in procurement of practical liberty. I thank God it was done in opening up a chance for the colored people.”

After a three-month recuperation, he was promoted to Brigadier General in the fall of 1861. Howard went on to serve in many of the major battles of the war and in all three major theatres. During the Atlanta, Georgia, and Carolinas campaigns, Howard became part of General William T. Sherman’s inner circle. Sherman valued his expertise as an administrator and organizer for the Army. It was while in Georgia that Howard first observed what would come to define his postwar life, the attempt to educate former slaves.

Following the end of the Civil War, O.O. Howard was named commissioner of the new Freedmen’s Bureau, whose mission was to provide aid and justice to former slaves and to help rebuild the American republic. It would become, in Howard’s words, “A struggle for what I have called the manhood of the black man in labor, justice, suffrage, and the schools.” Howard’s quest for justice sprung from his faith, but also from his belief in the American Founding as the best chance for man to see justice on Earth. He recognized that in 1865, the ideals of the Declaration of Independence and the American Revolution had not yet been realized, but their goals gave him hope and optimism.

Howard’s reputation as a war hero and as a humanitarian made him a logical choice to lead this crusade for justice. It required a herculean effort and would not always be successful. However, it was, as W.E.B. Dubois reflected in 1901, “One of the most singular and interesting of the attempts made by a great nation to grapple with the vast problems of race and social condition.”

Under O.O. Howard’s leadership, the Freedmen’s Bureau divided the slave states into ten districts and sought to re-establish constitutional order. Theirs was an attempt to make a more perfect union, to establish justice for the freedmen, and to provide for their general welfare. Howard looked to truly secure the blessings of liberty.

Howard faced the challenge of integrating four million former slaves into southern society. He believed that humanitarian assistance could help uplift these people. The first order was to provide basic needs, and both former slaves and white refugees received trainloads of food and clothes. Between its founding in 1865 and 1869, the Freedmen’s Bureau distributed some 21 million meals at a cost of over $4 million. By June 1869, the Bureau’s doctors and surgeons had treated over half a million patients.

O.O. Howard’s Freedmen’s Bureau also set up informal tribunals to assist with legal matters, as the southern courts refused to allow sworn testimony from blacks. The Bureau solved civil issues for African Americans when they were discriminated against by whites. It issued hundreds of marriage certificates for black couples between 1861 and 1869, helping correct one of the many injustices of slavery.

The Bureau was able to successfully resolve issues of back pay for black soldiers who had served in the Union Army. They were able to distribute over eight million dollars to over five thousand claimants, both giving those men their just rewards for their service and helping many families get a foothold in society.

However, Howard was not without opposition. President Andrew Johnson became an enemy of the Freedmen’s Bureau from the start of its creation. This was a result of the executive’s constant struggle over funding for the Freedmen’s Bureau with the “Radical Republicans” in Congress, who sought to punish the South for slavery and the war. Some criticized Howard for lack of attention to administrative detail, but he thought it was most important to travel throughout the South to get a sense of problems, observe progress, and explain to people what goals they were trying to accomplish. He lamented in 1866 that many southern whites did whatever they could to stop the bureau. These whites, as Howard saw it, acted against their long-term interest, as justice for blacks was necessary for there to be justice for all.

With forces working against him, Howard was determined to make the most of his opportunity while he could. In its first six years, the Freedmen’s Bureau spent over five million dollars on education. Howard made elementary education a priority, building over a thousand schools and staffing them with qualified instructors. By 1870, there were over 150,000 children enrolled in schools founded by the Freedmen’s Bureau.

In addition to elementary education, the Bureau worked on vocational training and higher education. Howard University in Washington, D.C., named for Oliver Howard, was founded to train the nation’s black lawyers, doctors, dentists, and teachers. Most of the major traditionally black universities, such as Howard, Hampton, and Fisk, can trace their roots back to the Freedmen’s Bureau. Howard worked tirelessly for justice through education. In a letter in 1873, Frederick Douglass remembered that on one Fourth of July, he and Oliver Howard were the only members of the Howard University Board of Trustees to show up for a scheduled meeting.

Howard’s time with the Freedmen’s Bureau ended in 1874, when he was transferred to a command in the West during the Indian Wars. However, he never lost his reputation as an advocate for education. In 1882, despite having never met him, Booker T. Washington wrote to Howard, asking him to serve on the Board of Trustees for his new Tuskegee Institute in Alabama. Washington wrote, “My boldness in writing you is that I believe you are the one to do us good.”

After serving in various commands, Howard’s military career came to a close with his retirement in 1894. However, it didn’t end his crusade of fighting for justice through education. In June of 1896, the Reverend A.A. Myers convinced Howard to help him raise money for a new college in the Cumberland Gap area of Kentucky. Howard used his connections to raise thousands of dollars for the school, which had its charter issued in 1897. In 1899, Howard was elected as President of its Board of Trustees.

Oliver Otis Howard lived a life devoted to justice. He helped save the republic with his heroism and worked to secure the blessings of its liberty to all Americans. In 1866, in the early days of the Freedmen’s Bureau, Howard was able to get a sense of the work his life would come to be defined by when he stated, “I hope I may be permitted to live to a good old age…That I may tell my children’s children of the times when the American people put forth their strength, saved a Republic, broke the chains of four million slaves, and inaugurated genuine, universal, unqualified liberty.”