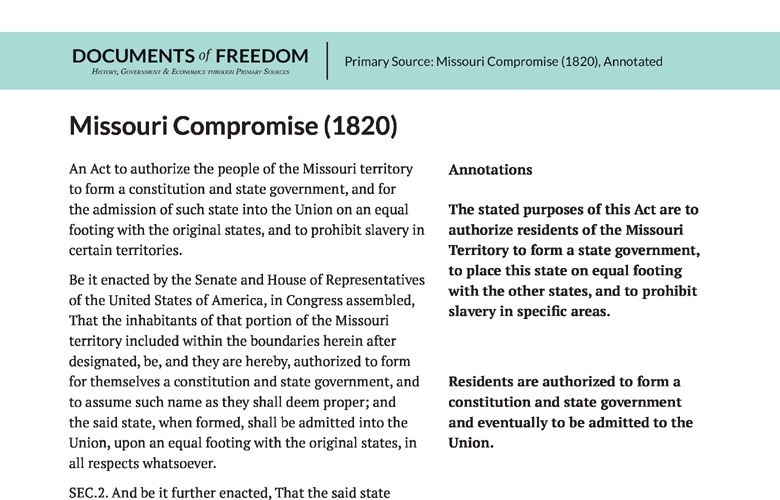 An Act to authorize the people of the Missouri territory to form a constitution and state government, and for the admission of such state into the Union on an equal footing with the original states, and to prohibit slavery in certain territories.1

Be it enacted by the Senate and House of Representatives of the United States of America, in Congress assembled, That the inhabitants of that portion of the Missouri territory included within the boundaries herein after designated, be, and they are hereby, authorized to form for themselves a constitution and state government, and to assume such name as they shall deem proper; and the said state, when formed, shall be admitted into the Union, upon an equal footing with the original states, in all respects whatsoever.2

SEC. 3. And be it further enacted, That all free white male citizens of the United States, who shall have arrived at the age of twenty-one years, and have resided in said territory: three months previous to the day of election, and all other persons qualified to vote for representatives to the general assembly of the said territory, shall be qualified to be elected and they are hereby qualified and authorized to vote, and choose representatives to form a convention,5 who shall be apportioned amongst the several counties as follows:

And the election for the representatives aforesaid shall be holden on the first Monday, and two succeeding days of May next, throughout the several counties aforesaid in the said territory, and shall be, in every respect, held and conducted in the same manner, and under the same regulations as is prescribed by the laws of the said territory regulating elections therein for members of the general assembly, except that the returns of the election in that portion of Lawrence county included in the boundaries aforesaid, shall be made to the county of Wayne, as is provided in other cases under the laws of said territory.7

SEC. 4. And be it further enacted, That the members of the convention thus duly elected, shall be, and they are hereby authorized to meet at the seat of government of said territory on the second Monday of the month of June next; and the said convention, when so assembled, shall have power and authority to adjourn to any other place in the said territory, which to them shall seem best for the convenient transaction of their business; and which convention, when so met, shall first determine by a majority of the whole number elected, whether it be, or be not, expedient at that time to form a constitution and state government for the people within the said territory, as included within the boundaries above designated;8 and if it be deemed expedient, the convention shall be, and hereby is, authorized to form a constitution and state government; or, if it be deemed more expedient, the said convention shall provide by ordinance for electing representatives to form a constitution or frame of government; which said representatives shall be chosen in such manner, and in such proportion as they shall designate; and shall meet at such time and place as shall be prescribed by the said ordinance; and shall then form for the people of said territory, within the boundaries aforesaid, a constitution and state government:9 Provided, That the same, whenever formed, shall be republican, and not repugnant to the constitution of the United States; and that the legislature of said state shall never interfere with the primary disposal of the soil by the United States, nor with any regulations Congress may find necessary for securing the title in such soil to the bona fide purchasers; and that no tax shall be imposed on lands the property of the United States; and in no case shall non-resident proprietors be taxed higher than residents.10

SEC. 5. And be it further enacted, That until the next general census shall be taken, the said state shall be entitled to one representative in the House of Representatives of the United States.11

SEC. 6. And be it further enacted, That the following propositions be, and the same are hereby, offered to the convention of the said territory of Missouri, when formed, for their free acceptance or rejection, which, if accepted by the convention, shall be obligatory upon the United States:

First. That section numbered sixteen in every township, and when such section has been sold, or otherwise disposed of, other lands equivalent thereto, and as contiguous as may be, shall be granted to the state for the use of the inhabitants of such township, for the use of schools.12

Second. That all salt springs, not exceeding twelve in number, with six sections of land adjoining to each, shall be granted to the said state for the use of said state, the same to be selected by the legislature of the said state, on or before the first day of January, in the year one thousand eight hundred and twenty-five; and the same, when so selected, to be used under such terms, conditions, and regulations, as the legislature of said state shall direct:13 Provided, That no salt spring, the right whereof now is, or hereafter shall be, confirmed or adjudged to any individual or individuals, shall, by this section, be granted to the said state:14 And provided also, That the legislature shall never sell or lease the same, at anyone time, for a longer period than ten years, without the consent of Congress.

Third. That five per cent. of the net proceeds of the sale of lands lying within the said territory or state, and which shall be sold by Congress, from and after the first day of January next, after deducting all expenses incident to the same, shall be reserved for making public roads and canals, of which three fifths shall be applied to those objects within the state, under the direction of the legislature thereof; and the other two fifths in defraying, under the direction of Congress, the expenses to be incurred in making of a road or roads, canal or canals, leading to the said state.15

Fourth. That four entire sections of land be, and the same are hereby, granted to the said state, for the purpose of fixing their seat of government thereon;16 which said sections shall, under the direction of the legislature of said state, be located, as near as may be, in one body, at any time, in such townships and ranges as the legislature aforesaid may select, on any of the public lands of the United States: Provided, That such locations shall be made prior to the public sale of the lands of the United States surrounding such location.

Fifth. That thirty-six sections, or one entire township, which shall be designated by the President of the United States, together with the other lands heretofore reserved for that purpose, shall be reserved for the use of a seminary of learning,17 and vested in the legislature of said state, to be appropriated solely to the use of such seminary by the said legislature:18 Provided, That the five foregoing propositions herein offered, are on the condition that the convention of the said state shall provide, by an ordinance, irrevocable without the consent or the United States, that every and each tract of land sold by the United States, from and after the first day of January next, shall remain exempt from any tax laid by order or under the authority of the state, whether for state, county, or township, or any other purpose whatever, for the term of five years from and after the day of sale; And further, That the bounty lands19 granted, or hereafter to be granted, for military services during the late war, shall, while they continue to be held by the patentees, or their heirs remain exempt as aforesaid from taxation for the term of three years; from and after the date of the patents respectively.20

SEC. 7. And be it further enacted, That in case a constitution and state government shall be formed for the people of the said territory of Missouri, the said convention or representatives, as soon thereafter as may be, shall cause a true and attested copy of such constitution or frame of state government, as shall be formed or provided, to be transmitted to Congress.

SEC. 8. And be it further enacted. That in all that territory ceded by France to the United States, under the name of Louisiana, which lies north of thirty-six degrees and thirty minutes north latitude, not included within the limits of the state, contemplated by this act, slavery and involuntary servitude, otherwise than in the punishment of crimes, whereof the parties shall have been duly convicted, shall be, and is hereby, forever prohibited:21 Provided always, That any person escaping into the same, from whom labour or service is lawfully claimed, in any state or territory of the United States, such fugitive may be lawfully reclaimed and conveyed to the person claiming his or her labour or service as aforesaid.22

1The stated purposes of this Act are to authorize residents of the Missouri Territory to form a state government, to place this state on equal footing with the other states, and to prohibit slavery in specific areas.

2Residents are authorized to form a constitution and state government and eventually to be admitted to the Union.

3The Act includes a specific description of the territory’s boundaries. The areas described are noted on the map below.

4The state will control the Mississippi and other bordering rivers. The rivers will be “common highways.”

5Free white male U.S. citizens age 21 or older are authorized to vote and to be elected.

6Representatives from each county are apportioned and listed.

7The Act states when and how elections will be held.

8The convention is authorized to form a constitution.

10The form of government must be representative and must abide by the U.S. Constitution.

11Until the next census is taken, a newly-formed state will have one representative in Congress.

12A portion of every township must be used for schools.

13Salt springs, also known as brine springs, were a source of salt production. Salt was vital to food preservation and public health and, thus, to trade.

14Salt springs must be given over to state use.

15When Congress sells territorial lands, a portion of proceeds must be reserved to pay for construction of public roads and canals.

16Land must be set aside for the purpose of providing a seat of state government.

17A seminary is a secondary or postsecondary school (or college) in which theology is studied, usually for the purpose of becoming ordained as a member of the clergy.

18Land must be set aside for seminaries.

19Bounty lands were sections of land given by the government as compensation for service in times of war.

20Land grants to those who served in the Revolution, and their heirs, are exempt from taxes for three years.

21Slavery is prohibited in the Louisiana Territory.

22People who escape from slavery into Louisiana Territory may be legally reclaimed by their slaveholders.