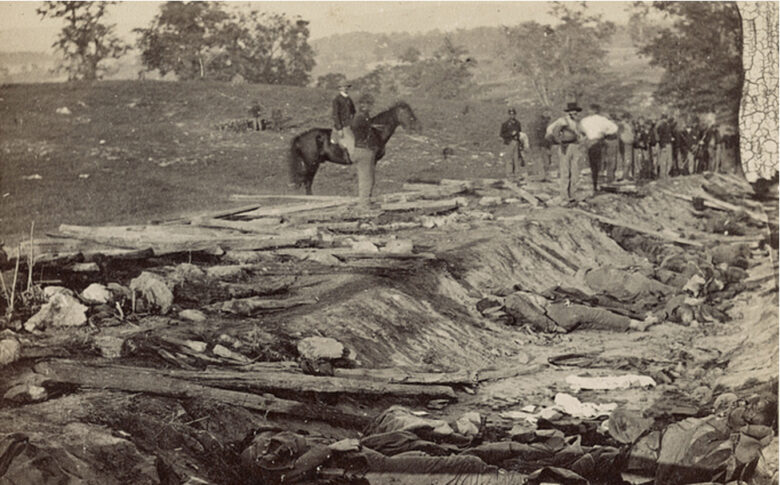 Mathew Brady was a New York photo journalist, best known for his collection of photography documenting the Civil War. Commonly referred to as the “father of photojournalism,” Brady studied under Samuel F. B. Morse and opened his own photography studios in New York and Washington DC, where he took photographs of prominent Americans of the time, including Daniel Webster, Henry Clay, and John James Audubon. Once the Civil War began, he began marketing cartes de visite (small photographs the size of a business card) to parents of departing soldiers so they could have images to keep of their sons while they were off at war. Brady soon decided to document the war and, with permission from President Lincoln, he organized and self-financed a team of photographers who took thousands of photographs documenting camp life and battlefield scenes. One of these photographers on Brady’s team, Alexander Gardner, took all the photographs featured. In 1862, Brady’s exhibit The Dead of Antietam showed the public the first ever photographs of a battlefield before the dead had been removed. These images received extensive media attention, with the New York Times saying, “Mr. Brady has done something to bring home to us the terrible reality and earnestness of war.”

Photo 1. Confederate dead at Bloody Lane, looking northeast from the south bank. The group of Union soldiers looking on were likely members of the 130th Pennsylvania, who were assigned burial detail on September 19th. This image was taken by Alexander Gardner two days after the Battle of Antietam.

Photo 2. Alexander Gardner captured this image of General McClellan and President Lincoln at McClellan’s headquarters on October 4, 1862. Note the American flag on the table behind Lincoln and the captured Confederate battle flag on the ground.

Photo 3. Gardner took this image of Confederate wounded at Smith’s Barn, with Dr. Anson Hurd, 14th Indiana Volunteers, in attendance. The hospital was located in the vicinity of Keedysville, Maryland.