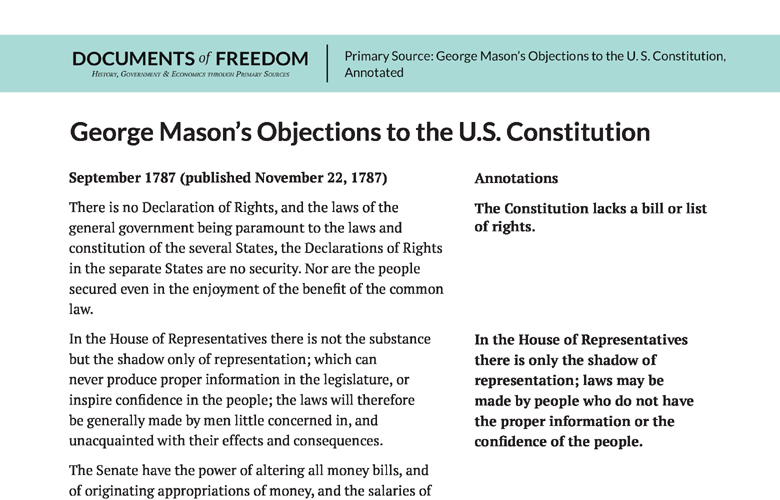 There is no Declaration of Rights, and the laws of the general government being paramount to the laws and constitution of the several States, the Declarations of Rights in the separate States are no security. Nor are the people secured even in the enjoyment of the benefit of the common law.1

In the House of Representatives there is not the substance but the shadow only of representation; which can never produce proper information in the legislature, or inspire confidence in the people; the laws will therefore be generally made by men little concerned in, and unacquainted with their effects and consequences.2

The Senate have the power of altering all money bills, and of originating appropriations of money, and the salaries of the officers of their own appointment, in conjunction with the president of the United States, although they are not the representatives of the people or amenable to them. These with their other great powers, viz.: their power in the appointment of ambassadors and all public officers, in making treaties, and in trying all impeachments, their influence upon and connection with the supreme Executive from these causes, their duration of office and their being a constantly existing body, almost continually sitting, joined with their being one complete branch of the legislature, will destroy any balance in the government, and enable them to accomplish what usurpations they please upon the rights and liberties of the people.3

The Judiciary of the United States is so constructed and extended, as to absorb and destroy the judiciaries of the several States; thereby rendering law as tedious, intricate and expensive, and justice as unattainable, by a great part of the community, as in England, and enabling the rich to oppress and ruin the poor.4

The President of the United States has no Constitutional Council, a thing unknown in any safe and regular government. He will therefore be unsupported by proper information and advice, and will generally be directed by minions and favorites; or he will become a tool to the Senate—or a Council of State will grow out of the principal officers of the great departments; the worst and most dangerous of all ingredients for such a Council in a free country; From this fatal defect has arisen the improper power of the Senate in the appointment of public officers, and the alarming dependence and connection between that branch of the legislature and the supreme Executive.5

Hence also spurring that unnecessary officer the Vice-President, who for want of other employment is made president of the Senate, thereby dangerously blending the executive and legislative powers, besides always giving to some one of the States an unnecessary and unjust preeminence over the others.

The President of the United States has the unrestrained power of granting pardons for treason, which may be sometimes exercised to screen from punishment those whom he had secretly instigated to commit the crime, and thereby prevent a discovery of his own guilt.6

By declaring all treaties supreme laws of the land, the Executive and the Senate have, in many cases, an exclusive power of legislation; which might have been avoided by proper distinctions with respect to treaties, and requiring the assent of the House of Representatives, where it could be done with safety.7

By requiring only a majority to make all commercial and navigation laws, the five Southern States, whose produce and circumstances are totally different from that of the eight Northern and Eastern States, may be ruined, for such rigid and premature regulations may be made as will enable the merchants of the Northern and Eastern States not only to demand an exorbitant freight, but to monopolize the purchase of the commodities at their own price, for many years, to the great injury of the landed interest, and impoverishment of the people; and the danger is the greater as the gain on one side will be in proportion to the loss on the other. Whereas requiring two-thirds of the members present in both Houses would have produced mutual moderation, promoted the general interest, and removed an insuperable objection to the adoption of this government.8

Under their own construction of the general clause, at the end of the enumerated powers, the Congress may grant monopolies in trade and commerce, constitute new crimes, inflict unusual and severe punishments, and extend their powers as far as they shall think proper; so that the State legislatures have no security for the powers now presumed to remain to them, or the people for their rights.9

There is no declaration of any kind, for preserving the liberty of the press, or the trial by jury in civil causes; nor against the danger of standing armies in time of peace.10

The State legislatures are restrained from laying export duties on their own produce.11

Both the general legislature and the State legislature are expressly prohibited making ex post facto laws; though there never was nor can be a legislature but must and will make such laws, when necessity and the public safety require them; which will hereafter be a breach of all the constitutions in the Union, and afford precedents for other innovations.12

This government will set out a moderate aristocracy: it is at present impossible to foresee whether it will, in its operation, produce a monarchy, or a corrupt, tyrannical aristocracy; it will most probably vibrate some years between the two, and then terminate in the one or the other.13

The general legislature is restrained from prohibiting the further importation of slaves for twenty odd years; though such importations render the United States weaker, more vulnerable, and less capable of defense.14

1The Constitution lacks a bill or list of rights.

2In the House of Representatives there is only the shadow of representation; laws may be made by people who do not have the proper information or the confidence of the people.

3Even though the Senate can change tax bills and spend tax money, the Senate is not elected directly by the people and not answerable to them; Senate has too much power and there is no effective check on them.

4National courts could destroy the state courts; rich people could use the federal courts to oppress and ruin the poor.

5The Constitution does not provide for a council of advisors for the president; the president could be overly influenced by the Senate.

6The president has unlimited power to pardon for crimes, including treason.

7All treaties are the supreme law of the land, and are created by the president with advice and consent of the Senate. The House of Representatives, the only branch directly answerable to the people, is not part of the treaty-making process.

8Since commercial and navigation laws can be made by Congress based on only a majority vote, rather than a 2/3 vote, Congress may create monopolies or make laws that favor the industrializing North and disadvantage the South.

9Because of the necessary and proper clause, there is no adequate limitation on Congress’s powers. The powers of state legislatures and the liberties of the people could be in danger.

10There is no protection of liberty of the press or trial by jury in civil cases; nor is there protection against standing armies in peacetime.

11States cannot levy export taxes on their own exports.

12Even though the Constitution forbids ex post facto laws, legislatures at both the state level and national level will make such laws.

13The Constitution sets up an aristocracy that may later become oppressive.

14It will be 20 more years before Congress can stop the foreign slave trade.