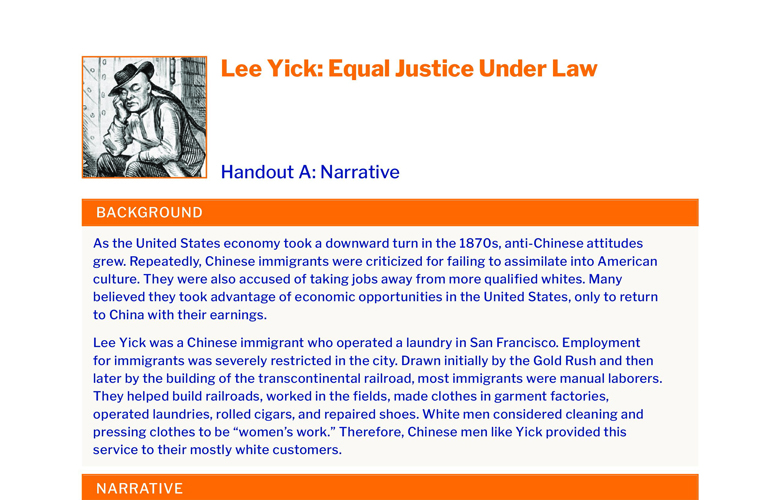 As the United States economy took a downward turn in the 1870s, anti-Chinese attitudes grew. Repeatedly, Chinese immigrants were criticized for failing to assimilate into American culture. They were also accused of taking jobs away from more qualified whites. Many believed they took advantage of economic opportunities in the United States, only to return to China with their earnings.

Lee Yick was a Chinese immigrant who operated a laundry in San Francisco. Employment for immigrants was severely restricted in the city. Drawn initially by the Gold Rush and then later by the building of the transcontinental railroad, most immigrants were manual laborers. They helped build railroads, worked in the fields, made clothes in garment factories, operated laundries, rolled cigars, and repaired shoes. White men considered cleaning and pressing clothes to be “women’s work.” Therefore, Chinese men like Yick provided this service to their mostly white customers.

Lee Yick walked down Dupont Street in San Francisco during the first week of July 1885. A Chinese national who had come to the city in 1861 to work, Yick had operated a successful laundry service for twenty-two years. He strode purposefully toward the entrance, just a few doors down at Number 318. It seemed like just any other day at work—yet Yick knew he was about to break the law.

As of the first of July, Yick no longer had permission from the city to operate his laundry. The wooden building had been inspected, and he had both fire and health certificates. Yet these approvals did not matter. The City Board of Supervisors had changed its regulations. According to Order No. 1569, passed May 26, 1880, all laundries in San Francisco had to be operated in brick or stone buildings. In the interest of public safety, the board determined, wooden buildings with laundry equipment posed too much of a fire hazard. To continue operating his business, Yick needed a special permit, which the board had summarily denied.

On its surface, the city ordinance looked valid. However, most of the buildings in the city were made of wood. Two-thirds of the laundries in San Francisco were owned by Chinese immigrants. When the Chinese laundry owners petitioned the Board of Supervisors to continue operating their businesses, all two hundred requests were denied. They faced fines and imprisonment if they continued. To make matters worse, all but one of the eighty non-Chinese laundry owners who petitioned the city were allowed to continue their businesses.

Yick was denied his permit to operate a laundry in San Francisco. When the Chinese worker continued to run his business, the sheriff of San Francisco obtained a warrant for his arrest and jailed him.

Rather than give up, Yick decided to challenge the system. He believed that the law—or, at least, its selective enforcement—was discriminatory and unjust. On August 24, 1885, he petitioned the Supreme Court of California to hear his case. He argued that he had been deprived of his right to personal liberty. The California Supreme Court, however, was not sympathetic. They concluded that the city had properly “regulated the places at which [laundries] should be established, the character of the buildings in which they are to be maintained, etc.” The court refused to discuss Yick’s constitutional claim.

Yick persevered. According to the Fourteenth Amendment, no state can “deprive any person of life, liberty, or property, without due process of law; nor deny to any person within its jurisdiction the equal protection of the laws.” He appealed his case to the Supreme Court of the United States.

Before the Court, Yick’s case was combined with the case of another Chinese laundryman named Wo Lee. The facts of the two cases were almost identical. It was now May 1886, and anti-Chinese feelings were as strong as ever. Yet Justice Stanley Matthews delivered the unanimous decision of the Court in the Yick Wo v. Hopkins case, stating, “The Fourteenth Amendment to the Constitution is not confined to the protection of citizens…These provisions are universal in their application, to all persons within the territorial jurisdiction, without regard to any differences of race, of color, or of nationality.”

The Court also agreed that the City of San Francisco was discriminating against the Chinese. Even if the law appeared impartial, “if it is applied and administered by public authority with an evil eye and an unequal hand…the denial of equal justice is still within the prohibition of the Constitution.” The Court had determined, without hesitation, that a law must be just on its face and in its application. If not, there was a constitutional violation of the Equal Protection Clause of the Fourteenth Amendment.

The decision in Yick Wo v. Hopkins was a landmark decision. Over time, it became the foundation for civil rights litigation, inspiring groups to demand equal treatment before the law. By pursuing his case, Lee Yick stood up for equal justice. He fought discrimination and helped establish a legal precedent—a turning point not only in constitutional law but also in the national quest to secure equal justice for all.